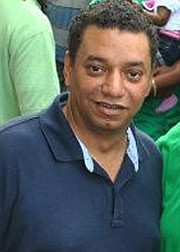 A WITNESS’ credibility and recollection of how businessman Kurt McCartney met his death was significantly challenged in Supreme Court on Friday by lawyers for those accused of the killing.

The Crown’s anonymous witness, who identified Thorne Edwards and Okell Farrington in court as two of the individuals he saw in Gambier Village on October 24, 2013, was cross-examined extensively by attorneys Terrel Butler and Philip Hilton, who suggested to him that his “false” testimony was being given for a self-fulfilling purpose.

The witness “AB”, who admitted that he had a criminal history, denied giving false evidence and maintained that he saw Edwards shoot McCartney while Farrington and two females got into the nearby Hummer and rolled over the victim and headed towards West Bay Street.

Edwards, 23, Farrington, 31, Lyndera Curry, 21 and Sumya Ingraham, 26, have been in custody since November 2013 awaiting trial for the murder and armed robbery of McCartney. A fifth person, Terry Delancy, the owner of Virgo Car Rental, was charged with being an accessory after the fact and is on $15,000 bail.

Maxwell Pinder, a resident of Gambier, told prosecutor Roger Thompson that on the night in question, he and his fiancée were having dinner when he heard a loud bang.

However, he paid no attention because children in the neighbourhood were playing with firecrackers at that time. It was not until he heard a loud thump that he went outside his home to see what had happened.

“I noticed someone lying on the ground.

“It was a bright male lying on the ground gasping for breath. I told my fiancée to call the police,” the witness said.

Pinder said that he went to the Last Man Standing Bar and asked people about recent events. He then left the bar and walked down to where people were already gathering around the scene.

Pinder said he saw a pouch on the ground, picked it up and took the phone out.

“The phone light up, I put it back,” he said, telling the court he wrapped the case in a brown bag and threw the phone over the fence in the yard.

Pinder said he didn’t see anyone outside the bar when he went there but there were four to five inside.

He said there were no credit cards in the pouch and admitted that he was going to take the phone for himself if no one had asked for it.

He agreed under questioning in court that the pouch was four feet from the body and that he wiped his fingerprints from it.

Witness “AB” gave evidence via videolink under cross-examination by Mr Hilton, saying he did not know anyone by the name Okell Farrington before October 24, 2013.

Mr Hilton asked him on what occasions he claimed to have seen his client.

“It was any part of August, September through the day time,” the witness said. “You had a conversation with him?” Mr Hilton probed. “Once I think” the jury heard. Mr Hilton suggested to him that this was false but “AB” maintained this was true.

The witness said he had driven to Gambier with three persons in a green Toyota Camry. He claimed he was initially at a restaurant in Sandyport when he received a call from Thorne asking for a ride.

He said he parked a few feet from Last Man Standing Bar, adding that he went inside after being seated in his car for 10 minutes.

He claimed to have seen nine individuals in the bar, two of whom were playing pool.

The lawyer asked him if the person he knew as “Werm”, and alleged was his client, was walking down the street with the man and the two women in the argument.

The witness said no.

After the shooting “AB” said he headed south in his car and went home, telling only his brother about the shooting and claiming he was in fear for his life.

“Were you in custody?” the lawyer asked. “AB” denied that he was arrested concerning this case.

Mr Hilton asked him if he was in custody on November 17, 2013. The witness said he was and clarified that his identification of Edwards and Farrington occurred four days earlier.

“You’re known to police,” Mr Hilton suggested to the witness. “Yes, sir,” the court heard. “You’ve been charged and convicted of many offences,” the lawyer suggested.

The witness agreed but denied that he was a stranger to the truth.

“I have no reason to lie to you,” the witness said.

Ms Butler asked him what he was doing in Gambier that evening. “I was asked by Thorne to drop some females up on that end, I was at Twisted Lime,” he said.

Ms Butler suggested he was changing his story as he went along with his testimony, but the witness said no.

“You said you went to Gambier with three persons,” the lawyer suggested. “Thorne and the two girls,” the witness answered.

Ms Butler asked for his signed statement to police to be put to him.

“Does it say that you gave Thorne and two females a ride?” the lawyer probed. “No it doesn’t,” the witness answered.

“And today is the first time you say you dropped Thorne to Gambier,” the lawyer suggested. “No, madam,” he answered.

“I am. I told the police everything I saw,” the witness said.

“There’s nothing in your statement about a dark girl and anybody having an argument,” the lawyer suggested. “No, madam. Not in this statement,” the witness answered.

“Nowhere does it mention anything about Thorne pushing the man and the man pushing Thorne,” the lawyer further noted. “No, madam,” the court heard.

The lawyer further suggested his statement doesn’t say he saw Thorne with a 9mm. “No, madam. Just a handgun,” the witness answered.

“What was the colour of the gun?” the lawyer probed.

The witness said it was a dark colour but when asked again said the gun was black.

However, he accepted that his statement did not contain him saying he saw a black gun.

“I’m going to suggest to you you’re not speaking the truth when you say you witnessed the shooting of Kurt McCartney,” the lawyer said. “Yes I did,” the witness said.

“You never said that in your statement. In fact, you looked away so you couldn’t have seen any shooting,” the lawyer put to “AB”.

“If the info (in the statement) is not true, why did you sign it?” the lawyer asked, before further suggesting that his entire testimony of the events that night were a lie.

“I’m suggesting y’all trying to get me to lie for y’all clients who killed this innocent man,” the court heard.