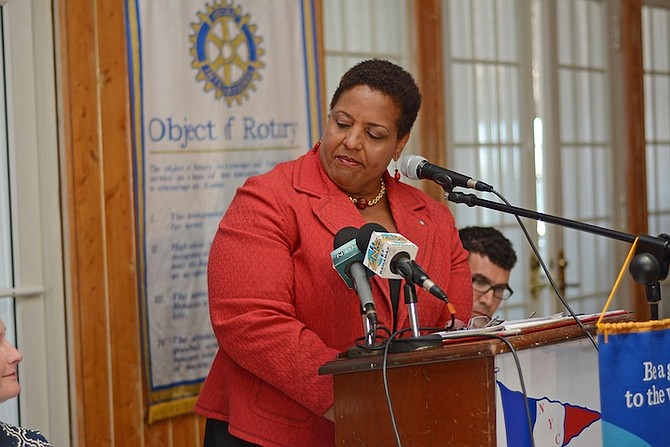 Mrs Butler-Turner was responding to a question about Mr Christie's remark, although she emphasised that she does not want to be critical so soon after one of the worst hurricanes in recent memory.

"I've heard this term 'teachable moment' around so much, I just find it incredible that you need to have that many lessons before you learn," she said.

"And so moving forward I think it's very, very important for us to stop talking about what we learned. We now have to start acting on what we know and we know many things but we just were inactive.

"I think it's really a cop-out for not acting. Those are my thoughts. I don't know how many lessons we need. We've been having hurricanes all our lives. How much more do we need to have teachable moments? We just need to do what is necessary. These are Bahamians. These are our brother and sisters. Wherever they are, we can't be learning at their risk and their expense. We have to, as a government, be protecting them."

Mrs Butler-Turner also said that while she has confidence in the capacity of top officials at government agencies like the National Emergency Management Association (NEMA), parliamentarians must be held to account for their own efforts to prepare people for the storm.

"When you talk about the government agencies, you must realise that there must be a level of autonomy for them to go about doing what they do," she said.

"I'm not sure what instructions they would have taken but I have a lot of confidence in the head of NEMA and in the head of many of those governmental agencies. I think if there is any blame that needs to be looked at, maybe we need to start examining ourselves as the leaders and government members to see if we actually were doing the right things. I think that is what we have to determine."

She added that not only will officials have to assess its rapid response protocols, but it will also have to audit its shelters around the country are some were compromised and left unopened during the storm.

Nonetheless, she stressed that now is not the time for "finger pointing".

"This is a time when we have an amazing co-operation of people and I don't want to break that spirit," she said. "I want people to realise that just with our collaborative efforts we can do amazing things. We can do our post-mortem after that and start pointing the fingers but at this time I don't wish to break that momentum."

Comrade Sister Loretta, one more step closer and your finger be pokin them right in their eyes. Some might wanna say, ya is but one short step away deliver-erin a Loretta smack to da eyes.

Loretta Butler-Turner was the first to respond to this Bahamian tragedy. All the other guys need to pull out their pencils and take notes. She has demonstrated real leadership in her position as an MP for a devastated community. No one has to wonder about what she stands for. I think she is Prime Minister material, no mater what the MCM's say. She is on the ground, in the media, on social media, and she has the support of the people and that's more that you can say for any of the other FNM's in the house with her. I applaud her efforts and all the private donors and the ordinary Bahamians who gave whatever they could. This is a galvanising moment in our country's history. It has also shown the gaping void of leadership we are faced with at this current moment. I continue to pray for my country. We will rise like the phoenix we are and we will be better, stronger and more united. Forward, Upward, Onward, Together.

Comrade not sure if you knows it or not but Forward, Upward, Onward, Together was the UBP party's slogan.

haha, you are retarded! So if that is the case why didn't your God Pindling change it? Sit small...

From CNN.com: "New York (CNN)A former president of the U.N. General Assembly "sold himself and the global institution he led" by allegedly pocketing more than $1 million in bribes to finance a luxury spending spree, according to a federal prosecutor.Preet Bharara, the U.S. attorney for Manhattan, said Tuesday the money allegedly was used to finance Rolex watches, custom suits, a BMW, a family vacation and even a private basketball court. The man at the center of the charges is John Ashe, the former U.N. ambassador for Antigua and Barbuda and General Assembly president from September 2013 to September 2014. Ashe, 61, is accused of tax fraud in an alleged conspiracy involving five others, including a billionaire Chinese businessman and a former deputy U.N. ambassador from the Dominican Republic, according to a criminal complaint. Ashe is accused of UNDERRPORTING his income by more than $1.2 million, prosecutors said."

Rolex watches and custom suits are so popular

good news here: our people still have their Rolexes they got from Lehder. But I think its good to know that the Chinese not only pay in the form of new Stadiums.

This woman is strong and on point. Her leadership in this crisis should be an example for the P.M. and his kleptocrates to follow. Sad the supposed leaders of this country are to busy enriching them and theirs to actually lead.

90% of this is self serving PR along with the stomach staples. Does one need to fly in a chopper if that weight could be better served carrying supplies!

Comrade Abaconian are you a member The Abacoians For Loretta Club, she says invited her to hold a meeting in March Harbour, that her leader Minnis was not invited to attend? Beside your charter membership in her special club - what else qualifies her be PM? Certainly not her performance as da minister for social services, or maybe you're thinking it was her now infamous slap of a fellow MP, or was it her nap time while seated in her seat up in da House?
I do apologize, if you think I just made up any of the above.