Johnson vs ‘Triple G’ Golovkin ‘could be our next fight’ 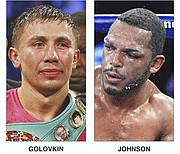 HE has petitioned for this bout for quite some time, and now reports have emerged that the Gennady “Triple G” Golovkin camp may give Bahamian boxer Tureano Johnson the fight he has been looking for.

Golovkin’s trainer, Abel Sanchez, told Fighthub TV that he would like for the current, unified WBA (Super), IBF, WBC (interim) and IBO middleweight champion to return to the ring as soon as February, and Johnson would be the likely opponent.

The main goal for the Kazakh fighter is positioning himself to face the winner of the Miguel Cotto vs Canelo Alzarez bout on November 21 but, with such a short turnaround time for his February timeline, Sanchez said fighting Johnson may be the targeted route.

“I would love for him to fight some time in February. If it’s not against one of those two guys, then against somebody else. Hopefully that’s allowable by the WBC. It’s up to the management and it’s up to the promoter to put that together and I hope it’s done, he said. “I thought he [Johnson] fought a great fight. Of course he’s rated really high in the organisation. We’d love to fight him. If they could put it together, then this could be our next fight.

Johnson’s posturing for the attention of the Golovkin camp may have proved beneficial but many boxing pundits see Johnson as just a minor roadblock on Triple G’s quests to unify the middleweight title.

With his recent decision over Eamonn O’Kane, Johnson has been a vocal number one contender for the IBF middleweight title.

“When that opportunity comes, you won’t be disappointed. I will definitely bring it and give all I can.

“I ain’t just going to fight Triple G for fighting’s sake. I’m going to beat Triple G. That’s what my gameplan is. I hope you all enjoy it. We’re going to make that happen.

“I definitely see a lot of things I can capitalise on when I watched David Lemieux and Triple G.”

Since his controversial loss to Curtis Stevens in April 2014, Johnson (19-1 with 13 KOs) has won five consecutive fights.

Golovkin, considered by most to be boxing’s fastest rising star, is 34-0 with 31 KOs.