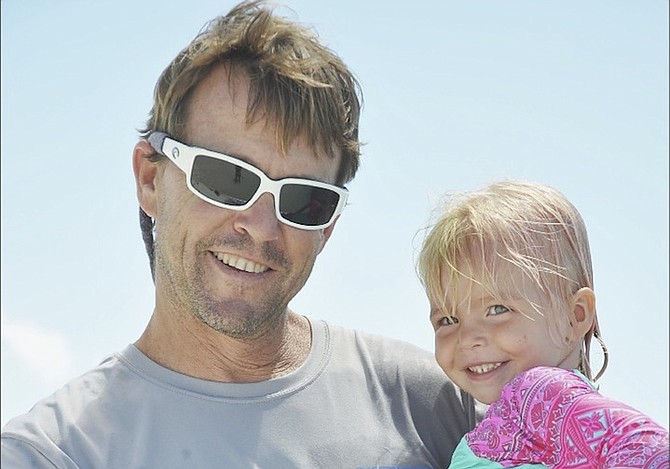 Christopher Dinnick, who is pictured with three-year-old daughter Meadow, faced a life-threatening infection after cutting his foot on a rock in stagnant water. The community rallied round to offer blood donations after calls for help - and he is now recovering from the serious condition.

Tangerine Dinnick and her daughter, Meadow, show The Tribune some of her family pictures in their Blair home yesterday. Photo: Tim Clarke/Tribune Staff

BOAT captain Christopher Dinnick is recovering in hospital from a life-threatening, flesh-eating bacterial infection after an “amazing” response to an urgent call for blood on social media.

Six weeks ago, Mr Dinnick, his wife Tangerine and their two young children were exploring on Egg Islands, off Eleuthera. “We were exploring like we typically do, we’re a very outdoors family,” Mrs Dinnick told The Tribune yesterday.

After a week Mr Dinnick, 43, developed a fever. “We treated it like it was the flu but the next day it got progressively worse,” his wife said. “We thought it was food poisoning, went to the clinic, his blood work was fine. They sent us home as if it was food poisoning. The next morning he looked so bad, it still hadn’t stopped so we went to the hospital where he was admitted because his blood work wasn’t right.”

The doctors spent two days trying to figure out what was wrong, with suggestions including salmonella poisoning or a blood clot. “It wasn’t until his stomach started stenting out that they said they needed to go in for surgery. That’s when they found ... flesh-eating bacteria which had triggered other things in his body as well.”

Mrs Dinnick received a call that there was an urgent need for blood at Doctor’s Hospital to treat Mr Dinnick, so she turned reluctantly to Facebook to get the message out. “Social media is a Catch 22. I had to put my husband’s life out for the whole public to know about,” she said, describing her husband was a very private person and the decision to turn to social media as very hard.

“The amazing response was overwhelming, to the point where the blood bank turned away people. The blood banks were filled, I think, six times.” Mrs Dinnick said that people in Spanish Wells were concerned so they hosted a blood drive and 100 people screened in two days to produce 60 units of blood. Mr Dinnick’s boss at Lyford Cay donated the plane to transport the blood and Bahamas Fast Ferries helped with the medical technicians’ travel.

The doctors put Mr Dinnick into a medically-induced coma and for a while he was unable to breathe on his own. During that time Mrs Dinnick and the children, Meadow, three, and Thatcher, seven, played messages to him to aid his recovery.

She said people had helped in every way they could, including looking after the children and every night cooking a meal for her, and was overwhelmed by the kindness shown to her. “These people don’t have to do this, be kind. It’s all about ‘community’ and I’m truly grateful.”

Among those who posted calls on Facebook for blood donors were the New Providence Community Church, the National Art Gallery of the Bahamas, Lightbourne Marine, and the Lyford Cay International School.

Now, Mr Dinnick is being referred to as “wonderboy and miracle man” and is on the road to recovery. The doctors have told him that his age and health have been crucial to his ability to recover. He is receiving visitors in the hospital and his family is grateful to hear his voice again. However, Mr Dinnick’s hearing has been affected by the medicine and he will need aids to help in restoring it.

His wife has been humbled by the response to a desperate situation as she is appreciative of everyone who has shown concern in both big and small ways.

“The message is just opening people’s eyes to the blood bank because it surely opened mine. If it wasn’t for those donors, he wouldn’t have made it,” she said.

The main wish now for the Dinnicks, who live in Blairwood, is to bring awareness of the possible problems that can come from stagnant bacteria-filled water.

“Doctors Hospital was amazing with their work. Their team was determined to make Chris feel better. To give back to them, we’ve decided to give out shirts that read ‘Team Dinnick’ to the staff,” Mrs Dinnick said.

She said that Mr Dinnick, when faced with a crisis, keeps faith and focuses on seahorses. “I called him the ‘seahorse warrior’ the whole time just because he was hallucinating seahorses. Seahorses are incredible creatures, that’s the one good thing when you read up on them. They hold on through the stormy weather. It just gave me a little bit of hope knowing that that creature was some sort of visual for him.”

As a boat captain, Mr Dinnick knows plenty about holding on through a storm.

Um wth, nip this of its native. Never heard of it here.

Glad to hear he was saved from the flesh eating bacteria........but now his family's bank accounts have to be saved from the money eating exorbitant bills Doctors Hospital will be sending his way! Unless he has rarely obtainable good health insurance coverage, he and his family may end up wishing the bacteria did him.