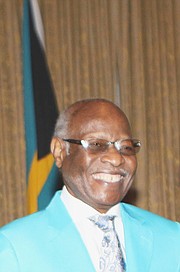 ONE day after the Bahamas Association of Athletic Associations and the Bahamas Olympic Committee laid to rest one of its longest serving members, Bernard Livingstone ‘Winkie’ Bostwick, the two bodies are mourning the death of Rev Enoch Backford II, the last surviving member of the first team to win a medal for the Bahamas in international track and field competition.

Backford, a former educator and minister of religion, was an elite sprinter who eventually became an executive in both the BAAA and BOC. He passed away yesterday morning, aged 77. He was the last surviving member of the men’s 4 x 100 metre relay team that competed at the 1957 West Indies Federation Games in Jamaica, winning the first international medal for the Bahamas with their bronze. The team included Tom ‘The Bird’ Grant, Oscar Francis and Thomas A Robinson, all three pre-deceased Backford in 2012.

When contacted, Butler was in shock of Backford’s passing.

As a politician, Butler said he gave up the reigns of the BAAA presidency to Backford, who was more neutral in the sport. But at the time, Butler decided that he would stay on as the BOA president and Backford came on board as one of the vice presidents. Together, they served for a number of years.

During the days that he competed on the local scene, Backford had one of his most memorable days at the Empire Day Sports Meet at the Western Fort (Clifford Park) in 1955.

“That’s when Tommy beat the crew including (former champion) Leonard “Skeeter” Dames for the first time. I’ll always remember also that I was anchoring the relay for the Southern Athletic Club and Rinky (Irrington Isaacs) ran me down. I’ve never forgotten that,” he was quoted as saying in a recent interview.

“What people didn’t know then was that I suffered from an asthmatic condition. That’s why I always had my quick start, nevertheless, there were good days and bad days in running the full distance, but I never said anything. Crawford always said if you were not ready then don’t go in the race so I never complained.”

On Friday, November 22, Backford was one of 21 persons inducted into the National Sports Hall of Fame, hosted by the Ministry of Youth, Sports and Culture. Also included in the class was Bostwick, who was laid to rest on Sunday.