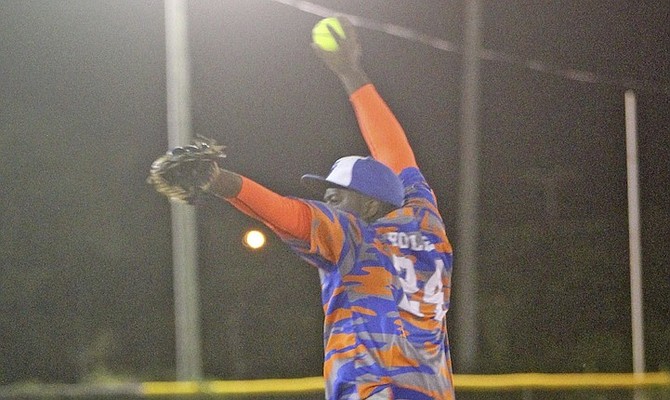 THE BTC Elite Warriors avenged one of their only two losses so far this year in the New Providence Softball Association men’s division by stopping the Chances Mighty Mitts 15-3 with a couple of home runs from a pair of siblings to keep in front of the leaderboard as the regular season starts to wind down.

Meanwhile on Saturday night, the ladies’ front-running Sunshine Auto Wildcats took advantage of the slug fest late in the opening games in the Banker’s Field at the Baillou Hills Sporting Complex to eventually rout the Lady Stingers 29-19 in an abbreviated, error prone game as well.

BTC exploded for a 9-3 lead though the first three innings and they waited until Victor Grant came on the mound and made him pay for their last defeat to the Mighty Mitts by ripping another six runs of the opposing team’s ace pitcher to force the stoppage in the fifth inning.

Sherman Ferguson blasted a two-run homer and his younger brother Jeffery Woodside followed with a three-run shot, leaving everybody trying to guess which one went further as BTC dialed up a total of 10 hits in 27 at-bat appearances at the plate. They also had four walks and strike outs and left only three runners stranded on base, while committing only two miscues.

Not a bad day in the office, considering that the Warriors needed the win to make a statement to the rest of the league, according to manager Erin Adderley.

“It was good to get back and continue our winning ways,” Adderley said. “They’re a pesky team. They hit the ball very well and it’s very difficult to hold them to five or six runs, but tonight we were able to do that. My guys are a pretty strong offensive team and we proved that tonight.”

Avery Rolle went the distance, giving up five hits, walking one and striking out another for the win on the mound. Newton suffered the loss after giving up seven hits with nine runs, two walks and three strike outs in two and a half innings before Grant came in and tried to pull off another upset, but he gave up three hits on six runs, walking two and striking out in the final 2.1 innings in the stoppage.

“The two losses we got this year, it’s good that we got it then because we learned a little more about ourselves as individuals and as players and as a team and even as a manager and coach. I think I learnt a little more from the players as a team so that when we do get to the playoffs and championships, I would not put them in a position where they are not comfortable or where I have not used them in the regular season.”

Adderley is also going to have to look at making a slight adjustment to his line-up with shortstop Ken Wood now out with an arm injury that he sustained in a slow pitch game. But Adderley is confident that with the personnel he has to work with, they can weather the storm.

Wasn’t sure whether it was a football or softball game between two competitive teams, but the difference was in the stat line where Sunshine Auto wracked up 18 hits and committed only three errors. Their opponents were just as potent with 17 hits, but they had 10 miscues in a game that started out an all-out brawl. The Stingers drew first blood scoring 14 runs in the top of the first and the Wildcats responded with 13 in their half of the frame.

The Wildcats went on to outscore the Stingers 4-2 in the second and 4-3 in the third before batting around the clock in the fourth for a 8-0 surge in the fourth to complete the walk-off-the field abbreviated win.

On their way to the stoppage in the fourth, Wandalee Burrows led off with a single, Renee ‘Sunshine’ Davis and Mary ‘Cruise’ Sweeting both had a two-run single before Burrows came through in her second plate appearance for a two-run double and scoring the game’s final run on Maryann Ferguson’s run-producing single.

“We started off flat. We knew that this team didn’t have a pitcher and so we under-estimated them,” said Wildcats’ manager Anthony Bullard. “But when you start making errors, the only thing we could rely on was our hitting. I think if we face another team with pitching, that can’t happen (giving up so many runs early in the game). That won’t happen.”

Although their focus is not always on winning the pennant, but rather getting ready for the playoffs, Bullard said they like the position they are in as the front runners and he’s confident that if they can tighten up one or two areas, they should be in a much better position to get the job done.