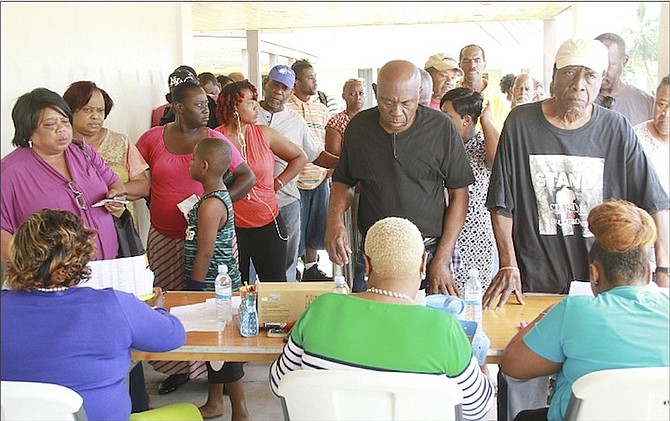 CLICO (Bahamas) policyholder Bishop Simeon Hall yesterday expressed relief that the CLICO debacle is finally at an end, comparing the gratification of the long-awaited financial resolution to having “delivered a baby”.

Other former CLICO policyholders also expressed their pleasure in finally recovering some of the “hard-earned money” they would have previously invested into their respective policies.

Bishop Hall’s comments came at the Holy Cross Anglican Church, Soldier Road, where he and hundreds of other former CLICO clients gathered to recover at least a portion of their life savings and long-term investments, all of which were lost when the life and health insurer collapsed into insolvency in February 2009.

Last month, Prime Minister Perry Christie promised that a collective $16m cash payout would be issued to victims of the CLICO (Bahamas) debacle before the end of March.

Prior to his announcement, Bishop Hall had been vocal in urging the government to honour its promise to provide a resolution for the thousands of policyholders who lost money when the company collapsed.

“Personally I am glad that it has come to this juncture,” Bishop Hall told The Tribune yesterday. “What I saw here today made me personally glad that I got involved as a pastor.

“Not for myself, but as a pastor. Pastors are trained to be empathetic, to get involved, to feel what people feel.

“The lady in a wheelchair, the man with a walking cane, and all this, these persons have been marginalised for seven years.”

When asked about the length of time it took to get to this point, Bishop Hall said: “Better late than never. I’ve been in it, and I’ve raised some concern, and thank God it’s over. I do feel like I’ve delivered a baby.”

Another policyholder told The Tribune that while he was initially sceptical over whether or not Mr Christie’s promise would “materialise”, it felt “good” to know that policyholders will get some sort of relief from “hard money that you’ve put into the policy.”

“You could always use money.

“Things rough out there so everybody could always use money, so better late than never.”

Anything owed above this sum will be paid off via the issuance to former clients of seven-year promissory notes (government bonds), which will provide them with quarterly insurance payments at the prime rate (4.75 per cent).

Vaughn Culmer, CLICO (Bahamas) operations manager, told The Tribune yesterday that the issuance of the government bonds will “hopefully” take place “within the next few months.”

The payout process will continue at the Holy Cross Anglican Church today and Saturday, and will continue from Monday to Wednesday next week.

The operation then moves to Grand Bahama next Friday and Saturday, with those in Freeport to be handled at the former office of CLICO (Bahamas).

I am still unsure about where the money is coming from...Is this another dip into NI funds or VAT $$$? Did Clico have an insurance policy to safeguard the client's investment? We can sympathize but we should not be held responsible for others' losses"gambling" their assets with these Johnny-come-lately companies. "IF IT SOUNDS TOO GOOD TO BE TRUE, IT PROBABLY IS!"

The moral hazard behind this wrongful bail out of private stakeholders in CLICO by the Bahamian Government using funds in the form of high interest paying government bonds/obligations of Bahamian taxpayers will undoubtedly have serious unintended consequences. Why should we, Bahamian taxpayers, be bailing out the losses incurred by the holders of insurance policies and investment annuities issued by any insurance enterprise that was privately owned and controlled prior to its bankruptcy? Whether the regulatory apparatus failed to protect the stakeholders in CLICO from the losses incurred by this public interest entity is completely irrelevant ......our government simply has no right to pick winners and losers among us when it comes to the outcome of our own personal investments, period! It is this same warped mentality by our government that has allowed the corrupt lending practices at Bank of The Bahamas to occur, costing all honest hard working Bahamian taxpayers mega millions of dollars in the form of investment losses incurred by National Insurance and added debt/bonds issued by the government in order to fund and/or prop up the now seriously impaired and deficient capital structure of BoB. The corrupt Christie-led PLP government thinks it has the right to take from Peter to pay Paul whenever it thinks its is politically expedient to "buy" votes. Doing so is outright theft from Bahamian taxpayers and from National Insurance fund contributors for the purpose of paying bribes for votes and for other political favours!