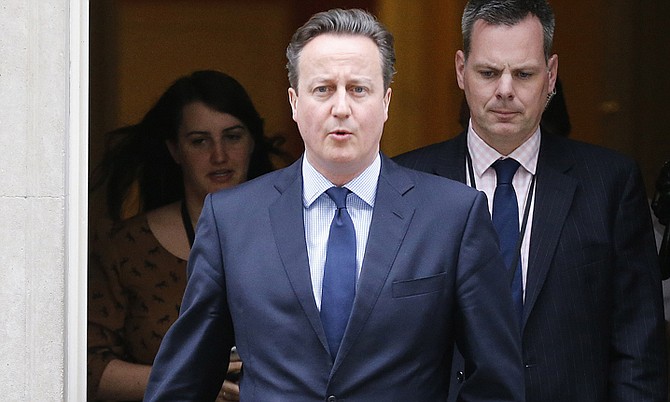 BRITISH Prime Minister David Cameron faced mounting pressure on Friday over his involvement in offshore investments after he finally admitted he benefited from his father’s Panama-registered trust, an entity exposed by this week’s massive data leak at a law firm specialising in global tax avoidance.

Lawmakers from opposition parties demanded that Mr Cameron tell the House of Commons whether he holds, or held, other similar investments in trusts beyond the reach of the British tax system.

The issue - which has ensnared scores of leaders, stars and others since Sunday’s unprecedented leak of 11.5 million documents from clients of law firm Mossack Fonseca - is causing particular damage to Mr Cameron, who for years has campaigned prominently for a crackdown on global tax avoidance.

After three days of obfuscating statements, Mr Cameron admitted on Thursday night that he had sold more than 30,000 pounds (about $48,450) in shares in his late father’s Blairmore Holdings, an investment vehicle that Mossack Fonseca helped organise in the Bahamas. Cameron said he bought the shares in 1997, the year his Conservative Party was ousted from power, and sold them in 2010 shortly before his party returned to office with him in the top post.

The Guardian, a British national daily newspaper, had reported that Ian Cameron, father of the Prime Minister, had served as a director of Blairmore Holdings until shortly before his death in 2010. Incorporated in Panama but based in the Bahamas in the 1980s, Blairmore Holdings Inc retained up to 50 Caribbean officers each year, according to reports.

“Their job was to sign paperwork and fill roles such as treasurer and secretary. They included the late Solomon Humes, a lay bishop with the non-denominational Church of God of Prophecy. He acted in various roles including vice-president over a number of years from the mid-1990s,” the report read.

“Through the Bahamas branches of Coutts and later SG Hambros, Blairmore retained dozens of local residents. There is no suggestion this arrangement was illegal and it was used by other offshore funds at the time. The signatories were authorised to perform complex financial tasks. They could, company minutes state, “sell or buy any stocks, shares, annuities” and even “precious metals”,” the report read.

However, the documents purport that big investment decisions were taken in the UK. The report read: “Board meetings were held every year in Nassau and Switzerland, often in the five-star Hotel Beau-Rivage in Geneva. While the Europeans regularly jetted out to the Caribbean, there is little evidence of travel in the opposite direction, raising questions about how much the Bahamas directors contributed to strategy and decision making.”

According to reports, Blairmore moved from Panama to Ireland in 2012 and still exists today, with more than $31m (£22m) under management. The Guardian confirmed that the investment fund has never paid tax in the UK on its profits.

Tom Watson, deputy leader of Britain’s opposition Labour Party, said nobody believed this was David Cameron’s only involvement in profiting from offshore investments. He and many other lawmakers called on Mr Cameron to publish not merely his recent annual tax returns - something he has pledged to do - but also details of his investment portfolio since 2005, when he became Conservative Party leader.

“This is the man who is making the rules and living his life to a different set of rules,” said Mr Watson, who recalled Cameron’s 2013 speech denouncing offshore tax evasion. “He heralded the new age of transparency. He said sunlight is the best disinfectant. Why doesn’t he just step out of the shadows, into the sunlight, and reveal his investment portfolio since 2005?”

Opposition leaders called on the Prime Minister to address their demands with a statement to Parliament on Monday.

Cameron has declined to give other interviews on the matter since his Thursday night statement to ITV News. But party colleagues leapt to his defence on Friday, arguing that their leader simply had wanted to shield his father from unfair criticism. Ian Cameron, a stockbroker, died in September 2010 leaving savings valued at 2.75 million pounds ($4.28 million), much of it in offshore investments.

Rich and influential people worldwide have found themselves under siege since the massive breach of data security at the previously little-known Panama firm of Mossack Fonseca.

The uproar has brought down the Prime Minister of Iceland and raised questions about the presidents of Argentina and Ukraine, senior Chinese politicians, and the circle of friends of Russian President Vladimir Putin.

The Organization for Economic Co-operation and Development (OECD), which represents 34 of the world’s most developed countries, is convening a meeting of tax officials in Paris on April 13 to discuss what action to take. The OECD said on Friday that it will “explore possibilities of co-operation and information-sharing, identify tax compliance risks and agree (on) collaborative action in light of the Panama Papers revelations.” The organisation has already formed a network of tax officials from around the world who have pledged to work with each other to crack down on tax evasion.

Pierre Moscovici, who oversees financial affairs for the 28-nation European Union, this week threatened to impose sanctions on Panama, as well as other nations facilitating tax avoidance, if they don’t co-operate fully to fight money laundering and tax evasion. Panama is listed by the EU as a country that is not cooperative on tax issues.

The Bahamas has been named a key tax haven for some of the world’s wealthiest people who sometimes seek to launder money, dodge sanctions and evade tax, according to leak of the confidential documents that reveal how some international power-players hide their wealth. According to data from the International Consortium of Investigative Journalists (ICIJ), which help to analyse the data, the Bahamas is listed as the third most popular tax haven used by the law firm, behind only the British Virgin Islands and Panama.

Sounds like Ping, his cronies and the inheritors of his mantle - but not nearly as corrupt!

Let's be clear, it was Cameron's father who set up the offshore trust fund. Cameron Jr sold his stake (gifted from his father) shortly before being elected PM, and (how fortunate for him) there was no capital gains tax to be paid. So there was nothing illegal under the laws of either the UK or the Bahamas. Where I have a problem is (i) that he has called out other people in the past for using offshore structures, so he is basically a huge hypocrite, and (ii) at the same time he has put us in the spotlight as being some kind of dodgy tax haven, when the truth of the matter is that the Bahamas is one of the most highly regulated jurisdictions in the world. It is far more difficult to open a new account here than (for example) in Delaware, the Channel Islands, England or Canada

Now ........... if Cameron is forced to step down as PM or even worst resign his Parliament seat in Britain ....... then it will give us a clear standard by which to judge Perry and his bunch of wannabe British copycat politicians ............. our politicians like to copy the pomp and pageantry but not the British gentleman standards of responsibility, accountability and respectability ....... the PLP like to hide behind their blackness and ghetto excuses to remain in power

Politicians and bankers are the biggest crew of pirates on the planet!

Its now totally understandable why government continue to allow RBC, BNS and FCIB to rape the Bahamas with no KY-Jelly!

These hypocritical, conniving, crooks have a special set of rules dodging taxes, money laundering and hiding corrupt income for themselves and another set of rules that screw everybody else.

Hopefully the whole lot of them end up in prison where they belong. About damn time too!