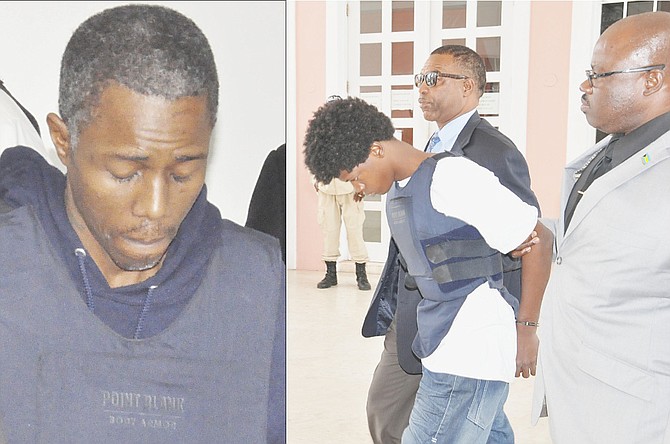 TWO Freeport men were arraigned yesterday in Magistrate’s Court in Grand Bahama on multiple murder charges and a number of serious offences.

Grand Bahama police reported that Renaldo Hudson, 19, of Tasmin Circle, was arraigned before Magistrate Debbye Ferguson in Freeport on three counts of murder - including that of customs officer Kevin Hanna on March 31 - and one of attempted murder. He was not required to enter a plea and the trial was set for July 6.

Hudson also pleaded guilty to a charge of possession of an unlicensed firearm and ammunition. He was sentenced to four years at the Bahamas Department of Correctional Services (BDCS).

He was also arraigned in Magistrate’s Court 2 on murder and armed robbery charges. The matter was adjourned to July 4 for a preliminary enquiry and Hudson was remanded to the BDCS until trial.

Tavares Beckford, 39, of 4 Caneby Terrace, was arraigned before Magistrate Rengin Johnson on a count of murder, for which he was not required to enter a plea. The matter was adjourned to June 7 for a preliminary enquiry.

He was also arraigned before Magistrate Gwendolyn Claude at the Eight Mile Rock Magistrate’s Court on two counts of attempted murder and one of possession of a firearm with intent to endanger life. The matter was also adjourned for a preliminary enquiry to June 9.

Beckford was remanded to the BDCS until trial.