PLP chairman hits out at opponents to bill 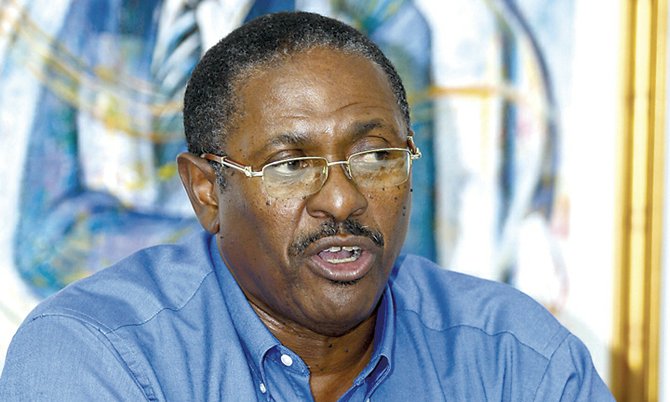 PLP Chairman Bradley Roberts said the Save Our Bahamas group did not have any evidence to support its opposition of the fourth Constitutional Amendment Bill.

Mr Roberts said the religious group did not have a good reason for opposing the bill, which seeks to end discrimination in the Constitution based on sex. Questions based on the four bills will be put to the electorate in a referendum.

He urged Bahamians to pay close attention to the facts so as not to get distracted by the “tremendous amount” of misinformation that will be placed in the public domain.

Mr Roberts said all Bahamians that love freedom and equality should vote yes at the polls on June 7.

“A group of ministers of the gospel known as the Save Our Bahamas Committee are urging Bahamians to vote ‘no’ on bill number four because they claim the passage of this bill will open the Bahamas up to same sex marriage,” he said.

“The problem is, like all of the other critics, the committee has failed to offer a scintilla of evidence based in Bahamian law.

“The committee makes no reference to our 1973 independence Constitution, particularly our Matrimonial Causes Act which in fact saves bill number four from the very same thing critics are arguing bill number four will open the Bahamas up to.”

He added: “Accusing our parliamentarians of hiding behind the judiciary is not a good reason for opposing bill number four.”

He spoke at the monthly meeting of the party’s Fox Hill branch on Monday night, where he expressed his support and endorsement of MP Fred Mitchell in the 2017 general election.

The committee urged voters against being duped by the government’s “diabolical” plot to allow for same-sex marriage under the guise of gender equality. The committee said it was convinced, given the precedent set in other countries, that the fourth bill would open the door to legalising same-sex marriage in the Bahamas despite the government’s continued assurance that it would not.

The government has maintained that the controversial amendment would not lead to same-sex marriage, stating that it would ensure that Bahamian men and women were equal under the law. By law, under the Matrimonial Causes Act, marriage in the Bahamas must be between a man and a woman.

Bishop Walter Hanchell of Great Commission Church has also formed a group, Citizens for Justice, which opposes both the fourth and second bills.

Mr Roberts also said: “I urge all Bahamians to look clearly and closely at the facts in making their decisions as there will be a tremendous amount of misinformation placed in the public domain over the course of this YES Bahamas campaign and so Bahamians must remain focused and vigilant.

“We are all freedom loving people and that treacherous journey to social justice particularly between 1834 and 1967 culminated in a very hard fought victory and we cannot and must not turn the clock back on human rights and equality.

“I support more rights for all Bahamians, not less rights and I support these four bills without reservation because their passage will make us all equal under our Constitution,” Mr Roberts added.

F..K bradley roberts and the plp. they don't have clean hands to be able to lecture anyone on a referendum. Get the facts and vote your conscience

Mr. Roberts! Just because many of us will be voting yes in this referendum will not let you and your bunch of degenerates off the hook come election day. June 7th ain fa y'all,its for them. You'll gettin y'all own next year and it ain ga be yes, ain' long now!

My goodness... these Bills are so simple, even Bradley Roberts understands them.

Did they "pay close attention to the facts" in 2002 when they voted yes and then jumped on the vote no bandwagon? My fear here is that they will take credit and consider it a win for the PLP as opposed to seeing it for what it really is. These degenerate asses make everything about politics while the people they serve suffer.

Don't let all the legalese talk fool you guys. For those who are concerned about bill number 4, indeed it can be reinterpreted, since right now, the world is starting to merge the words "sex" and "gender" to be the same thing. Take this statement from a recent article based in the USA:

"U.S. Justice Department's ruling that not allowing students to choose bathroom or locker room facilities based upon their gender identity is sex discrimination."

I believe that those who are against gay marriage are wise in questioning bill 4, regardless if people agree with them or not. Just how they left the language on the last referendum for interpretation, bill 4 is no different.

If the PLP wants you to vote YES for something then you gotta gotta know it can't be good for you, your family, or the country.

These proposed amendments to our constitution are much more about granting legal immigration status to thousands and thousands of foreigners rather than equal rights for men and women. The corrupt Christie-led PLP government has failed to deliver on its promise of jobs and many unemployed or under employed Bahamians would never be able to get decent paying jobs as a result of the great influx of foreigners that would occur if these amendments were made to our constitution. Our economy is simply too anemic to absorb legalizing the status of thousands and thousands of foreigners. Already there are just way too many Bahamians without decent paying jobs necessary to feed, clothe, educate and afford medical care for their children and other family members. I know I will be voting a resounding "NO!"

Big Bad Brad, who is well known to have had his way with more than one woman, is dead wrong in his reasoning and advice, and he (like Sean McWeeney, Rubie Nottage, Sharon Wilson, Vomit et al.) knows it. Take proposed amendment number two for example. Harvey Tynes QC has already pointed out that a foreign man should not be able to acquire Bahamian citizenship and the right to vote just by marrying a Bahamian woman. This grave mistake would only serve to amplify and compound the very serious mistake that already exists in our constitution whereby a foreign women marrying a Bahamian man automatically acquires Bahamian citizenship. The act of marriage should not be synonymous with obtaining citizenship and voting rights. These two things, marriage and citizenship, are very different things and two wrongs certainly do not make a right. If anything, our constitution should be amended to remove the original mistake so that a woman does not automatically acquires citizenship and voting rights upon marrying a Bahamian man. The other three proposed amendments all carrying equally dire consequences for our country and the way of life of Bahamians; some intended and others not. I am compelled to vote "NO" for all four of the proposed amendments and every Bahamian voter who cares about their country would be wise to do likewise.