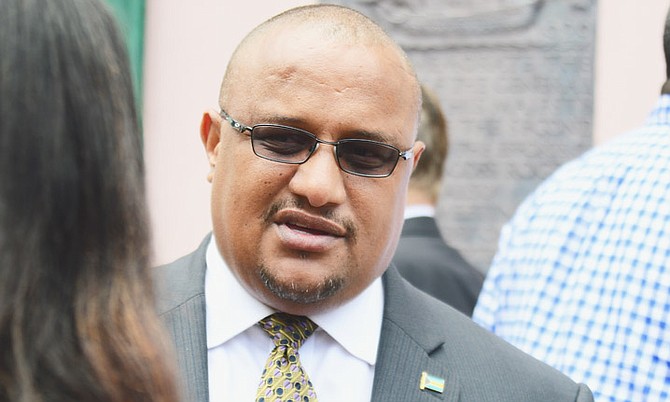 SOME parliamentarians are pushing the passage of the constitutional referendum’s fourth bill because of their homosexual identity, Marco City MP Greg Moss suggested to a group of pastors yesterday.

His comments came during a forum for pastors hosted by the Save Our Bahamas committee, a group pushing Bahamians to vote “no” to the fourth proposed constitutional amendment, which aims to prohibit discrimination based on sex by inserting the word “sex” into Article 26 of the Constitution.

“Anybody who doesn’t understand that we have people in the House [of Assembly] right now who are living a lifestyle they want to justify and validate by the passage of this legislation is just closing his eyes,” Mr Moss said to applause from most of the nearly 50 pastors who attended the event at Evangelistic Temple.

“We have people in the House right now who are determined that if this is their last session in the House, their swan song will be that they brought their community into preeminence through the Constitution and they protected their right to really live their lifestyle after they’re finished with the House. This is what’s going on.”

Mr Moss argued that parliamentarians don’t have the “guts” to pass a law allowing same-sex marriage through Parliament, therefore they are promoting a platform that would allow the decision to be made by the courts.

He was referring to the London-based Privy Council’s previous decisions on capital punishment. The Privy Council is this country’s highest court of appeal.

Even as some prominent religious leaders like Bishop Neil Ellis and Bishop Laish Boyd have urged Bahamians to vote “yes” to all four questions in the referendum, yesterday’s pastors forum revealed hostility from many pastors toward the upcoming vote.

At one point, a pastor rose to his feet and stressed that the church should reject all of the Constitutional Amendment Bills, not just the fourth one.

“If the church is going to be against one bill, we should be against all,” the pastor said to scattered applause.

The government rejects the idea that the fourth bill could lead to same-sex marriage.

The word “sex” refers only to one’s status as male or female, officials have said, not sexual orientation.

Disagreeing with this, Mr Moss said: “My sex cannot just be me standing around looking in the mirror at what God gave me. My sex has to be much more than that. My sex is my sexuality. It includes the way I express myself, my sexual orientation; and if you give me that word as a lawyer I gon’ run a train through it.”

Mr Moss also criticised the Christie administration’s decision to use public funds to fund the YES Bahamas campaign but not the campaign pushing for a “no” vote.

When asked by a pastor if the government should be sued over this, he pointed to a related case in Ireland and said local courts would rule it unconstitutional to use public funds in such a one-sided way.

However, he said they would not grant an injunction nor award costs to the winning party.

“If you expect to go and get money from the government to campaign against the government, that clock would run out on you and the referendum would be held long before that questioned is determined,” he said.

The first bill would give Bahamian women who are married to foreign men the right to pass on their Bahamian citizenship to any child of that union no matter where that child is born. The Constitution currently says that only Bahamian male citizens by birth have that right.

Bill two would give a Bahamian woman married to a foreign man the right to secure for her husband the same access to Bahamian citizenship as a Bahamian male has in relation to his foreign wife.

Bill three would grant any unmarried Bahamian man the right to pass on his Bahamian citizenship to any child he fathers with a foreign woman with proof of paternity.

The referendum will be held on June 7.

Moss is absolutely correct: The fourth proposed amendment as currently worded would indeed result in same-sex marriages being forced on our society by the courts. This is precisely why Sean McWeeney has deviously and persistently refused to change the fourth amendment to unequivocally define marriage as being a matrimonial union between a man and a woman only, to the exclusion of all other forms of union involving a man with a man or a woman with a woman.

The other three proposed amendments are much more about granting legal immigration status to thousands and thousands of foreigners rather than equal rights for men and women and men with men and women with women. The corrupt Christie-led PLP government has failed to deliver on its promise of jobs and many unemployed or under employed Bahamians would never be able to get decent paying jobs as a result of the great influx of foreigners that would occur if these amendments were made to our constitution. Our economy is simply too anemic to absorb legalizing the status of thousands and thousands of foreigners. Already there are just way too many Bahamians without decent paying jobs necessary to feed, clothe, educate and afford medical care for their children and other family members.

I know I will now be voting a resounding "NO!" to all four of the proposed amendments.

Ah mi Dios! And some are pushing against it in an attempt to hide their homosexual identity Moss. Goodness the dishonesty in this country is putrefying.

I believe that voting yes to the first three bills are in the best interest of the country, especially for Bahamian women and children. However, I agree with voting no to the last bill. Moss's and the Pastors' fears and suspicions are warranted and many examples can be drawn from whats happening in Europe and in the USA based on how they interpret and reinterpret their constitution. Also, the privy council would gladly support and vote in favor of same sex marriage. No argument there.

This government and its cronies know full well what they intend to do. . .SAME SEX GETTING MARRIED is where they want that to go!!

Comrades, even if it’s true some parliamentarians are pushing for the passage of the constitutional referendum’s fourth bill because of their homosexual identity, it couldn’t possibly foil the Tribune’s hilarious breaking news headline “Going undie-cover? Suspect had kids’ underwear as a mask."
Comrade robbery suspect, were there not at least one cutie, skimpy, sexy ladies thong in one D'Aguilar's super dryers? Did you really have grab another guy's drawers, shield ya tiefing identity?
May God help you to sustain da teasing from your fellow inmates, if you does eventually make your way up Fox Hill as a held captive of the state.

lol, TAL i also had a good laugh at that picture and the article!

Why do you think MOFA Fred Mitchell supported the present Commonwealth Secretary General??????? ................... because it is her agenda to have LGBT decriminalized throughout ALL Commonwealth countries during her FIVE year term (2015-20) ...... You will never hear Fred Mitchell or Obie Wilchcombe deny that Bill #4 will not legalize same-sex marriage

And what was Moss' hidden agenda when he joined the PLP??? To get rich fast?? I do not trust or listen to anyone who has been a part of the PLP government. This government did not just turn bad overnight. Moss knew what he was joining. If you join a gang knowing that they are all crooks and thieves, then you are just as guilty as the gang. So STFU Moss!!!

Not to give Mr. Moss any credits right but if you enter an establishment that appears to be of good doings and deeds you would get comfortable and relax until you find out that this place is an devil place disguise as and angel. The big question is after finding out that your in a dark place what would you do? stay and sell your soul or would you leave and try to break that establishment down?

Now they want legal rights to flaunt their Godless lifestyle more than they splash around now!

While everyone main concern is just strictly based on rather bill four what lead to gay marriage the main and biggest concerns are being neglected and all these bills has a very dark side to it. Remember people of the Bahamas (all nationality) what your going to vote for is what your going to get and when you do get what you ask for don't complain. ........dont be surprise that some day your children would hold the last name and nationality of your baby mother gf last name or your baby daddy bf last name.

Comrade SP, the only bashing category you left off your intolerance and homophobia list, is a gay terrorist?

LMAO...You people are too damn crazy!!!