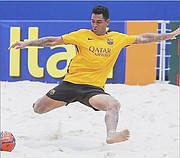 Heimanu 'Manu' Taiarui, the No. 1 beach soccer player in the world, in action.

HEIMANU “Manu” Taiarui, the No. 1 beach soccer player in the world, led the Tahiti national team to victory over Italy in a penalty shootout at the 2015 FIFA Beach Soccer World Cup.

Now a coach for the Bahamas men’s national beach soccer team, Taiarui is preparing the Bahamas for the FIFA 2017 Beach Soccer World Cup which will take over the Bahamas Football Association’s (BFA) Beach Soccer and Futsal Facility at the foot of the Sir Sidney Poitier Bridge in New Providence on April 27 next year.

Ask Tahitian beach soccer superstar Heimanu “Manu” Taiarui when he first started playing soccer, and the answer might surprise you: “When I was born.”

And he’s probably not exaggerating - by much. After all, growing up in a family of grass soccer players, he really had no choice.

But it wasn’t until a friend introduced him to beach soccer more than half a decade ago that his own career started to take shape.

In fact, before 2010, Taiarui was just another guy on the beach who enjoyed playing pick-up soccer matches with his cohorts.

Today, the current FIFA Beach Soccer Player of the Year, who is now a coach for the Bahamas men’s national beach soccer team, can’t walk down the streets of his homeland without being stopped by fans.

In the span of just five years, the world renowned defender has gone from being a recreational player to the No. 1 player in the world - the shortest amount of time it’s taken any player to leapfrog into that position.

Born on the beaches of Rio de Janeiro, Brazil, beach soccer has long been played informally on sandy shorelines around the world.

Despite its South American roots, the game was codified in 1992 by a group in Los Angeles, California, and one year later the first professional beach soccer competition was held on Miami Beach with the USA hosting Brazil, Argentina and Italy.

Taiarui’s professional career officially began in 2011 when he participated in his first workup in Italy under the tutelage of famed beach soccer pioneer and coach Angelo Schirinzi. Two years later, Taiarui led the Tahitian national team into the annals of history when they became the first Pacific nation to qualify for the knockout stages of an international FIFA tournament at the 2013 FIFA Beach Soccer World Cup. Another two years later saw the team once again smashing records when Tahiti beat Italy in a penalty shootout at the 2015 FIFA Beach Soccer World Cup to become the first Pacific nation to ever make it to a final in a FIFA tournament.

“We went from 0 to being in the final of the last World Cup,” Taiarui said. “Everything is possible.”

Even winning here in the Bahamas—a goal that, as a coach, Taiarui is working tirelessly toward as the Bahamas prepares to host the FIFA 2017 Beach Soccer World Cup at the Bahamas Football Association’s (BFA) Beach Soccer and Futsal Facility at the foot of the Sir Sidney Poitier Bridge in New Providence, Nassau. The event will mark the first time that a Caribbean nation will host a senior FIFA event.

“It was a good opportunity to come here and help the team. I want to help these guys learn what I’ve learned,” Taiarui said, adding that beach soccer is tougher than ever. “In general, teams around the world are getting stronger, particularly the European teams. It’s getting very, very difficult—there’s lots of competition.”

The Bahamas got it first taste of what’s in store for them in 2017 earlier this month when they played a friendly match against No. 6-ranked Switzerland in Nassau as part of the Kalik Light Cup. The team finished 13-3 on Friday, stepping it up to finish 9-6 on Saturday. Since then, Taiarui is intent on addressing the team’s biggest weaknesses, namely focus and drive.

“I want to make the [Bahamas] team stronger,” Taiarui said. “They need to train hard, be disciplined and professional. Dedication has to go into it. I want them to show their best—how good they are—and to be the best. [Tahiti] did it, and it can be done here.”

Between a more strenuous practice schedule and tightening the reins on the team, Taiarui hopes that the Bahamas can make it to the second round of the 2017 World Cup next April. To further prepare, the team will fly to Europe this summer to participate in friendlies against Switzerland, Germany, France and, potentially, Spain.

“That’s how we prepared for World Cup in 2013,” Taiarui said, referring to the Tahitian national team. “You don’t stop playing beach soccer for two months so you get more experience. It will be good for this team. I want to give them confidence leading up to the World Cup and have time to see what’s happening in Europe. Right now they just play against each other, they know all the moves. [In Europe] It will be very, very different.”

After all, Taiarui added, the Bahamas does have the upper hand over its European counterparts when it comes to one thing: Sand, and lots of it.

“Beach soccer in the Bahamas costs nothing to play. You go to the beach with a ball,” he said, pointing out that landlocked countries like Germany and Switzerland spend a lot of money just to get to the seashore. “There’s no excuse.”

He is just passionate about the game and he should channel his passion into training young players. Since he is a coach now, he should consider incorporating new concepts in their training regime. Indoor training could be great for his players and for that he should approach http://socrlabs.com/">Socrlabs - Indoor Soccer Training, Mundelein.