Suspect In Murder Case Is Remanded To Prison 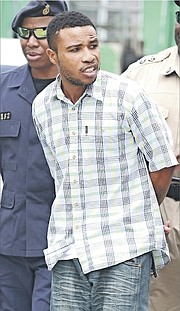 A MAN was remanded to prison yesterday after he was arraigned on charges of murder and armed robbery.

Charlton Williamson, 24, appeared before Magistrate Constance Delancy accused of intentionally causing the death of Paul Butler, whom he allegedly robbed of an undetermined amount of cash on April 6.

Williamson was charged with murder under Section 291 (1B) of the Penal Code, Chapter 84 concerning Butler’s death.

A charge under this section does not attract the discretionary death penalty a Supreme Court judge is given by law, if a jury finds the pair guilty of murder.

The single charge of armed robbery also carries up to life imprisonment if convicted.

On the night in question, police were summoned to the scene of an apparent homicide in the Yellow Elder Gardens community where the victim was the proprietor of a convenience store on Melvern Road.

According to reports, a lone gunman came into the store, approached the proprietor and demanded cash. The gunman shot him, took some cash and fled on foot.

Williamson was informed yesterday that he would not be required to enter a plea to the allegations until he is formally arraigned in the Supreme Court before a judge due to the nature of the offences.

Williams is expected to return to Magistrate’s Court on September 28 where prosecutors will present him with a Voluntary Bill of Indictment facilitating the transfer of the case to the Supreme Court.

Magistrate Delancy told Williamson that she did not have the jurisdiction to grant or consider bail because he was charged with murder and armed robbery.

He was remanded to the Bahamas Department of Correctional Services until he is tried in the Supreme Court or granted bail by the higher court, for which he has a legal right to apply.

The accused has retained attorney Tai Pinder to defend him.