Pair Jailed For 18 Years For Roles In Triple Killing 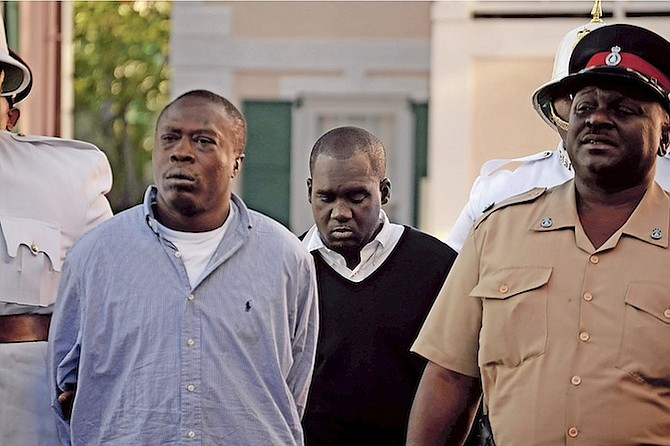 TWO men were sentenced to 18 years in prison yesterday for their roles in the fatal shooting that claimed three lives, including a pregnant woman due to give birth to her son, five years ago.

Shawn Knowles, 43, and Timothy Saunders, 36, reappeared in the Supreme Court yesterday before Senior Justice Stephen Isaacs for the completion of the trial on July 30, 2011, into the deaths of Edward Braynen, Chackara Rahming and Erica Ward.

Probation reports, which had been requested by the court for consideration, were exhibited at a prior hearing on July 26 and evidence was given on the findings by probation officers from the Department of Rehabilitative Welfare Services.

Senior Justice Isaacs yesterday said: “As the jury convicted on the strength of the statements taken from Knowles and Saunders, which did not indicate different levels of culpability, I am unable to impose different sentences as suggested by counsel for Saunders.”

The judge proceeded to sentence Knowles to 18 years in jail for each of the three counts of manslaughter to run concurrently and three years for each count of possession of an unlicensed firearm and possession of ammunition to run concurrently. Knowles’ 18 year sentence was reduced to 17 after receiving credit for time spent on remand awaiting trial.

Saunders was also sentenced to 18 years in jail for the killings and his sentenced reduced to 14 for his four years spent on remand prior to trial.

“The date of commencement of the sentences is February 23, 2016, the date of conviction” the judge ruled.

The Crown alleged that the killings were in retaliation for the July 12, 2011, murders of Kevin Forbes and Alwayne Leslie at a Haitian village off Montgomery Avenue.

Ward was pregnant with the child of Serrano Adderley, the 30-year-old man charged with the deaths of Forbes and Leslie. Knowles is the nephew of Forbes.

The victims were asleep in a one-bedroom apartment when an intruder, who the prosecution alleged to be Knowles, forced his way inside by blasting the locks with a shotgun. Once inside, he shot the woman in the head and Braynen in the back using a shotgun. Saunders was outside as the shooting occurred.

Four young children inside the apartment were found unharmed by police.

Knowles’ lawyer, Romona Farquharson-Seymour, said there was no evidence – fingerprint, footprint impression or DNA – linking Knowles to the scene of the killings.

Though the jury’s 8-4 guilty verdict for three counts of murder were not acceptable in law, they found Knowles and Saunders guilty of manslaughter by provocation on the same count.

“The latitude which is afforded the court on sentencing for manslaughter is wide” the judge said yesterday.

“I am obliged to underline the circumstances of the offence as presented by the Crown. Even though 25 witnesses were called for the prosecution, the entire case turned on two statements, the first given by Saunders that he stood outside the apartment while Knowles went inside to shoot the occupants. Saunders strenuously denied that the statement was made voluntarily. A second statement given by Knowles indicated that two men whom he named, brought two guns which he hid in bushes near his house the day after the incident. He too strenuously denied that the statement was made voluntarily.”

Justice Isaacs said: “These statements were put before the jury. The jury rejected medical evidence that both Knowles and Saunders presented with bruises and traces of blood in their urine and accepted these statements as being made voluntarily. The jury also rejected two alibi witnesses for Knowles – his aunt with whom he lived and a stranger who was at his aunt’s gate – both of whom said that the police took him from inside the house and not in the street as they stated, after he did the firearms and ammunition and was crossing the street to return home.”

“The jury also rejected evidence of two alibi witnesses for Saunders, both of whom placed him at the Haitian dance at the material time.”

“Given the evidence presented, eight jurors were left with no reasonable doubt and were sure Knowles and Saunders committed the offences of manslaughter and that Knowles committed the firearm offences.

He said: “I have cited the evidence above merely as part of the overall circumstances of the offences, as there is no eye witness and no forensic evidence connecting either defendants to the scene of the deaths or to the firearms and ammunition and police witnesses who described the arrested of Knowles for the firearm offences have been impugned by Knowles’ alibi witnesses.”

Senior Justice Isaacs said that the mitigating factors for Knowles were that he was provoked by the killings of his uncle and the attempt to kill him by the lover of one of the deceased. He also noted that Knowles did not breach any of the prison rules and was described as mannerly and cool, even though he had a rough upbringing.

As for Saunders, the judge said, from the evidence accepted in the form of his statement, he was present at the scene but did not shoot anyone according to his statement. He did not breach any prison rules and was described as quiet and mannerly.

“The aggravating factors for both Knowles and Saunders are the seriousness of the offence which resulted in the deaths of three persons, one of whom was pregnant.”

“The injuries were shotgun blasts to the head of both women, and the back of the arm of the man. Knowles has a conviction for manslaughter for which he was sentenced to 10 years in 2003 (while) Saunders has convictions for minor offences in 2001 and 2003.”

Knowles and Saunders can appeal the convictions and sentences to the Court of Appeal.

Cordell Frazier, who prosecuted the case for the Crown, can appeal the sentences imposed by the court.

18 years? three adults murdered along with an unborn child, because of retaliation and only 18 years? 14 in one case. A slap on the wrist.

that's not even 18 years... and why are we still sentencing concurrently? WTF, CONSECUTIVE SENTENCING! If you get 35 years in total charges you should serve ALL of them, especially for THREE capital offenses FFS.