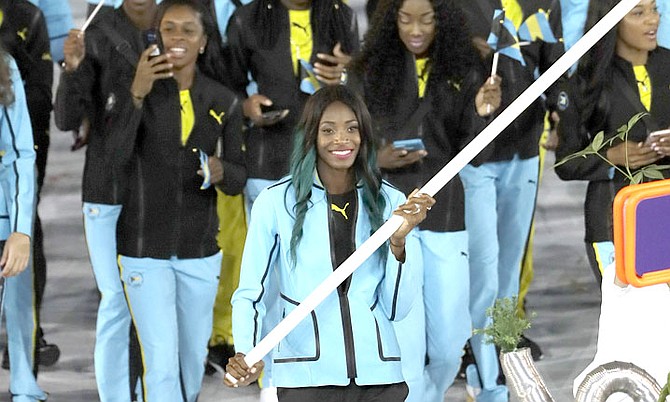 RIO de Janeiro, Brazil: With a strong message of promoting peace around the world, the first Olympic Games to be held in South America officially got underway on Friday night with a fantastic display of artistry during each performance.

It was one of the most spectacular ceremonies ever held.

The highlight of the night, however, was the colourful parade of athletes into the Maracana Stadium, adorned in their traditional outfits from more than 200 countries participating in the two week sporting extravaganza.

Never before have the athletes made their entrance the way they did as they received a seed and a cartridge with soil to plant a native tree of Brazil – the country with the highest diversity of trees on the planet.

Each of the 1,100 athletes inserted their cartridges in the mirror towers spread across the stage. They presented more than 207 species, which will form the Athletes' Forest in the Radical Park in Deodoro, a legacy to the city of Rio de Janeiro.

Leading the Bahamas into the stadium behind a female on a bicycle decorated with plants was quarter-miler Shaunae Miller, who will be contesting the women's 400m when the athletic competition gets underway next Friday.

Wearing a combination of the aquamarine gold and black, shirts and pants, Team Bahamas was followed by a small group beating some drums.

They emerged after Azerbaijan and ahead of Bangladesh.

On Saturday, the Bahamas BTC Team will get their first taste of action as Emily Morley makes her international debut in the Women's Single Sculls in rowing at the Lagoa Stadium.

Morley, a 22-year-old student from Ithaca College in Ithaca, New York, will be in lane six in race seven at 7:30 am EST. Morley, nicked name 'Em', is the only Bahamian competing in a non-traditional sport at the games.

The venue has been the host of several local, national and international rowing events since the late 1950s, including the Rio 2007 Pan American Games and the 2015 World Rowing Junior Championship.

Also on Saturday, Dustin Tynes will break the ice in the brand new Olympic Aquatics Stadium when he sets the pace for the three-man team as he competes in the men's 100m breaststroke.

The stadium, built just in time for the Rio Olympics, was opened in April when the Maria Lenk Open Championships was held. It has a seating capacity of 15,445.

Tynes, a 20-year-old student of Ohio State University, will be entered in lane eight in the second of eight heats in his speciality at around 1.04 pm EST. He will need to finish in the top 16 in order to return for a second swim in either the consolation final or the A final where the top eight will compete for the three medals.

"I'm very excited to be here and to feel the energy that's at the pool and the village," Tynes told The Tribune. "It's exciting seeing the accomplished athletes like Arianna Vanderpool-Wallace and Leevan Sands and seeing how they move and look to be as if the were right at home because of the amount of times they have been at an Olympic Games Village.

"For the 100 breaststroke, I'm expecting to just put together a good race, get a best time and get as close to the semifinals as I possibly can."

Tynes, making his Olympic debut as well after representing the Bahamas at the Commonwealth Games in 2014 and the Pan American Games last year, has a best time of one minute and 1.58 seconds.

Following Morley and Tynes will be Joanna Evans, whose first of three events will take place on Sunday. She's going to be featured in the women's 400m freestyle at the swim complex.

'Jo", as she's affectionately named, is coming off her freshman year at the University of Texas. While this is also her first Olympics, she's competed at the World Championships, Pan Am and the Commonwealth Games with Tynes and Arianna Vanderpool-Wallace, the other members of the team.

Evans, 18, will swim out of the first of four heats of the eight lap race in the 50m pool in lane three. Her best time of 4:12.47 is also the national record. She will have to be in the top 16 in order to come back for a second swim.

On Monday, the Grand Bahama native will swim in the women's 200m freestyle, starting at 8:27am. She will be in lane two in the second of six preliminary races in order to advance.

Then, on Thursday, Evans will return for the heats of the women's 800m freestyle where she will swim out of lane four in the first of four heats.

Vanderpool-Wallace, the veteran of the team, was scheduled to make her initial appearance at the games on Saturday as well, but she's not entered in the women's 100m butterfly, the first of her three events she's qualified to compete in.

Instead, she won't compete until Wednesday when she swims out of lane seven in the fifth of six heats of the women's 100m freestyle that starts at 8:17am EST.

Again, the top 16 will move on to the semifinal and final.

Vanderpool-Wallace will come back on Friday for the heats of the women's 50m freestyle.

Men’s Team First Round, 8am.

Men’s and/or Women’s Prelims, 9am

Round, Second Round and