No Breakdown Of Exam Results 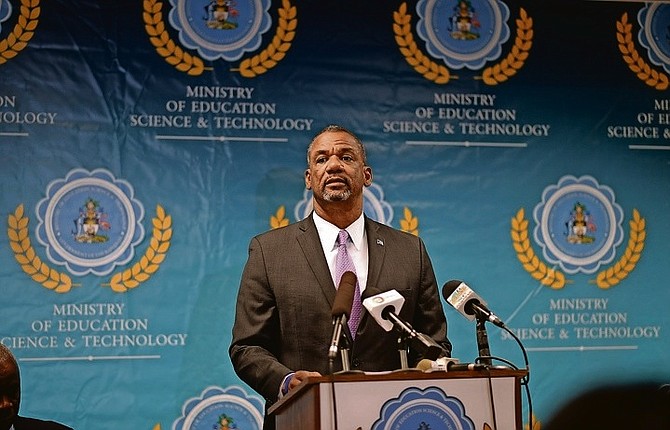 No breakdown of exam results

IN the absence of an official Bahamas General Certificate of Secondary Education (BGCSE) examination letter grade breakdown, Education Minister Jerome Fitzgerald’s high praise of an across the board improvement in eight test subjects, including mathematics and English, have raised questions over how well students fared in individual subjects this year.

Instead, this year, only a general overview and percentages calculated per letter grade were released to the media.

Regarding the number of students who sat the tests, there were 6,450 or a 1.13 per cent decrease compared to the 6,524 test takers in 2015. The decrease is attributed to more students taking the exams earlier than the ministry requires, Mr Fitzgerald said.

Overall, the minister said he was “proud” and “pleased” with the marginal improvements seen in this year’s exam grades.

In 2016, there was a marginal increase in performance after a total of 574 candidates received at least a C or better in mathematics, English, and science. This represented a small increase of 0.70 per cent when compared to 2015’s figure of 570.

Mr Fitzgerald said marked improvements in these subjects would not be seen for several years as he defended the government as having “done all it can” to assist students in excelling in the national examinations.

“What I can say is that the averages have not changed that much and I have said before that you will not see a change in averages for a number of years,” the minister said while responding to a question from The Tribune.

“As I said, the challenges are deep rooted. They are challenges that we have been battling with for some time and until we as a country and in particular parents take responsibility for the education of their children and ensuring that they at least come to the afternoon classes we are providing free of charge so that they can have improvement, and we can show from statistics that those students who were responsible enough or parents who were responsible enough to make sure the children came to those classes, the statistics show that they had tremendous success in the BJC results and that is a reflection of what you saw. You will not see improvement to any great extent until we get to that point.

“The teachers are doing all they can and the ministry is doing everything they can. The government is providing resources like no other government has ever provided before to ensure that the students are given every opportunity are improved.”

A further breakdown by the ministry showed 903 students received at least a C in five or more subjects in 2016 compared to 961 students in 2015. This represents a 6.04 per cent decrease.

In comparison, the BJC results appeared to out perform the 2016 BGCSE results, with officials recording the best BJC grades in 20 years. They attributed this improvement to the new criteria put in place through the National High School Diploma.

This year’s results have seen an increase in the number of BJC candidates.

Candidates totalling 11,703 from a total of 120 centres registered to do the BJC exams for the 11 subjects offered.

The candidates came from 68 independent or private schools and 52 government schools.

Mr Fitzgerald said while officials note the improvements, the government still has a long way to go to raise the standard of education in the Bahamas.

Does anyone care what this guy says?

get past exams for every five years and have a math teacher show how thw questions have become easier and easier just to maintain the d average.

then get a whistleblower to reveal how many scripts in different subjects receive U grade, or no grade. If you look at it that way the D average folks are smart.

most of the BGCSE teams heads have recently quit and there is a new batch of persons there. But what you are saying is true, they have systemically made the exams less difficult (math at least). No-one who writes or marks is gonna blow a whistle under those non-disclosure agreements. unless some legislation gives them the freedom to do so, although i highly doubt it would stop political victimization

past exams are in the public domain. just get someone who is not bound by non disclosure and cannot be victimised.

What he should admit is that all of these failing students are still smarter than most of the politicians in the not so honorable house of assembly.

How come Bahamian nanny always floats to the top?

What's with this average grade? There is no such thing, mathematically. The mid point (average) between A, B, C, D, E, F, G, will always be " D ", because, contrary to popular belief, the average of any two values is the "middle" between those two values or constituents. For an example, choose the values 100 and 70. The average is 85, which is the midpoint between 100 and 75. What the ministry of education, etc., must do is to report the average in %-age if a improvement is to be quantified.

There are three types of averages: Mean, Median and Modal. The numbers are different for each type of average.

Using the above figures for the BGCSE, the median average was D as 11,789 results were D or below. There were 23790 results listed and the exact middle of that is 11,895.

The modal average of the BGCSE was C with 7,047 results.

The mean average per student is not being given. It is the embarassing part for Jerome and indictment of his tenure as cabinet minister. One can assume that if they are hiding it, it is bad.

Buddy if you have "done all you can" for the youth of the Bahamas then i suggest you get the Phuck out of office. How can this man stay in power saying crap like this? OH wait yes the PLP has never put anything into education because keeping control of the masses is easier when the masses are uneducated..... thanks again for nothing PLP

The factory for breeding stupid PLP voters is still cranking out their prize pupils -- just in time for the latest batch of D graduates to vote in 2017.

When will Bahamians realise that education is going to be the difference between success and failure? Imagine if there were no longer Bahamian employment protection and these high school geniuses would have to compete with people from other education nations for jobs. We cannot compete on the world stage, much less at home without the protectionism. How does this motivate us or give us pride?

We need Darwin more than ever these days.

I just wish that both teachers and student could speak proper English, instead of "we een gat nuttin'".