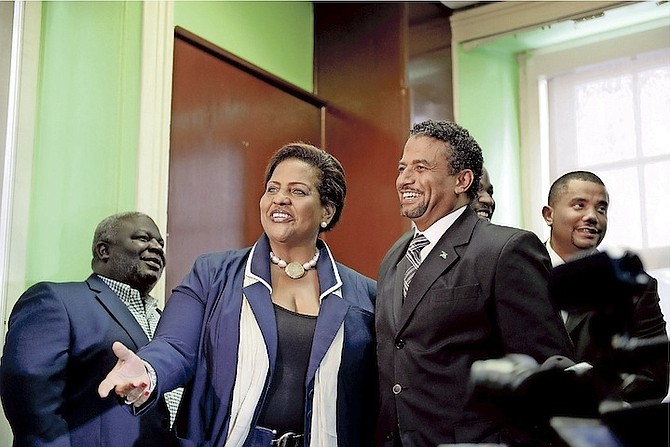 Do you think the events in the FNM over the past week will benefit the PLP in the general election?

SIGNALLING his return to Parliament after losing his seat in the 2012 general election, Democratic National Alliance Leader Branville McCartney yesterday accepted his nomination as leader of opposition business in the Senate.

Flanked by DNA executives and her fellow FNM MPs at a press conference in the House of Assembly’s Minority Room, Mrs Butler-Turner maintained that she and her colleagues will not be joining the third party, but stopped short of revealing how the resulting collaboration will influence the election campaigns of either party.

She said: “The significance is that we were able to even get this collaboration, that is the most significant thing. The second significant thing is that we respect the differences we bring to the table, but more importantly we understand the commonality that we share and all of our people, our supporters share, and that is people have been begging and asking us to please either come together

formally or to work together to pool your resources to rid yourself of the PLP government.”

“We have a work in progress,” Mrs Butler-Turner told reporters when asked for more details, “we have told you we have a plan, and we are moving now in building out that plan. The only thing that stops us now from rolling out the rest of our senators is the fact that we understand from the prime minister that there has to be clarification as to whether we will be able to use three senators or whether we will be able to appoint four senators.”

“So in that regard that is what we’re concentrated on, I ask you to stay tuned because essentially what is going to happen is going to be so dynamic and you’re going to be able to see that we’re able to do something totally different from what you look at in terms of just party politics in the Bahamas.”

Mrs Butler-Turner added: “Party politics has not served us well at this juncture, we have become very tribalistic and what we’re showing is that we’re able to move away those tribal barriers to work together for the common good and that is to prevail.”

The FNM has initiated disciplinary proceedings with the view of expelling those “rebel” MPs, all of whom have stated their refusal to quit the party.

Although the MPs are still members of the FNM, Mrs Butler-Turner yesterday revealed that she was awaiting legal clarification from Parliament on a request made by the remaining three FNM MPs to appoint a senator. Sources close to the matter have confirmed that Dr Minnis intends to issue a formal request to House Speaker Dr Kendal Major.

Mrs Butler-Turner said: “We had to put everything on hold after the prime minister indicated that he’s gotten information that the three FNM MPs might be asking for a senator, that is the hold up right now, and if you look at it they have a tenth (in the House) and so they may want to be able to do that. It’s a real split in there.”

Yesterday, Mr McCartney congratulated Mrs Butler-Turner on her historic appointment as Official Opposition leader in Parliament, and remarked on the historical significance of his own appointment given his leadership of another political party.

Pressed for details on how the collaboration will take shape, Mr McCartney said: “My answer is this, at the end of the day we must come together as Bahamians who want what is good for the country to rid ourselves of the PLP and that is what has happened here.

“We must rid ourselves of this inept, ineffective, nontransparent, unaccountable government - period. This should be something that is welcomed in order to change this country. We have absolutely planned beyond and they will come out in due course.”

For her part, Mrs Butler-Turner underscored that one the most salient political questions following the 2012 general election has been the impact of the third party on the FNM’s defeat.

Highlighting that the DNA had captured some eight per cent of the electorate, the Long Island MP said that many voters were uncertain whether the FNM has the political maturity and support to form a coalition capable of ousting an “incompetent and inept” PLP government at the polls in 2017.

“Today it is a distinct honour, it’s also very historic to show you exactly what it takes when you’re able to work across borders to achieve a common good for the Bahamian people.

“We are very delighted to be able as Her Majesty’s Royal Opposition to welcome the forces and the strength and to name today as opposition business leader in the Senate Mr Branville McCartney.

“He is a colleague that I have worked with very closely in the Cabinet of the Bahamas. He has parliamentary experience, he has leadership experience, he has the ability to ask the tough questions, and we will be collaborating on every piece of legislation as we move forward to ensure that we are able to keep not only the PLP’s feet to the fire but to make them transparent and accountable to the Bahamian people.”

The concept of a coalition between the FNM and DNA has been publicly considered by both parties for much of this year, and this recent move appears to be a turnaround on statements made by Mrs Butler-Turner earlier this year.

Following reports that party leaders Mr McCartney and Dr Minnis were both open to talks in May, the Long Island MP told The Tribune that such a coalition was “not a good idea” given the third party’s fledgling status.

At the time, she suggested that the way forward was a merger of the two parties and the disbanding of the DNA, whose only appeal she said was the “Branville McCartney brand”.

In that interview, she said the DNA was not strong enough to sit at the table with the FNM because they held no seats in the House of Assembly.

Noting the staunch desire to unseat the PLP, The Tribune questioned her yesterday about how the collaboration would work if the FNM obtained the majority of seats at the polls in 2017 with Dr Minnis at the helm.

“To be very honest with you that is a huge hypothesis,” Mrs Butler-Turner said, “and I will remind you once again that we don’t operate in hypothesis, right now we are operating in the now.

“We are operating in the what is needed, what is the medicine that is needed for us to get past an election where we are able to eliminate the PLP. The same way we’re able to work together here, we know that we have no barriers to working together for that common good.

“So whatever the outcome is,” she continued, “and we believe the outcome will be, once we stick together, we in this collaboration will be the ones that will prevail. But should there be another outcome we believe that at the end of the day that we must work together to ensure the Bahamas is the one that wins, not the egos of any of us as individuals.”

DNA Chairman Andrew Wilson also sought to dispel rumours that the appointment was predicated on the disbanding the third party, or a change in leadership, in a statement posted on the party’s Facebook page.

Touting that the party’s emblem, a lighthouse, stood tall in the midst of “national confusion,” Mr Wilson maintained that Mr McCartney’s new official title did not change his advocacy or the party’s platform.

Mr Wilson said the party has demonstrated the will to disrupt the status quo of political mediocrity, and as such, the appointment demonstrated that the DNA would once again “step up to the plate.”

Hahahahah Tal - I forgot about that pic of Comrade Cassius! You cause me crack up at work!

So what Leadership skills does LBT have that Minnis doesn't?

Wow! All it took was a Senate seat to get Bran to turn over the DNA to LBT thereby abandoning and betraying all longtime supporters of that political party. Next will come a most interesting re-shuffling of the DNA's leadership apparatus along with changes to its slate of candidates for the next general election. It seems Bran was always about Bran and Bran alone as many of us suspected, explaining why his party was never able to secure a seat in the HOA. The implosion of the FNM now seems to have led to the implosion of the DNA, leaving only the PLP standing. Crooked Christie's enrichment of the Dimwitted Doc's pocketbook has bought Christie much more than he (or his Red China friends) could have ever expected or dreamed. Yes, it certainly looks like Red China has decided and made it possible (by dishing out the cash) for Crooked Christie to have another five-year term. And to think the Obama-led U.S. government is worried about the Russians having interfered with the recent U.S. elections! What a joke!!

Rumours are running rampant that Bran has promised LBT she can run under the DNA banner in the Montagu constituency if she senses Long Islanders will not give her the support she believes she deserves and that this apparent fact has greatly offended and incensed the constantly yapping little white-haired poodle who has very foolishly and prematurely proclaimed his undying loyalty to the Dimwitted Doc Minnis.

Who running that "join-up". . .Bran all over the place like he is the one in charge. . . LBT sound that she done conceded. . .rambling all over the landscape. . .now promising an earth shaking decision when she appoints the next senator! I AM TRAINED TO ASSES AND ANLYSIS BEHAVIOUR AND I TELL YOU SHE IS "PUSHED" OUT ON A LIMB BY HERSELF. She will not be able to join the DNA. . .Bran and his #2 will not step down for her. . .and she will not stay in the back with them two leading. . .she is damaged goods. Now watch the FNM offer all the members of the seven except Keys and LBT. . . the cancer will be removed that may upset the next government if the FNM wins! Now I will venture to say that the shocking information will be Papa. . .Brent S. . . or Luby Georges! Lol!