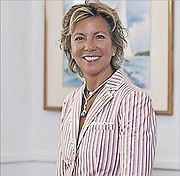 DESPITE some $27.5m in power restoration costs post Hurricane Matthew, Grand Bahama Port Authority Vice-Chairman Sarah St George announced that there will be no rate increase to consumers in Grand Bahama.

An application outlining a five-year plan to offset storm restoration costs through prudent cost management and fuel purchase was submitted by the Grand Bahama Power Company (GBPC) to the regulators, the GBPA Ltd.

“As promised in our briefing of November 16, there will be no increase to customers’ rates for the next five years when compared with 2016. In addition, GBPC has also agreed to delay the previously approved Hurricane Self Insurance Fund until Hurricane Matthew costs are fully recouped. We wanted to announce this as soon as possible to reassure everyone of rate stability as we move towards the eve of 2017.”

Ms St George stated that during a meeting with GBPC executives Sarah MacDonald, director; Archie Collins, president and CEO; and Tony Lopez, CFO, she said that it was strongly expressed that hurricane restoration costs should not result in an increase in energy billing to customers.

Describing the hurricane as a “traumatic event” for Grand Bahama, she commended the power company for its handling of the power restoration on the island.

“The physical restoration was phenomenal in scope and pace, and it is a win-win situation for the island to go forward with no increase in rates over the next five years, and with an even better storm-proofed T&D system. As regulator, we understand the cost issues faced by the power company and the price issues faced by consumers without losing sight of the intrinsic value of a high quality electricity service. We are extremely pleased with this outcome, which is to everyone’s benefit and affords us a brighter future,” said Ms St George.

The GBPC recovery operation was completed in record time of six weeks, less than the estimated 60 weeks (15 months) without additional manpower.

Ms St George noted that the adverse economic impact resulting from a slow restoration - with its extended hardship and inevitable loss of business, tourism, trade and jobs - would have implied costs many times higher for the Grand Bahama community as a whole and possibly proved irremediable, according to studies undertaken.

Technical experts consisting of 200 additional linemen plus local linemen worked over 95,000 hours. Other workers and 130 additional pieces of mobile equipment were brought in.

“The restoration criteria were principally: to complete the unprecedented restoration safely; to execute the restoration in a manner which inspired confidence by the regulator, the government of The Bahamas, the residents of Grand Bahama, existing licensees, businesses and potential investors; and to restore electricity supply responsibly in a timeframe which would minimise the adverse economic impact of a protracted island-wide power outage. Top priority went to energising the city water supply system to provide running water and emergency services. In addition, high priority was given to restoring services for as many customers as possible in the shortest timeframe, continuity of industrial sector operations and restoring tourism-related assets,” she explained.

“GBPA’s technical electricity regulation expert consultant from the US spent last week in meetings with GBPC’s financial team in Freeport,” she added, assuring that hurricane-related expenditure was examined in detail.

“We are fully satisfied that the relevant costs were properly and prudently incurred. Accordingly, these uninsurable costs have been approved by the GBPA and will be recovered over a five-year period commencing January 1, 2017,” she said.