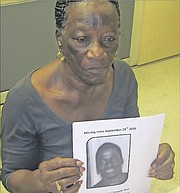 THOMASENA Moss, whose mentally ill son who went missing in the lead-up to Hurricane Matthew.

THOMASENA Moss, whose mentally ill son went missing in the lead-up to Hurricane Matthew, said the worry and confusion spurred by his disappearance two and half months ago has only intensified as the family prepares for Christmas without any leads on his whereabouts.

Mrs Moss, who is widowed, said the pain has now become unbearable as the lack of answers has left her family a “lost bunch in search of any and all possibilities”.

Kenneth Moss, 52, vanished from the South Beach community some time on or after September 29. According to his mother, the quiet and passive former police officer gave notice to family members that he was going for a walk around the neighbourhood as they prepared for the impending arrival of Hurricane Matthew.

“There was nothing different about him that day. He looked like he would normally look and I never suspected that would have been the last time we saw him,” a clearly concerned Mrs Moss told The Tribune.

Holding back tears she added: “Kenneth said he was headed up the street. It has been three months and I have waited every day for his return.”

Mr Moss suffered a series of mental breakdowns in the mid-1980s after taking cocaine, his mother said. His problems led to his dismissal from the police force and left him a ward of his mother.

“As a family we did all we could to shield him and keep him safe. He would hang out around the neighbourhood doing odd jobs for the neighbours. When he wasn’t occupied with that, he would head over to the South Beach Police Station; officers there would allow him to help around the yard and garage because they knew him from the area.

“I worried throughout the storm when he didn’t come back. As soon as we could head out, my other son, a defence force officer, took a group of his friends out and they checked all over South Beach for Kenneth.”

Mrs Moss said they had scoured the area: “Marshall Road, done. Pinewood, done. All the way west, done, as far east as possible, done, called family and friends all over this country, nothing. We tried it all and still nothing. (We went to the) morgue, several trips, hospital, Sandilands, police stations - everywhere we could look, we checked twice,” she said.

“It’s as if Kenneth vanished into thin air,” she said, staring at one of her son’s photos. “Maybe the wind blew him into bushes. Maybe something else happened. The worst thing is the guessing because all I can do is suspect the worst and that hurts me more than anything else.”

In early October, a missing person’s bulletin was distributed across the country and social media for Mr Moss. He is described as being six foot and of medium build.

Anyone with information of Mr Moss’ whereabouts is asked to call police at 911/919, the Central Detective Unit at 502-9991 or the nearest police station.