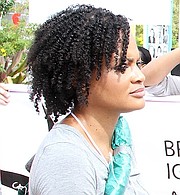 ACTIVIST Ternielle Burrows yesterday questioned why Official Opposition Leader Loretta Butler-Turner, who campaigned for women’s rights, would appoint two men to the Senate who “are opposed to everything she believes in”.

In an interview with The Tribune, the independent candidate for Elizabeth said she did not understand why Democratic National Alliance (DNA) Leader Branville McCartney and controversial radio talk show host Rodney Moncur were chosen to be senators when both men have actively campaigned against women’s rights.

Mrs Butler Turner was an advocate for the vote ‘yes’ campaign ahead of the gender equality referendum. In 2009, when she was minister of state for social development in the Ingraham administration, she tabled a bill that would have made marital rape a crime. That bill was shelved after pushback from the community. Mr Moncur and Mr McCartney did not support the legislation.

Mr Moncur called for all Bahamians to vote “no” in the June referendum in order to “save women” from themselves and to “stop foreign men from having the same rights as Bahamian men.” He called the process “witchcraft”.

Meanwhile, Mr McCartney also voted “no” to the all four of the referendum questions.

Both men received their letters of appointment to the Senate yesterday.

“I am concerned with the appointments, not just Senator Moncur but also Senator McCartney,” Ms Burrows said. “Both men held a standpoint that seemed to oppose Mrs Butler-Turner. That is where I am confused. Has her position changed or what progress did she have in mind when choosing the people she did when she understands their stances related to gender equality and marital rape? While Mr Moncur is more outlandish and Mr McCartney is more easy on the eyes and palatable, I do not disassociate them. I cannot separate the two or say one appointment is less valid than the other.”

Ms Burrows questioned whether the move was “an act to shut the Free National Movement (FNM) down.”

Mrs Butler-Turner was appointed Official Opposition leader after she and six other FNM MPs wrote a letter of no confidence in party Leader Dr Hubert Minnis to the governor general, asking for his removal. Dr Minnis remains leader of the FNM.

In a statement while announcing the Senate appointments, Mrs Butler Turner said: “The choices for the Senate reflect a recognition of the need to collaborate, find common ground, and in particular, give voice to the difficulties and hardships experienced by every part of society, especially the most vulnerable individuals and groups in our country.

“There is strength in diversity, and it is a testament to their love of country that these Senate appointees agreed to collaborate in the interest of a common goal, namely rescuing the Bahamas from the quagmire of corruption and incompetence of the PLP.”

Ms. Burrows has every right to be concerned. Sadly, LBT does not appear to be playing with a full deck.

Because it would not be right to put a lesbian in the Senate! next question Burrows!

Her concerns I think are appropriate. But Rodney represents a large constituency of Bahamians... I would consider them the majority. History has shown Rodney to be on the correct side of the Bahamian psyche on every single issue. Minus his asinine views on prostate cancer and breast cancer.

If you think, like I do, that Moncur is archaic in his views and positions on some issues, then take a look around you because the whole country is bloody like that. THAT is why I believe LBT appointed him, he is the embodiment of the majority in this place. You think Moncur is clueless in the Senate? Ask the average Bahamian how many seats are in the Senate and how often we 'elect' the senate. You'll be in awe.

You sir are truly the product of a D - education fed to you by our very dysfunctional public education system.

Seeing that a D is the middle of our grading scale, i.e the median, I'm not sure what you are trying to say. And Alex_Charles is right, talk to the people in town; that is how they think. I may not think like that way nor you.. but most Bahamians? They actually think like him. You think Rodney Moncur on the radio talking to himself? If he didn't have listeners he wouldn't be on the airwaves.

I truly believe the Referendum was purposely voted "no" out of spite towards the PLP. They used it as a distraction against the real issues put towards them in question at the time by the people. Have the Referendum with a successful government in office, and I bet you it will be voted "yes".

Considering that this push has failed twice under two different administrations? Nah. If I were in government I wouldn't even begin to waste public funds on another one of these. The people have spoken and women have rejected any changes being made, twice. Leave it be. We had the same stance on Marital Rape in this town, women will never be equal in this country within my lifetime and that's the way the Bahamian people like it. No point in going against the will of the people.

Then your country is F-ed no matter what you do, the world realizes your living in the stone age just like Iran and every other Middle East country who treat their women like dogs. So your telling me that Bahamian women just like it the way it is, that they prefer to be looked down upon, and they like making less money than men, they can't think for themselves, than your country is not even worth living in; good luck with that stupid mentality. Six more days and I'll be living in beautiful Hawaii, the hell with the Bahamas than, my Bahamian friend in Hawaii was right, once in Hawaii, the Bahamas will be a forgotten nightmare.