Rollins: No Legal Basis For Disciplining The Rebel Seven 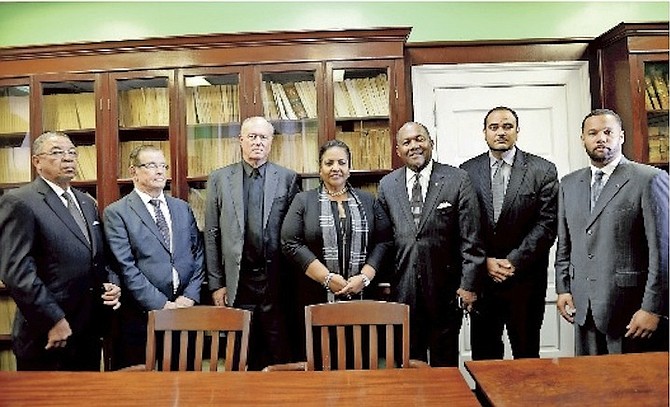 FORT Charlotte MP Dr Andre Rollins said last night that “there will be no disciplinary action” taken against the seven Free National Movement MPs who ousted party Leader Dr Hubert Minnis as leader of the Official Opposition, because there is no legal basis for such a move.

He added that a formal objection has been lodged against “the bogus charges” levelled against him and the six other members of Parliament who took part in the action of removing Dr Minnis from the post. Dr Rollins said a growing number of FNMs are admitting “that the best course of action for the party to take under the present circumstances is to solidify widespread support around a new leader.”

His remarks came in an e-mail in response to questions from The Tribune.

Dr Rollins echoed the sentiments of Long Island MP Loretta Butler-Turner and St Anne’s MP Hubert Chipman, who last week said the if the matter were to be taken to court, the FNM’s Executive Committee would not have a case because the group’s actions “were consistent with the constitutionally protected right of parliamentarians to recall a parliamentary leader when they no longer have confidence in his/her ability to lead.”

Dr Rollins said: “It would be selfish for party officers and supporters to sit back and watch the party hobble into the next general elections with a leader who has lost the confidence of the majority of his troops.

“It makes absolutely no sense to say that you will allow the party to self destruct and lose the next elections and then begin the process of putting it back together again in time for the 2022 elections under new leadership. The Bahamian people, even those who are sympathetic to Dr Minnis, would rather the FNM re-engineer itself now, as opposed to waiting for the 2022 election cycle.

“The electoral hopes of the FNM can be salvaged in time to win the next general election. However, it requires an acknowledgment that new leadership is needed to bring the FNM together in the short time that remains. Our country can’t wait until 2022 for the FNM to get its act together. It must deal with its leadership problem now. For the sake of our country, much more than our party, humility and compromise among the various stakeholders is needed urgently.”

Dr Rollins said under similar circumstances, if the majority of the Progressive Liberal Party parliamentarians had voted no confidence in Prime Minister Perry Christie, Dr Minnis would be among the first to call for the prime minister to resign.

“This is a concept that Dr Minnis has said on many occasions he supports – the right of constituents to recall a member of Parliament. Well, after more than four years of failing to effectively lead the opposition in Parliament, we used the provisions of the Constitution to recall him. It’s that simple,” Dr Rollins said.

“Surely Dr Minnis doesn’t believe that he is above being recalled. This is yet another example of the contradiction between Dr Minnis’ words and his actions. He has on numerous occasions called for Mr Christie and some of his Cabinet colleagues to resign after they lost the moral authority to lead. The only reason that Mr Christie has not called on Dr Minnis to resign as leader of the FNM is because the only chance that the PLP has of being re-elected is if Dr Minnis remains leader of the FNM.”

Last week, the FNM appointed a three-person tribunal to decide the fate of the seven MPs. The party accused the politicians of bringing the party into “disrepute, division, rancour and dishonour” through their actions.

All of the signatories have declared that they will not quit the party, despite calls from Dr Minnis for them to do so.

They now face expulsion, suspension or a fine.

Speaking as leadership or being in charge...Have anyone ever seen Rollin a lil efficient or active in his constituency....Or even being a leader knowing that he is or supposed to be Forth Charlotte's MP...It's very easy to throw rock at someone else home but when your home is made out of glass best thing to do is secure your own home before trying to destruct someone else's home.

Rollins changes alliances like the wind and as a result lacks credibility to speak on any issue.

I wonder how MP Rollins can "fix" his mouth to tell anybody about principles and good behavior. . .he has made himself a "lost cause" that nobody will take into their house at this time! He need to just shut-up for now. . .each time he opens his mouth. . .he loses credibility in the mind of the people. . .he dose have potential. . .but he has little social wisdom. . .dangerous for him politically! HE MAKE HIMSELF IRRELEVENT BY HIS MUCH RABID RENTING. . . HE IS NOW OF LITTLE EFFECT! I wonder how will it be before he turns on LBT!

Where is Rollins, LBT, or any of the seven? All I am hearing are Senator Moncur and Nicky Kelly in the punch having cognitive melt-downs trying to make LBT relevant. . .lol. . .anyone out there? And where is the rocin doc. . .lol!