Bahamas has worst total in region for rapes 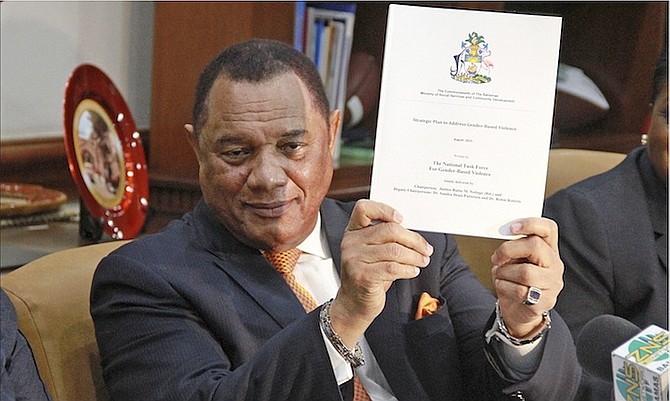 THE Bahamas leads the Caribbean in the number of recorded rapes followed by St Vincent, the Grenadines and Jamaica, a new report by the National Task Force for Gender Based Violence revealed yesterday.

The countries were included in statistics of the top ten countries where rape is prevalent.

In addition, from 2008 to 2012, annual police reports documented 9,045 incidents where females were the victims of assault in the country. These reports also alluded to there being numerous cases of domestic violence of a non-sexual nature.

This comes after Commissioner of Police Ellison Greenslade revealed last week that rapes increased by 16 per cent in 2015 when compared to 2014.

“The issue of rape, its magnitude and impact in the country demands further attention,” the report said. “The Bahamas has the highest incidence of rape per capita in the Caribbean. The UN Woman narrative on gender-based violence in the Caribbean cites ‘while the worldwide average for rape was 15 per 100,000, The Bahamas has an average of 133, St Vincent and the Grenadines 112, Jamaica 51, Dominica 34, Barbados 25 and Trinidad and Tobago 18.” The report further pointed to a survey which revealed that in nine Caribbean countries, 48 per cent of adolescent girls’ sexual initiation was forced or somewhat forced.”

The report, which also outlines a strategic plan to address gender-based violence (GBV), was officially handed over to Prime Minister Perry Christie yesterday. It links GBV to the increasing violent crime levels in the country.

When asked how confident the government was that this report would assist in getting a handle on this country’s crime challenges, Mr Christie said he was certain that his administration was on the right path to addressing the issue.

“What my administration has found out and has confirmed is that crime is so multifaceted in its manifestation and that this report confirms it, that it takes more than a government with the right policies and the right strategies to bring about the desired results,” Mr Christie said.

“This report again goes toward providing empirical evidence, meaning there is hard evidence that some things exist. Once you know that they exist you are able to design strategies to deal with them.”

He added: “With respect to the level of confidence, I am confident that we are on the right path to dealing with all of the social problems that we have and that many of them will take much longer than even I anticipated. But the point is that we are doing the right things and making the right decisions.

“We would move to implement the report insofar as governmental action is concerned. So you heard me indicate to you that the government is already in the process of construction or reconstruction and renovations of an existing physical facility to provide young people who are a challenge in school and who challenge the system with their behaviour and challenge their families.”

He said the government will dedicate the necessary resources to help the Crisis Centre in its implementation of the recommendations.

Mr Christie added that the government will also support the creation of a foundation to involve the Bahamian people in understanding that it goes beyond government resources.

The report also recommends that a GBV Authority be established as the statutory body to ensure that the strategic plan is implemented. The authority will be charged with oversight of all GBV initiatives.

The task force recommended several other proposals that they believe the government could implement by June of this year that will yield quick visible results.

Another record! It's just better in the Bahamas

“What my administration has found out and has confirmed is that crime is so multifaceted in its manifestation and that this report confirms it, that it takes more than a government with the right policies and the right strategies to bring about the desired results,” Mr Christie said.

But you said that you would solve our crime problem in 2012. You mean that you did not know anything about it? It has taken you 4 years to find out?

That's a little late don't you think? Not to mention misleading.

And PGC smiling in the photo? wtf? He obviously proud of his legacy!

Hmm should I take my family (3 teenage girls) to the Bahamas, or go to Cuba instead?

Tourist you are better off in Cuba. Sad to say but true.

The headline for this article should've been: "Happy Perry talks nonsense"

The problem is the social fabric in the Bahamas is tattered and torn and needs reinforcement. Too many young women are baby mamas for more than just one or two men and so they live in close contact with all of them. These men then go to war with each other and as the count can reveal, there is a loss of life. Also these baby daddies believe when they go to take the baby's money, they deserve a 'little reward.' This again causes conflict not only with the baby mama but the current spouse. And sometimes it can lead to child abuse. Then there is the serious cases of drug and alcohol abuse in this country. And when a young man is high or drunk, sex or even violent sex is next on his hierarchy of needs. He is not hearing "NO" even if if is repeated 1,000 times and in his mind "she is only playing hard to get." And young females also play their games where they would reach out to a guy for financial support and 'other tings'. Under the pretext that she has a sexual interest in him. Then when it's time for her to 'put out' she will 'play crazy' and cause the man to 'run hot.' Unfortunately the male will end up being charged with rape or assault and even though he could prove all the things he give her, the charges will stick because she did not give consent. There is also situations where girls are going out and getting just as wasted as the young men Yes some are smoking too. And sometimes they forget if they give consent, but when they sober up they feel ashamed and cry rape. So if a girl appears to have lost control, leave her alone and keep your freedom. In the case of rape it is usually one person's word against the other. And a famous line is 'if you see I was drunk you shudda leave me alone." Much easier said than done.

Some one once said, "Rape is like murder. Because when someone is raped, they die a psychological death. And their desire to live is gone if only for a long while.

You speaketh the truth here

So why exactly does Bahamas, and New Providence in particular, have to offer tourists these days? An empty Pink Elephant on Cable Beach, record murder levels, the worst rape statistics in the Caribbean, a myriad of resort taxes and VAT.

PLP took something good. and ruined it.

Waiting on a statement from the oh so silent Bahamas 'Christmas' Council expressing their rage over this latest discovery...1...3...3...