Gray: No Vendor Will Have To Move Their Stall 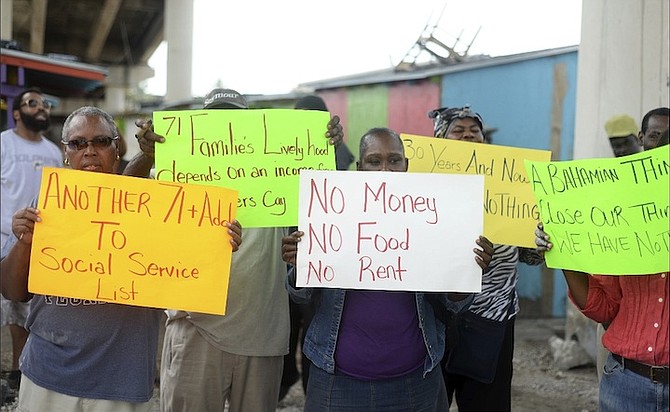 AGRICULTURE and Marine Resources Minister V Alfred Gray has declared that no vendor operating at Potter’s Cay Dock should fear losing their stall, contending that the government is only working to improve the historic site as a part of its multi-million dollar redevelopment exercise.

A day after members of the Potter’s Cay Dock Fish, Fruit and Vegetables Vendors Association staged a protest over claims that a number of them were to be moved from the area, Mr Gray said plans presented by his ministry only called for the “temporary relocation” of “sets of vendors at a time”.

According to Mr Gray, all the issues that spurred Tuesday’s protest have been amicably resolved, with officials from the Ministry of Agriculture, the Ministry of Works and the vendors association all now “working on one accord” to make Potter’s Cay Dock a better social site.

The association said on Tuesday that two vendors were notified on February 6 at 3pm that they had to attend a mandatory meeting at 4pm. It was reportedly at that meeting that the two vendors were given a week’s notice to vacate the area by February 13 - last Friday.

Ormanique Bowe, president of the association, told The Tribune that grievances raised by her group over the course of the week are now “water under the bridge,” insisting that the association is now working “hand in hand” with agriculture officials to convert the site into a world-class area.

“We are now friends and I am very thankful that we came to a conclusion,” she said.

“We are partners now, we are not enemies anymore and we are here to work together as a team for the betterment of the Bahamian people,” she said.

Meanwhile, Mr Gray in an effort to clarify Tuesday’s protest, said: “The entire controversy, which occasioned itself (Tuesday) was without my knowledge. If I knew that there was a problem, I would have worked to resolve it before it had become that.

“We now have a resolution and I believe everybody is happy with it. No vendor is being moved from Potter’s Cay; they are all staying. The government has intentions to redevelop the restaurant spaces at Potter’s Cay Dock while efforts are underway to fix issues with the bridge and work is being carried out to update the space as we know it.”

Mr Gray suggested that as operations at the site progress – construction efforts connected to the Paradise Island Bridge enhancement exercise – vendors near the construction site would be required to temporarily relocate to another section of Potter’s Cay.

Vendors are expected to be relocated to the western end of Potter’s Cay Dock.

Mr Gray also said that all the vendors along the Potter’s Cay thoroughfare would have their businesses affected at some point to allow for construction plans to be carried out.

Last November, the government announced a three-phased redevelopment plan for Potter’s Cay Dock, a joint effort between the Ministries of Works; Agriculture and Marine Resources and Transport and Aviation.

Phases one and two are now underway. The phases are being carried out simultaneously and are expected to be completed in May.

The Ministry of Agriculture and Marine Resources had come under fire for its slow approach to the redevelopment efforts.

Referring to that claim, Mr Gray denied that his ministry deliberately delayed the process. He said the Ministry of Agriculture and Marine Resources was not capable of developing building plans and had to wait until the Ministry of Works had completed the plans.

The Tribune understands that the Ministry of Agriculture and Marine Resources has finally been presented with reconstruction plans for the stalls at Potter’s Cay - both options were presented to the members of the vendors association and agriculture officials early Wednesday morning.

Both reconstruction options presented to the Ministry of Agriculture and Marine Resources called for the inclusion of modern plumbing and electricity capabilities.

Of those two options, sources told The Tribune that vendors have made a push for the more festive, upscale stall option - a design that would call for the construction of patio decks, which would extend over the water at the rear of each stall.

There are approximately 40 stalls operating at Potter’s Cay - roughly 28 of which are restaurants.

Mr Gray proposed that the restaurant stalls would be reconstructed in clusters of “two’s and three’s.” As a set is completed, construction crews will progress until all of the stalls are completed.

When asked how much the government would spend on the reconstruction effort, Mr Gray would only say that the price tag was in the multi-million dollar range. He insisted that a final price tag would be made public after vendors and ministry officials had finalised plans for the site.

am i correct in assuming that these vendors do not pay any fees / rent etc to be located here? and yet the government is using tax payers money to beautify, expand and build their businesses - and who will be responsible for maintaining the areas and keeping them clean? because up until now these vendors certainly are not doing that. and do these vendors pay business licenses, are they up to date on their National Insurance? Do they contribute in any way or will they simply continue to take, take, take. We certainly our a country where everyone wants the government to do everything, yet no one wants to pay taxes or fees. i agree that potters cay needs to have work done as it is an eyesore - but who is to say it won't become that again within months of the completion date? there needs to be some accountability by these vendors. i say if they don't keep their places clean they receive a warning and on a 2nd warning they are shut down.

Right across the street from all this ruckus is a lengthy vacant property on the side of Dominoes pizza. It stretches from Bay Street right on to the back street. As I understand it, it is owned by the Fountain/Isaacs family. Sir Cyril Fountains' wife.

I suggest that this would be an ideal temporary location form the vendors until construction repairs are completed.

Godson 'Nicodemus' Johnson All About Solutions...

That place is a dirty disgusting unkept dump - why should they sink millions into it just to let it fall down again? Another colossal waste of money aimed at securing votes.