Despite injury, Jonquel on pace to be WNBA Draft Lottery Pick 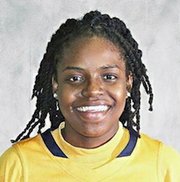 DESPITE a lingering shoulder injury which has kept her out of the last eight games, Jonquel Jones remains in contention for many of the NCAA’s top awards and on pace to be a WNBA Draft Lottery Pick.

Jones has missed the last eight games for the George Washington Colonials as they struggle without her through the latter part of the A-10 schedule, but she is still highly touted as one of the best prospects in the NCAA to enter the this year’s draft.

Jones is listed by several reputed draft sites as a high first rounder. Both Draftsite.com and WNBAdraft.net project her to go at

No.4 to the Connecticut Sun while Excellesports.com projescts her to go at No.8 to the Phoenix Mercury.

WNBA Draft 2016 presented by State Farm will be held on Thursday, April 14 at Mohegan Sun Arena in Uncasville, Connecticut.

ESPN2 will provide coverage and analysis of the first round beginning at 7pm and ESPNU will air coverage of the second and third rounds starting at 8pm. The draft comes one month before tip-off of the WNBA’s historic 20th season, which opens on Saturday, May 14.

The 2015 Atlantic 10 Player and Defensive Player of the Year and an honourable mention All-American, Jones is a candidate for several national player of the year honours in 2016, including the Ann Meyers Drysdale Award and the Naismith Trophy. The Eight Mile Rock, Grand Bahama native, who has posted 15 double-doubles in 19 games played this season, was the nation’s leading rebounder (14.8 rpg) and ranked second in the Atlantic 10 in scoring (16.9 ppg) and blocked shots (3.0 bpg) before suffering an injury in mid-January which has sidelined her ever since. That injury has not shied coaches and general managers away from the potential.

Jones has also been chosen as one of 10 women’s basketball finalists for the SeniorCelebrating Loyalty and Achievement for Staying in School (CLASS) Award.

The Senior CLASS Award focuses on the total student-athlete and encourages students to use their athletic platforms to make a positive impact as leaders in their communities. To be eligible for the award, student-athletes must be NCAA Division I seniors and have notable achievements in four areas of excellence - community, classroom, character and competition.

Jones is the third Colonial ever with 1,000 points, 800 rebounds and 100 blocked shots, and she ranks third all-time at GW with 906 rebounds and sixth with 159 blocks as a Colonial.

For her career, which includes eight games at Clemson as a freshman, she has compiled 1,197 points, 986 rebounds and 176 blocked shots. In addition, the 6-6 forward’s 281 rebounds in 2015-16 rank eighth on GW’s single-season list after she set the programme record with 375 a year ago.

In the classroom, Jones owns a 3.04 grade-point average as a criminal justice major. She was recognised on the GW Athletics Academic Dean’s List for the Fall 2014 semester and on the A-10 Commissioner’s Honor Roll for Fall 2013.

Jones, the 21-year-old six-foot, four-inch criminal justice major, is the daughter of Ettamae and Preston Jones of Grand Bahama.