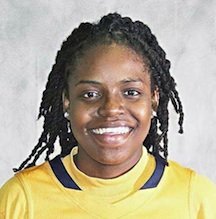 Despite injury, Jonquel on pace to be WNBA Draft Lottery Pick

DESPITE a lingering shoulder injury which has kept her out of the last eight games, Jonquel Jones remains in contention for many of the NCAA’s top awards and on pace to be a WNBA Draft Lottery Pick.

SENIOR Jonquel Jones scored 23 points and pulled down 18 rebounds to lead the George Washington Colonials women’s basketball team to a 70-52 win over No. 25 Duquesne at the A.J. Palumbo Center yesterday.

Jonquel making a name for herself on the hardwood

SHE is only the second Grand Bahamian and the third Bahamian female basketball player to advance right out of high school into a major division one collegiate programme.

Jonquel eligible to play for Colonials in January

WHEN she takes to the court in the Spring 2014 semester, George Washington University will represent a fresh start for talented forward 19-year-old Jonquel Jones in NCAA basketball.