Minnis Calls On Govt To Declare A ‘War On Guns’ 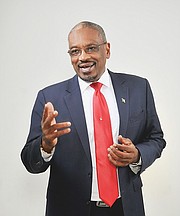 FREE National Movement Leader Dr Hubert Minnis has called on the government to declare a “war on guns” and establish a dedicated intelligence gathering facility to partner with the international community for this purpose.

Dr Minnis said The Bahamas needs an agency similar to Operation Bahamas, Turks and Caicos (OPBAT), a drug interdiction agency established through a partnership with the United States to stem the flow of drugs.

“The criminal element is having a huge impact on our society, we are losing young men, women and families - the economy is being impacted,” he said. “It is having a significant strain on our healthcare resources, the social fabric of our nation and it’s also leading to a brain drain.

“As you speak to the young people abroad, they are deterred from coming home because of the violence they are hearing about. It is time for the government to declare a war on guns. In the 80s, the US declared a war on drugs, the drugs were moving through the Bahamas and into the US, and affecting the US way of life.

“As a result of that, OPBAT was established. Now the guns are coming from the US and affecting the Bahamas. Individuals are selling guns and ammunition. There is a market for guns and a market for bullets – the criminals are establishing an underground economy for guns and bullets.

“Therefore, The Bahamas must declare war on guns and establish an agreement to create an entity like OPBAT for guns. With intelligence gathering and the US involvement we would be able to tell where the guns are purchased – we must get at the source so we can stop the flow of guns from America into our cities.”

According to The Tribune’s records, the country had a record breaking 149 homicides in 2015, many of them committed with a firearm.

There not only needs to be a war declared on guns but a war declared on the gun mentality. The desire to tote arms and bare weapons. UNFORTUNATELY our neighbors to the North want to move in the opposite direction. They want to arm more of their citizens, legally so that not only will they be able to protect themselves from local violence, but be armed in the event of terrorist attacks. Our (Bahamas) gun toting culture does not stem from a desire to protect oneself legally from criminals but is predicated on thug life, goon squads, illegal and antisocial behavior. This is what needs to be dealt with. And in the swiftest and most severe manner possible. Else the good citizens will have to protect themselves, their families and their property by any means necessary

This is the absolute truth of what is wrong in the Bahamas today.

Successive governments have inculcated into Bahamians that we are children of a lesser made, made for catching the crumbs off the table of foreigners.

Like rats in a cage, we embrace this vision thrust down upon us, and have lost not only our moral compass but faith in ourselves to actually punish the politicians who have so disrespected us and our country.

And the non-patriots like Tal and birdie who rabidly and blindly support the PLP because they crumb-catch from the PLP and are satisfied with their lower-than-politician minion status, deserve to be punished for crimes against the Bahamas as well.

The appetite for materialism is not one that was born out of Black culture. If you understand the destruction of Chicago and Detroit and other major, predominantly Black metropolitan inner cities in the US you would know that most of it was underhandedly planned and international. As the powers that be realized that Blacks would be given equal rights which would mean more income, they devised more ways for Black persons to destroy themselves, their income and each other. Hence many of those who produced and promoted the rap and hip hop music were not black. This music promoted the "bling bling" lifestyle, the drug and gun culture, the guns and violence, the baby daddy syndrome, infidelity and even the habit of going to jail for fame. It spilled over into the Bahamas a the Caribbean. The leaders of these countries were distracted. Their treasuries and natural resources raided and now we all stand like the emperor with no clothes. But we must soften our hearts and make our way back to God to cover our nakedness and restore again. Man alone can no longer fix the problems of this world. Their hearts are too hardened their claws are too greedy and they refuse to be their brothers ' keeper.

"A gun in the hand knows no friend" Who are putting the guns in the young peoples' hands?

Ps Cuba is opening up to the US. It will be interesting to see what happens with its crime and culture and lifestyle in general over the next 5 years.

I'm calling on the media to declare a war on hot air.