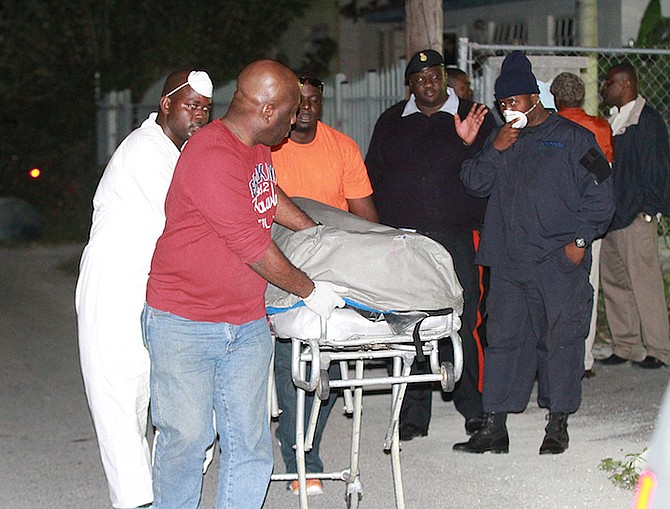 UPDATE: Police want to speak with 30-year-old Jason Ian Flowers, also known as Casper, of Sir Lynden Pindling Estates in connection with this incident. Anyone with information on the whereabouts of Jason Flowers or anyone with information on this homicide is asked to contact police at 911 or 919, the Central Detective Unit at 502-9991 or Crime Stoppers anonymously at 328-TIPS.

POLICE found a 21-year-old man dead inside his Pinewood Gardens home on Tuesday night, bound with duct tape and “wrapped in plastic”.

According to Chief Superintendent Paul Rolle, officer-in-charge of the Central Detective Unit, the man’s relatives reported him missing to officers of the South Beach Police Station earlier in the day after he had not been seen since Saturday.

Police, along with the man’s relatives, went to his home on Sugar Apple Street, where the victim was found “in the early stages of decomposition” around 8pm.

“Officers went and checked his home with family members and found him on the floor of the bathroom wrapped in plastic bags and duct tape,” Chief Supt Rolle said.

He added that police are treating the matter as a homicide. Police did not release the man’s identity but said he is 21.

Chief Supt Rolle said it is too early to speculate on a motive for the killing.

The death marks the country’s fourth homicide for the first 19 days of this year. In 2015, there were a record 149 homicides.

stats, fact and figures are ALWAYS garbled. ALWAYS!!!! they said they only lost 3$mill on carnival.... they say only 149 murders in 2015.... when i look into it my self, both figures are higher

@sheeprunner , we first have to appoint a committee , that will look into this matter , after the committee has been selected , they will report there findings to a select committee of stake holders , who will them make a recommendation as to the way forward , this select committee, will then report there finding to parliament, then parliament will select an able bodied group of parliamentarians , from both sides (to avoid the a conflict of being politically biased , for as we all no crime is not a political thing but affects us all )once this group would have done there job, the entire thing will be turned over to the cabinet and will be placed before the public, then the government will have town meetings to address the glaring reports of the report . so until then stay tuned

Sounds like a suicide to me, why would they treat this as homicide. At worst, maybe accidental death!

The person they want to question on this matter was recently released from jail. See how the cards are turning. Usually it is the person recently released from prison, or wearing an ankle bracelet or "known to police" who is the murder victim. If you add the number of unclassified deaths to the 149 homicides last year, that will give you an idea of the number of persons who died "at the hands of someone else," in the Bahamas in 2015. Call it what you like. BTW what was the classification of the old man found dead in bushes in Coral Harbour after allegedly wandering from his home?