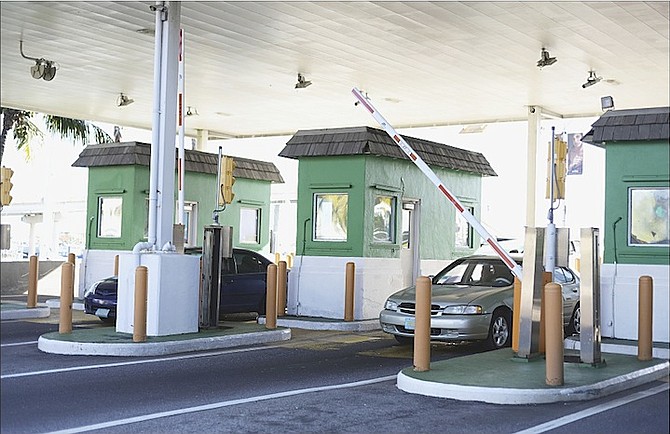 THE Bridge Authority plans to double toll rates for private vehicles crossing the Sir Sidney Poitier Bridge from $1 to $2 per passage effective from March 1.

Rory Higgs, chairman of the Bridge Authority, made the revelation at a contract signing ceremony yesterday. He was unable to give the complete scope of the proposed fee increases but said his organisation intends to present a full fee schedule in the coming weeks.

He said the rate increase would offset the cost of refurbishment specifically for the eastern bridge and maintenance expenses for both overpasses linking Paradise Island to New Providence.

The Bridge Authority signed a $5,359,421.50 agreement with local engineering firm Island Site Development to carry out repairs on the eastern overpass after a detailed inspection of the bridge revealed that several components exhibited varying levels of deterioration which required some form of rehabilitation.

Mr Higgs said the Bridge Authority concluded that it would be in the interests of safety and cost-effective practices to have the eastern bridge undergo immediate, comprehensive refurbishment with a scheduled replacement in 2042.

As a result of that decision, the Bridge Authority commenced a “rigorous” tender process in which 12 engineering firms expressed some degree of interest. Four asked to tender bids, three submitting bids and finally, Island Site Development was selected to carry out a 42-week redevelopment exercise.

This project, along with a number of others currently being carried out by the Bridge Authority, is the result of a $28m private placement bond being funded by shareholders through the Central Bank of the Bahamas.

However, none of the parties present – government officials and officials from the Bridge Authority – could clarify specifics related to shareholders and the bond.

The Tribune understands that, to date, the Bridge Authority had managed only to repay roughly $6 million on the private placement bond.

Prime Minister Perry Christie, during his address at yesterday’s contract signing, insisted that the project signified the government’s continued effort to ensuring that infrastructure critical to the country’s development is constructed and maintained in the most cost-effective way.

Mr Christie also made a point to stress the important role the bridge plays in the relationship between the Bahamas and the scores of resort properties operating at Paradise Island.

“This is a very significant part of the mainstay of our country,” he said.

Ed Fields, senior vice president of public affairs for Atlantis, told reporters that while the premise of the contract signing aims to positively affect the country’s tourism product, the cost of the project has forced the Bridge Authority to hike toll fees, which he noted could be a negative drawback for Paradise Island.

Mr Fields revealed that Atlantis subsidises nearly 50 per cent of toll fees for its employees – a figure some experts estimate could be in the tens of thousands dollar range.

Repair efforts are expected to get underway on the eastern bridge early next month.

Island Development Site President Larry Treco warned that while there may be some logistical issues with respect to traffic manoeuvring over the bridge and day-to-day operations for some vendors at Potter’s Cay Dock, his company intends to minimise its effect with the use of hydroplanes.

Mr Treco said his company has been contracted to repair structural faults associated with the bridge’s piling columns above water and underwater; support beams; support girders and sidings.

Additionally, Labour Minister Shane Gibson indicated that some 30 to 40 Bahamians are expected to be employed as a part of the reconstruction efforts.

Last November, a decision by the Bridge Authority to add a VAT charge to tolls for all vehicles was met with staunch opposition, forcing the group to backtrack within days.

Can the Tribune clear up who own's the Bridge, does it have a budget, why they have only repaid 6 million and to who? You guys need to start to ask QUESTIONS, what are you scared of? This country is on the brink and without honest, hard hitting reporting we are DOOMED. ASK QUESTIONS THAT MAKE THE POLITICIANS UNCOMFORTABLE!

The Tribune did this story absolutely no journalistic justice at all. I echo the sentiments expressed here prior to mine - do your jobs on this and other stories of its kind.

Seems like standard procedure: awarding overpriced contracts to select firms with a nice system of kick-backs supported by an 'out-of-the-air' budget that is conveniently large enough for a lot more money to fall through the cracks.

There are a few exceptions but most Bahamian journalists are afraid to dig deep for fear of being victimized - the problem of living in small islands.

More money to be WASTED & not accounted for , but then it will help stop that big boulder from rolling down the hill. It will roll upward right Mike ? LMAO

Comrades while there is NO proof of Island Site Development ever donating or agreeing to make political campaign donations, wouldn't you be more interested in exactly where the millions upon millions in $1 tolls - ended up?
Besides, it's the norm to make campaign donations without disclosure, and if I owned/controlled a major company hoping conduct lucrative business with government, I certainly would grease the political wheels - the way of both the governing and opposition parties,
The years Toll revenues off cars crossing Paradise Island Bridge would amounts much more millions than the $138 millions da Minister Tourism Obadiah says he is expecting to collect in numbers selling revenue taxes, from the legalization the numbers rackets?

Total lack of transparency on the part of the Government.