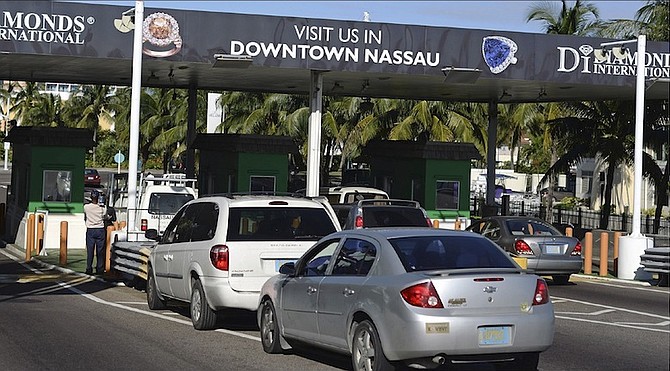 On Monday, the Bridge Authority announced that it plans to double toll rates for private vehicles crossing the Sir Sidney Poitier Bridge, which links Paradise Island to New Providence, in March.

Rory Higgs, chairman of the Bridge Authority, said the rate increase would offset the cost of refurbishment efforts for the eastern bridge and maintenance expenses for both bridges.

In October 1997, the government agreed to pay Interbeton BV, a company based in the Netherlands, $21.6m to design and construct a second bridge, from New Providence to Paradise Island.

The parties also agreed to a $4.9m restoration of the eastern bridge.

In March 1999, the Bridge Authority issued a $28m bond to cover these costs, along with additional financing and pre-opening costs.

However, speaking to The Tribune on Tuesday, Mr Bowe said the public only had the “slightest idea” of the Bridge Authority’s bond arrangement, rates of income, overhead responsibilities and expenses related to the maintenance of bridges across the country.

Mr Bowe said there is a “delicate balance” between a public entity saying they need an increased financial base and explaining in detail why it needs more money.

“What is the cost to operate the bridge? That should have been the first question asked and answered in this process,” he said.

“The Bridge Authority was established to be a self-serving mechanism. The idea was essentially: ‘We can make enough to repay the bond, pay the interest; and still have sufficient financial resources to operate facilities, pay staff and maintain these two bridges.’”

Referring to the Bridge Authority’s bond obligation, Mr Bowe questioned if the Sir Sidney Poitier Bridge’s financial intake could have ever covered the authority’s entire obligation if it remained at the $1 toll charge.

“I believe that the increase was necessary and once all the factors are explained and brought to the public maybe they would come to the conclusion that the fee of $2 is understandable.”

“You have to understand, it takes a great deal to sustain that operation. Ask yourself this, if the bridge wasn’t in place would you be okay paying $3-$5 for a ferry ride on a day-to-day basis?”

There continues to be very little effort on the part of the Bridge Authority to clear the cloud secrecy that covers the organisation’s financial records.

A large part of the Bridge Authority’s financial data that makes its way to the public comes as a result of estimations on the part of the media.

Figures related to expenditure, daily toll intake and the average number of vehicles using the Sir Sidney Poitier Bridge on a year-to-year basis are still unknown.

There continues to be very little effort on the part of the Bridge Authority to clear the cloud secrecy that covers the organisation’s financial records.

What is clear however is they want to double their income.