Call For Facts In Bail Debate 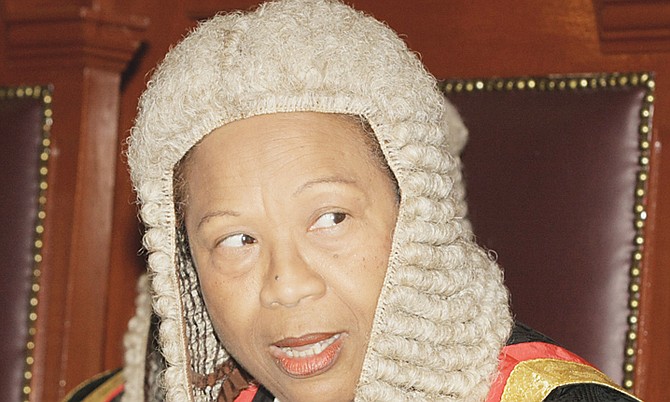 COURT of Appeal President Justice Dame Anita Allen yesterday challenged critics of the judiciary’s role in the fight against crime to provide researched data proving the correlation between the court’s decision to grant bail and escalating levels of violent crimes including murder.

Dame Allen said the judiciary has been incorrectly blamed for the country’s crime woes and rise in violence.

The top judge did not mince words when defending judges’ discretion to grant bail to accused persons whose constitutional right to trial within two years is breached by delays and adjournment of cases beyond what the law allows.

“Those who criticise the judiciary for granting bail have singularly failed to show any empirical data that we have not logically and consistently followed the Constitution of this land and other provision of our law,” she said, during the opening of the Court of Appeal’s legal year. “Indeed, they have failed to show the correlation between the grant of bail and rise in crime.

“For notwithstanding fewer persons were granted bail in 2015, the homicide statistics for 2015 did not reflect fewer crimes,” Dame Allen added.

“Before making such allegations, I exhort those commenting on the state of affairs to gather such data, and examine the reasons why bail has been granted, remembering that a person who has not been brought to trial within a reasonable time is constitutionally entitled to bail and all persons charged with a criminal offence are entitled to the presumption of innocence. Without such data, the naked disparagement of the judiciary that arbitrarily grants bail and is responsible for crime is unfounded and only serves to undermine public confidence in the courts.”

Dame Allen stressed that the right to bail is a constitutional one.

“The inescapable reality is that The Bahamas has a constitution in which persons charged with criminal offences are not only presumed innocent until proven guilty or plead guilty, but are also guaranteed the right to a trial within a reasonable time. The judiciary is the guardsman of the Constitution and the right to bail afforded by these provision must be protected by it.

“The legal reasoning on bail propounds that the primary goal of denying bail is to secure an accused’s appearance for trial so that, should he be found guilty, he is available to be punished. However, the Privy Council cautions in Hurman v the State (2005) that if a person’s presence at trial can be reasonably assured other than by detention, it would be unjust and unfair to deprive him of his liberty. It must be understood by all that a person’s constitutional rights to the protection of law and to be tried within a reasonable time are not terminated by an arrest.

“Consequently, were we to accede to the public clamour, we would create a rogue jurisdiction in which the rule of law is ignored,” the Court of Appeal president stressed.

Commissioner of Police Ellison Greenslade has frequently blamed the “revolving door of bail” for prolific offenders for the country’s high crime and murder rate.

In December, Attorney General Allyson Maynard-Gibson QC, pushed back against this criticism.

While in the past Mrs Maynard-Gibson has, to a limited extent, expressed concern about the degree to which some people brought before the courts are given bail, she suggested that the people granted bail in 2015 were largely deserving of it.

Addressing the 2016 legal year opening ceremony held in the Supreme Court two weeks ago, she stressed to Chief Justice Sir Hartman Longley that “concerns remain in relation to persons released on bail having been charged with serious offences, including murder.”

Sir Hartman acknowledged the public outcry on crime and the perception of a revolving door on bail. However, the chief justice, like his predecessor Sir Michael Barnett, held firm that the granting and refusal of bail is a right entrusted to the judiciary alone by the Constitution.

Do what the USA does. Charge the person with a lesser crime which goes through the legal system very quickly and then go for the big one later. In our case, charge them with gun possession which most likely will result in them receiving a sentence of about seven years. The attorney general now has seven years to pursue murder charges. Bail becomes a mute point.

That is a DISGUSTING idea. Basically what this does is force people to accept being treated like an animal for 7 years, instead of 20 years - because they have no other reasonable choice. Not everyone can afford lawyers,and NOT EVERYONE who is arrest is guilty.

These liberties of bail and release are made for YOU !!!! YOU, you silly person. You must consider what would happen you were wrongfully accused. Did you vote for the wrong party? Did the ruling party have a "friendly" policeman arrest you for no good reason and accuse you of possession of heroine or cocaine which he/she had in their pocket?

I don't think that people not convicted in two years should be given bail either - I think they should be released WITHOUT CONDITION. Completely set free. They should even be paid $10,000 per year for being held as an animal without sufficient proof to convict.

FIX the damn slow system that holds people like this - and figure out how to convict real murderers and other serious criminals in a reasonable time. We were supposed to get 10 new criminal courts last year - DId we get them? DO they have judges staffing them (one for each court at least)???? Of course we don't.

But you go ahead and be stupid, and remove the protections that protect YOU and then when you get a really really bad PM like Papa Doc - then YOU can be put in prison for NOTHING forever. Good luck with that.

As citizens we cannot even obtain a listing of persons held in the prison, their dates of entry, and expected dates of release,and accused/convicted crimes. You can't even get information as a citizen, so how can you expect anything real?

We are talking about individuals who are most likely guilty been caught with the gun that killed someone. They will be tried in the same system whether for gun possession or murder. The suggestion will help both the accuse and the judiciary by testing the state case against the accuse. If you can't get a gun possession to stick then most likely you will not get a murder charge to stick. It's very important to think before you write so as to prevent a monologue lacking reasonable clarity. The US justice system saw the logic of what was suggested so I assume you view them as silly also.