Gift To Hospital To Help Care For Those In Need 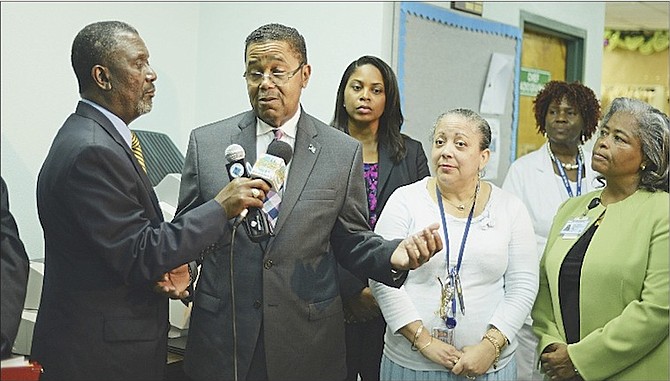 Dr Perry Gomez, Minister of Health, speaks at the presentation of three new dialysis machines to the dialysis unit and a new mammography workstation to the radiology department at the Princess Margaret Hospital.  Photos: Shawn Hanna/Tribune Staff

Dr Gomez said that renal failure and breast cancer are two of the most common ailments affecting the Bahamian society and claimed they placed added importance on the government’s proposed NHI scheme.

According to Dr Gomez, the stance taken by private insurers in matters where these ailments exist often leave many Bahamians in a pay or die position.

He added that NHI, once properly formatted and initiated, will look to address matters such as kidney conditions and terminal care associated with cancers.

He added: “Under NHI that will not happen. NHI will cover everything.”

The hospital’s foundation, through partnerships with The Tribune Media Group and FYP Builders Mall with respect to its “Donate Dialysis” campaign; and Marathon Bahamas with respect to its “Caring for Breast” initiative raised the $213,000 needed for the essential equipment.

It prompted Dr Gomez to label the initiatives as the “perfect example of private entities aiding public facilitates with instruments critical to saving lives”.

In May 2007, the Princess Margaret Hospital Foundation Board partnered with Tile King (subsidiary of FYP) and The Tribune Media Group to launch the “Donate Dialysis” campaign.

The goal of the campaign was to secure sufficient funds - $164,000 - to purchase eight modern dialysis machines for Princess Margaret Hospital (PMH).

The Tribune initiative helped raise a total of $341,000 and from that six machines were procured - four for PMH and two for the Rand Memorial Hospital in Grand Bahama.

Similarly, the “Caring for Breast” initiative resulted in $66,000 towards purchasing a new digital mammogram machine in 2012 and outfitting a radiology workstation earlier this year.

The new addition of the workstation allows more efficiency of mammogram reports for patients and all radiologists in the department to double the rate of mammograms per day.

As recently as Wednesday Prime Minister Perry Christie noted that the push towards implementing NHI has more to do with saving lives, than it does with scoring political points.

The Christie administration has estimated that some 200,000 Bahamians are without health insurance.

He added: “Under NHI that will not happen. NHI will cover everything.”

Do socialized healthcare systems in other countries "cover everything"???? Are we to believe then that NHI (argued to extend healthcare to people who have no money to pay for it) will be able to cover "everything"??? For everyone?!?!?!

Of yeah i forget, the rest of the world are morons, but the PLP have the answer.

BTW Tribune, is that 3 or 4 dialysis machines?

so if you are hungry, you cut your veins, you go to the hospital and they take care of you. wipe your ass, feed you - all free. When you need a bed, you check into the hospital claiming some ailment, when you need a roof over your head because your baby mama kicked you out, get drunk until you pass out and you get accommodated under NHI. This "free for all" message by the government is a PR disaster.

c'mon tribune, yall need either clarify or do some investigations as to why this sounds do wrong -

"The goal of the campaign was to secure sufficient funds - $164,000 - to purchase eight modern dialysis machines for Princess Margaret Hospital (PMH)."

'The Tribune initiative helped raise a total of $341,000 and from that six machines were procured - four for PMH and two for the Rand Memorial Hospital in Grand Bahama.'

This looks like some PLP math, you wanted to purchase 8, you received more than twice the amount of money need for 8 machines so you only purchased 6???? Please explain this disaster of the facts??

Just two questions -- why, if NHI is in place and it will be the most amazing health care ever, is it that the hospital needs to receive charitable donations for equipment? What happened to all that money the PLP got to equip the hospital anyway?