54 Cubans Taken Into Custody In Grand Bahama In Three Days 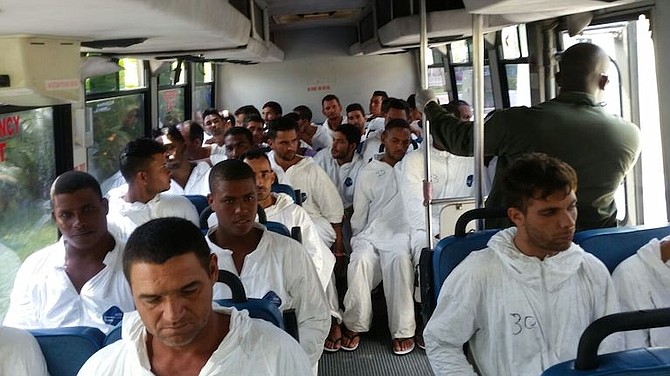 Some of the Cuban migrants captured and taken to Grand Bahama this week.

On July 3, 13 migrants – 10 men and three women – were discovered at Old Bahama Bay, West End. The group reportedly left their homeland on May 29 in the hope of reaching Florida, but instead landed at West End, 55 miles short of the Florida coast.

According to Immigration officer Napthali Cooper, authorities went to West End and took the migrants into custody and transported them to the West End Police Station.

The migrants told officers that they left Cuba on May 29. They were taken to Immigration Headquarters for further processing and flown to New Providence where they will be housed at the Detention Centre to await repatriation.

A second group of 34 migrants was brought to Grand Bahama on July 4 after they were intercepted at sea by the US Coast Guard (USCG) in the Cay Sal Bank area in four separate incidents.

The US Cutter Robert Yared arrived at Freeport Harbour around noon with 32 men and two women, who were discovered onboard rustic vessels that were reportedly headed to Florida. They were turned over to Bahamian Immigration authorities.

Mr Cooper reported that one of the females is known to Bahamas Immigration officers and was in their custody three weeks ago.

“This is the third time she has been intercepted at sea by the USCG and handed over to us and subsequently sent to Nassau to the Detention Centre and repatriated to Cuba,” he said. The group was flown to New Providence on board two Pineapple charters.

Mr Cooper also reported that a third group was brought to Freeport on July 5 by the USCG. He said the USCG cutter Robert Yard called at Freeport Harbour around 8am with six Cuban migrants who were discovered stranded on a Cay in the Cay Sal Bank area. The men - who appeared to be in good health - claimed that they left Cuba for Florida 14 days ago on board a rustic vessel.

However, two days after leaving Cuba their vessel became disabled and they were forced to take refuge on a cay, where they survived eating land crabs and birds until being taken into custody by the USCG.

The group was turned over to Bahamian authorities at the harbour and transported to Immigration headquarters for processing. They were flown to New Providence, where they will be detained at the Detention Centre for repatriation.

Many migrants leaving Cuba pass through the Bahamas on their journey to make it to America. If they make it past the Coast Guard. Once their feet touched land, they are allowed to remain in the US and would qualify for expedited "legal permanent resident" status and eventually US citizenship.

There have been many interdictions in the last few months at Cay Sal Bank, just south of Florida and a little north of Cuba. USCG cutters patrol the area and all interdictions are turned over to Immigration authorities in Freeport.

During a recent interview, Immigration Minister Fred Mitchell noted that Cubans are intent on reaching the US and will not stop. He noted that they are also now entering the US through Mexico.

According to the Center for Immigration Studies website, over the last couple of months, thousands of Cuban migrants were transferred from Central America to Mexico. And once at the US-Mexico border, under the current interpretation of the Cuban Adjustment Act (CAA) and the "wet foot, dry foot" policy that grows out of it, Cubans without visas are waved into the United States and are given legal status and full access to welfare programmes.

It was reported that the number of new arrivals annually nearly doubled from 2014 to 2015, and is roughly six times higher now than it was in 2009, which marked the most recent low point. According to a table entitled ‘US Customs and Border Protection, Office of Field Operations, Visa-Less Cuban Aliens FY 2004- FY 2015’, it was reported that, in 2016, a total 25,806 Cuban migrants had crossed the US-Mexico border and other US land ports of entry, to take advantage of the CAA and is not a new trend.

Last October, the Cuban government announced that it would no longer require the much-maligned exit visa for anyone wishing to travel abroad. All a Cuban citizen will need is a passport and a visa for the country he plans to visit. This new Cuban policy took effect on January 14.

"#Last October, the Cuban government announced that it would no longer require the much-maligned exit visa for anyone wishing to travel abroad. All a Cuban citizen will need is a passport and a visa for the country he plans to visit. This new Cuban policy took effect on January 14."

Comrade ThisisOurs, the reason why Cubans are still leaving is the subject of some debate. Many Cubans see the reopening of relations between the U.S. and Havana will bring about the ending the so-called wet foot, dry foot policy that allows Cubans to live legally in the U.S. if they successfully make it to US shores. Cubans are the only immigrant population who are afforded such an advantage, and there is much concern there will be a change of policy if Cuba’s failed economy is transformed by the reopening U.S. relations.
The U.S., not Bahamaland is the intended real destination of choice of the 54 Cubans. I am not at all sure if the wet foot, dry foot immigration policy, also applies to Cubans arriving into the US on visitor visa?
Then again, why would thousands Haitians want to risk their lives at sea to make their way to Bahamaland, when they can obtain a travel passport and exit visa to board a plane for a flight here....and at a far cheaper dollars cost than paying a smuggler?