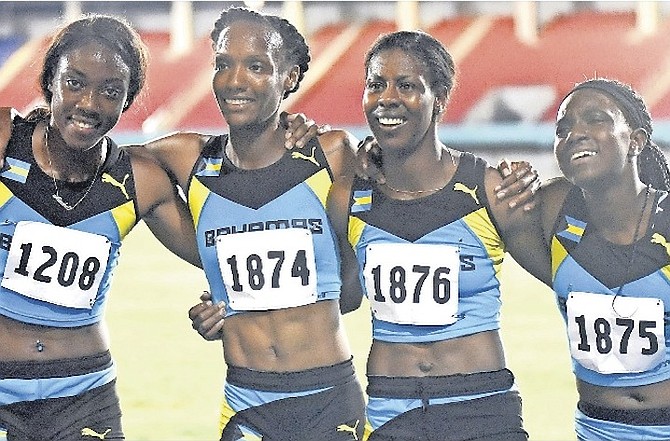 The quartet of Carmeisha Cox, Lanece Clarke, Christine Amertil and Shaquania Dorsett were left off the original team of 28 athletes named on Wednesday because of a delay in the court ruling on the Russian Olympic Committee.

The IAAF had imposed a ban on Russia’s athletics federation from the August 5-21 games over claims of state-sponsored doping.

But the Russian Olympic Committee and 68 athletes, including two-time Olympic pole vault champion Yelena Isinbayeva, have taken their case to the Court of Arbitration for Sport. A ruling was made yesterday, paving the way for the Bahamas women’s team to secure their lane in Rio.

Apparently, the Bahamas was occupying the 17th spot in the world with Russia pegged at No. 10. However, because of the court ruling that will now prevent Russia from competing in the games, the Bahamas has been pushed up to the 16th and final spot.

“It was only this morning that The Bahamas Olympic Committee in concert with the Bahamas Association of Amateur Athletic Associations received communication from the IAAF inviting The Bahamas to enter the 4x400 women’s relay team to participate in the BTC Bahamas National Team travelling to Rio de Janeiro,” the BOC stated in a press release.

“The Bahamas Olympic Committee accepted the invitation and the following individuals have been named to the team: Christine Amertil, Lanece Clarke, Carmeisha Cox, Shaquania Dorsett, Shaunae Miller and Anthonique Strachan.  The Bahamas Olympic Committee congratulated the six young ladies on their qualification and wished them the very best during the Rio Olympic Games.”

Both Miller, who qualified in the 100, 200 and 400m, and Strachan, who did the standard in the 200m, were originally named to the team on Wednesday.

“We’re excited that the Bahamas women’s relay team has qualified after the court arbitration has made a ruling to uphold the ban that was initiated by the IAAF on the Russian athletes,” Knowles said.

“So we are excited that we are included in that regard, but it’s sad that once again, when we named the team yesterday, we were put in a position where we could not name the relay team due to an infraction in the rules of the game.”

Knowles noted that the BOC empathises with Russia, the IAAF and the IOC because he felt that it might have been the most difficult decision that they would have had to make.

“Now the decision has to be made whether the Olympic ban is for all of the Russian athletes,” Knowles said. “But that saddens all of us because they are brothers and sisters and obviously at the same time, we want everybody to play clean.

“We hope that the IAAF and the IOC can clean up the sport and in the future, these things can be avoided by more thorough investigation and testing.”

With the athletes are pending travel to Rio, Knowles said the BOC could now confirm the team’s participation in the games and are looking forward to advising the athletes of the final decision.

“Quite frankly, we put ourselves in this position because we had a number of chances to qualify outright,” he said. “Unfortunately, we did it at the last minute. But we are grateful nonetheless.

“I just think that moving forward, the BOC and the BAAA will have to be more vigilant in the qualifying of our athletes, especially our relay teams. We need to put our best foot forward well in advance so that we can ensure that we get a higher ranking to avoid this type of problem.”

The women’s team will join the men’s 4 x 400m team, which clinched their second place berth overall from the IAAF World Relays in the new Thomas A Robinson National Stadium last year behind the USA.