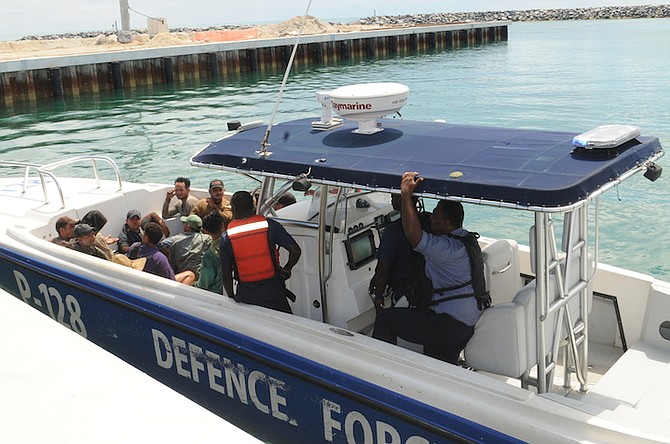 FOURTEEN Cuban migrants have been turned over to officials at the Carmichael Road Detention Centre in New Providence after being apprehended by the Royal Bahamas Defence Force (RBDF) on Saturday afternoon.

The 14 undocumented Cuban men were taken aboard the Defence Force vessel and transported to Coral Harbour Base, where they were handed over to Immigration officials for further processing.

Twenty six Cuban migrants have been apprehended by Defence Force officials this month.

Even with our new RBDF boats and the like, how are all these boats making their way into the mid to north Bahamas without being detected? Imagine how much damage the Dominican and Cuban boats can do with no one watching them - while illegals are making their way north with no resistance. Do we even have borders these days?

Because our new vessels keep getting run aground and are in need of repairs. It's ridiculous!

Ha ha, yes I know that. Just illustrating the point!

When you think that tattered Haitian sailboats moving at 4 knots can "evade" our so-called border security, one can only came to one conclsion -- that we have none.

Perhaps the RBDF resources could be better used to help combat crime in our streets and make themselves useful for a change.

Another mass shooting in the US. This time in South Florida. Sixteen people shot, two dead. Most victims are teenagers who were attending a teen party at Club Blu. One as young as 14 years old believed deceased.