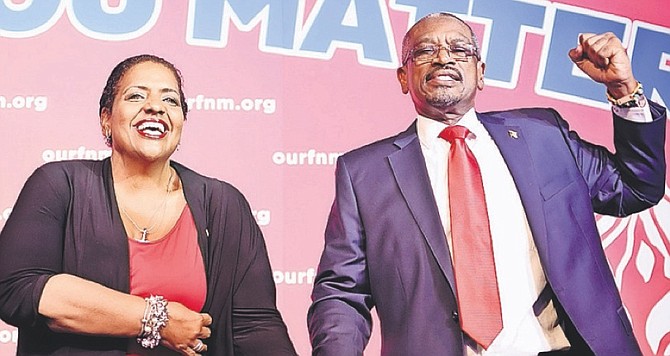 Loretta Butler-Turner and Dr Hubert Minnis on stage at the FNM Convention on Wednesday.

AMID bitter party infighting and accusations that he has not organised a fair convention process, Killarney MP Dr Hubert Minnis last night embraced and danced with his rival Loretta Butler-Turner after promising there will be no “fracture” in the Free National Movement after he wins the leadership contest.

During an energetic and at times passionate speech before FNM delegates at the Melià resort, Dr Minnis said when he “emerges as leader of the FNM on Friday” the party will begin a time of “healing and forgiveness,” adding that he will put aside “animosity” and do what is best for the people of the Bahamas.

And amid speculation that if he retains his post he would punish six FNM MPs who have publicly opposed him, Dr Minnis stressed last night that there will be “no crack, no split” in the party.

In a surprising move near the end of his speech, Dr Minnis called Mrs Butler-Turner onto the convention stage, hugging her and dancing with her as Bob Marley’s “Three Little Birds” played in the background, prompting the crowd to scream and clap wildly.

Addressing delegates and FNM supporters at the first night of the party’s convention, Dr Minnis once again called for unity within the party and urged FNM’s to “come together, with one single voice and fight the PLP.”

At points during his speech, the crowd of hundreds of delegates and supporters waved their red, white and blue pom poms and cheered wildly as Dr Minnis danced across the stage to songs “Jokey Leaders” and “Hit the Road Jack.” The songs played when he took dramatic pauses after lambasting the government on various failures.

Dr Minnis seemed confident that he would once again be elected to lead the party and called for all supporters to “respect” the outcome of the party’s internal vote.

Earlier in the day, Mrs Butler-Tuner was nominated for the post of leader by former Deputy Prime Minister Frank Watson. This comes two years after her failed leadership bid in 2014 against Dr Minnis.

Despite the show of solidarity on the convention stage, Mrs Butler-Turner has publicly stated that she does not believe she will be given a fair chance if Dr Minnis is re-elected as leader and it has been speculated that she will not be ratified as the party’s standard bearer for her consistency.

When asked by the press on Monday about the fate of Mrs Butler-Turner and the five MPs who openly opposed him as leader, Dr Minnis refused to answer.

However, Wednesday night, Dr Minnis said he is willing to put “animosity aside” after the party’s election.

The crowd chanted “Rock wit’ Doc” - Dr Minnis’ campaign slogan - over and over as the Killarney MP declared he will once again emerge as leader of the FNM.

“Democracy demands that we must respect the wishes of the convention as expressed at the ballot box. And on Friday night, when I emerge as leader, we must all put aside animosity and do what is best for the people of The Bahamas,” Dr Minnis said.

“Friday must be a time of healing and forgiveness. We must commence our journey of taking back the government and rescuing the people from this nightmare...Our detractors are betting that on Friday we will end up as a fractured party but I stamp my big foot and say I will not let our detractors get the last word and laugh at our expense.

Dr Minnis also urged FNM members to stop fighting each other and come together to fight the PLP and “rescue Bahamians.”

“If we are angry, let us direct our anger at the great wrong committed by the PLP and not at each other. If we are disappointed and frustrated, let us direct that frustration on focusing on the failures of the PLP. If we must do battle, let us do battle on behalf of the thousands, who cannot find work because of the bad PLP policies. It is time to stop fighting each other. There is more that unites us, than divides us.”

Dr Minnis also recalled a time when he was almost robbed at gunpoint while driving home from the hospital late one night. It was then, Dr Minnis said, he really understood what it was to be afraid and pledged to reduce crime and the fear of crime in the country.

The party will vote on all positions Friday morning and the results will be announced in the final session of the convention on Friday night.

The FNM party was left in a shambles by Ingraham coming out of the last general election which made it easy for the leadership of the party to be hijacked by a power hungry incompetent dingbat like Minnis. LBT and the other aggrieved FNM members of parliament need to accept that the FNM party is no longer a viable enterprise in Bahamian politics. This being the case each of them should make it known that they intend to resign from the FNM party at the appropriate time and run in their current constituency as an independent candidate in the next general election with a view to forming a new political party with other independent candidates who are successful in their bid to get elected. Minnis should be left alone to oversee the funeral and proper burial of the FNM party. Ingraham may see fit to attend the bereavement service for the FNM party given the role he played in its death.

"The party will vote on all positions Friday morning and the results will be announced in the final session of the convention on Friday night."

So we can expect the result to be leaked around lunchtime?

This dancing thing and speeches constantly interrupted by loud music and speakers yelling at the audience is so ghetto!

All this shucking and jiving and stupid loud music gives no stamce on issues and just looks imbecilic and puerile.No confidence here.