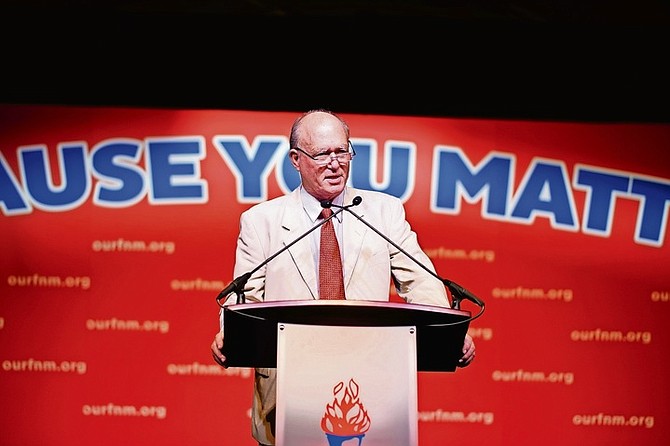 UPDATE: This statement was released by the office of Richard Lightbourn this afternoon, with regards to his comments last night that drew fierce criticism.

“I would like to sincerely apologize to the Bahamian public and women in particular for my comments made last night at the Free National Movement convention.

“It was never my intention to offend anyone but to speak to the need for effective parenting and the support for a strong family structure which will go a long way toward solving many of our country’s social ills.

“It is a woman’s right to decide what to do with her body.

“I received immediate and justified criticism for my comments. It was an extremely poor decision on my part.

“My comments in no way shape or form reflect the position of the FNM.”

MONTAGU MP Richard Lightbourn last night proposed that the country adopt legislation that mandates unwed mothers with more than two children have their “tubes tied” in an effort to curtail the country’s social ills.

In a speech that could barely be heard on the party’s convention floor due to chants of “Roc With Doc”, Mr Lightbourn attempted to layout initiatives he proposed could be implemented as the Free National Movement’s (FNM) crime plan.

To offset that occurrence, the shadow attorney general said: “It is also necessary for us as a nation to consider adopting the lead of several countries in the world which result in unwed mother having her tubes tied after having more than two children, which would in the end result in fewer children being born. The state should not have the burden of paying for the upbringing of children.

“By adopting such measures, there will be less classrooms needed in the future, less out of school every year seeking employment and would also result in the mother of these children being able to live a better life, not having to bring up so many children.”

Moreover, Mr Lightbourn said an FNM government would introduce legislation that would enable a court to deduct from a father’s pay cheque an amount to be paid directly to the mother of children born out of wedlock.

“Many young women have five and six children many of whom are born out of wedlock. Many of the fathers of those children have little involvement in the child’s upbringing either emotional or financial.”

“The laws of our country and the legal system is such the father is not likely to be compelled to assist financially in the upbringing of the child.”

His suggestions drew the ire of many people on social media, with scores of women viewing the comments as offensive and an overreach of government’s legislative powers, while the party moved to distance itself from them.

Later, Mr Lightbourne told The Tribune it had been “a poor statement” from him. “It was intended to state that this was the position adopted by several countries and we as a country need to develop a position to enable the country to address the number of children born to teenage women,” he said in an attempt to clarify his remarks.

FNM Chairman Sidney Collie released a statement saying: “Mr Lightbourn’s comments tonight were personal and do not reflect the position of the FNM. The FNM does not believe in restricting anyone’s rights including women’s reproductive rights. The FNM has and will continue to fight for all Bahamians, regardless of gender.”

The Torchbearers Youth Association also distanced themselves from Mr Lightbourn’s comments, describing them as “not only careless but insensitive”.

Not well thought through by Lightbourn.

May have been better to announce that the government will step up family planning initiatives to educate young unwed women on the importance of birth control and the difficulties in life they can face giving birth to unplanned children.

And yes Bahamas. We do have does kinds of people living here. In time it will tell!

He is also a strong proponent of having the d_i_c_k_s of rapists surgically removed immediately before they are sent to Fox Hill Prison to serve their sentence!

I detect a note of hearty cynicism here.

Children raising children as single parents on limited incomes is a huge problem in the Bahamas, and it is a drag on the entire social fabric. This idea that every child is a gift from god and may grow up to be the prime minister has got to go. There is no social stigma in having a child out of wedlock. And there are no easy answers to solving the problem other than the long term view of education. Social engineering, like China's one child law has unintended consequences, but it did work reducing the explosive and unmanageable population growth.

We really do need to solve the unwed mother problem, and the societal strictures like the churches have proven that they are unable to do so. In the meantime, the baby factories are producing throw-away people that are consigned to poverty, illiteracy, crime and joblessness.

how about eliminating all bankers from the face of the earth... "Genocide (From Greek: Γενοκτονία) is the intentional action to systematically eliminate an ethnic, national, racial, or religious group. The word is a combination of "genos" (race, people) and "cide" (to kill).[1] The United Nations Genocide Convention defines it as "acts committed with intent to destroy, in whole or in part, a national, ethnical, racial or religious group".[2][3]

For Pete's sake, Lightbourn's is only talking about the black mothers in our country. Why are all of the white mother's also getting so upset about his sterilization remark?!

You're a ruthless cynic!

If you're a registered voter or intend to register to vote in the next general election, I respectfully suggest you do like most us will be doing......vote for the independent candidate who will be running in your constituency if you know him or her to be reputable, honest and literate....or not bother to vote at all. That's the sad and harsh reality of the situation those of us fearful of another PLP five year term find ourselves in. Minnis should be left alone to attend to the official bereavement service and burial of the FNM party for all time to come. You need to wrap your head around the fact that the FNM party no longer exists....and that is rightfully the legacy of one Hubert Alexander Ingraham, more affectionately known as "Hubiggity'. For decades we, the Bahamian people, have been played as fools by Ingraham and Christie alike....taking our country to the very brink of financial ruination!

Well. Lightbourn is a moron and a nazi....

If they had sterilized his mother, then he wouldn't be making those comments today..go figure!

I am simply appalled that Mr. Lightbourn, for whom I have always had the utmost respect, would think it is ok to say something so stupid. I hope after the next election we never hear from him again. Of course his racism is now on full display. Educating young women, and men, is the answer Mr. Lightbourn.

I am not at all surprised at this racist lunatic statements any more than I am surprised of white Bahamians constant berating President Obama, despite his saving America from the worst recession in living memory, enormous, undeniable, recorded accomplishments and official recognition as one of the most consequential presidents in American history!

Lightbourn and his white Bahamian brothers have nothing but pure disdain for black Bahamians, but have no problem with uncle tom, ass kissing, Haitians who "yes boss" and flash all 32 teeth at them all day!

Everybody know Haitians breed like rabbits, not Bahamians! How many times has it been said Bahamians are out numbered 6 to 1 in PMH maternity ward?

NEVER have we heard a white Bahamian complain about the Haitian infestation!

My personal experience with Lightbouns slave master mentality grouping is most white Bahamians will not do business with black Bahamians with enough sense and backbone to look them in the eye and refuse to suck up, bow and kiss their backsides.

NEWS FLASH ....UBP days are GONE for black Bahamians and will NEVER return!

Richard Lightbourn's apology is totally politically motivated and means NOTHING to anyone with an ounce of gray matter between their ears.

He said what is in his heart based on common consensus of majority of people of his hue.

Sterilize biggity black Bahamians and flood the country with grinning, kiss ass Haitian slaves. That's what "they" want and that is exactly what "they" have done.

The proof is literally all around us!

Dilly tree- If you cant care for and raise a child DONT HAVE ONE! Herevis entitlement at work, wht thevhell should I a taxpayer help raise your child? Keep your legs closed if you cant raise a child, its the biggest responsibility in the world. SP-at least in the days ofcthe UBP the treasury had money, the country was working, the education system was working then along came majority rule. Look at the history, look at statitics, look at the numbers. My friend this country been going downhill since. TRUTH HURTS. I raised 3 children with hard work and help from a wife, not once did any of them have to face a judge. Bahamian s have to wake and realize they have been taken advantage of for 43 Years. God helpvus if they strike oilnin our waters. Nigeria here we come.