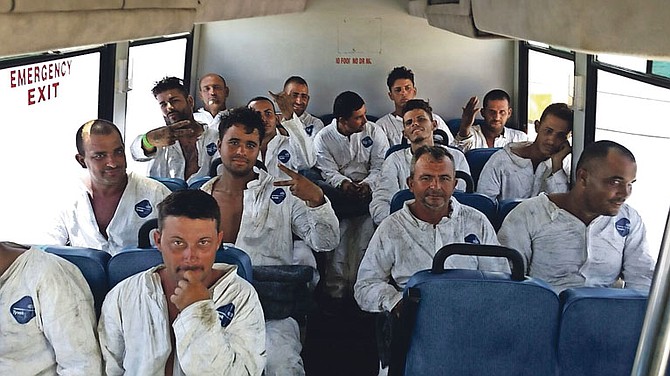 The Cuban immigrants under arrest in Grand Bahama.

THE WAVE of Cuban migrants through the Bahamas continues to flow as another group was apprehended and brought to Grand Bahama on Thursday.

This puts the number of Cubans at 115 processed at the Department of Immigration in Freeport since the beginning of from May.

Immigration officer Napthali Cooper reported that, on Tuesday, the US Coast Guard Cutter Margaret Norville arrived at Lucayan Harbour with 11 Cubans who were spotted in a rustic vessel in the Cay Sal Bank area.

The migrants told Bahamian Immigration authorities that they left Cuba and were heading to Florida. They were flown to New Providence, where are detained at the Detention Centre to await repatriation.

The Cay Sal Bank is a common route used by Cubans on their illegal journey to the United States. The Coast Guards have made most of their interceptions at Cay Sal, and have even rescued migrants who were stranded at the uninhabited cays there.

According to reports, on May 31 some 18 Cubans were spotted on a cay in the Cay Sal Bank. The group had left Caibarien, Cuba, on May 22 and were at sea for three days when they ran out of food and water and took refuge.

The group was spotted by the US Coast Guard and picked up. It has been discovered that some of migrants have been previously interdicted in the Bahamas and repatriated.

Why are these jumpers so dirty?