INSIGHT: Public consultation key to the success of Freedom of Information reform 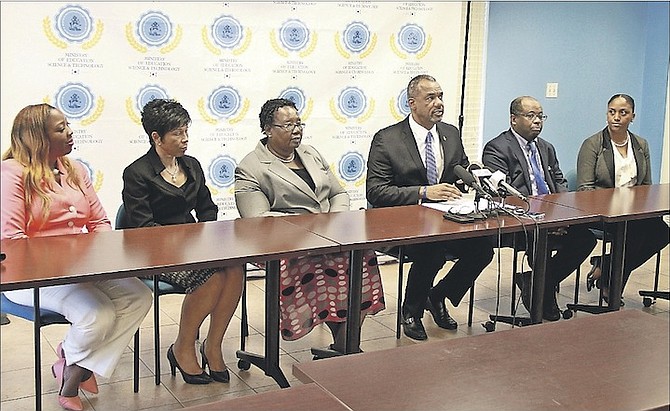 Minister of Education Jerome Fitzgerald at the press conference in April to announce the launch of town hall meetings to discuss the Freedom of Information Act. He is pictured with, from left, Shantel Taylor, Fern Bowleg, Janice Knowles, Shane Miller and Shari Moxey. Photo: Tim Clarke/Tribune Staff

DURING Minister of Education Jerome Fitzgerald’s comments on May 4 in Parliament, he spoke to the need for greater public consultation on the proposed Freedom of information Act (FOIA) 2015.

He referenced that there would be public consultative meetings on the revised bill over the following six weeks and that the bill and other pertinent information was available on the Ministry of Education, Science and Technology’s (MOEST) website and Facebook page.

While the Organization for Responsible Governance (ORG) applauds the MOEST and the Minister for their initiative on this matter, there was little sign of a schedule of upcoming meetings on either the MOEST website or Facebook page nor a copy of the draft bill available to the public on the Ministry’s website until recently. Further, notices on one MOEST website asks citizens to send their comments or questions on the proposed FOIA draft to a MOEST email and/or a call-in number.

Sadly, in at least three cases, the ORG had been unable to obtain a reply after submitting such enquiries. Additionally, calls made by the ORG to the listed phone number have gone to a generic voice mail and have not been returned.

The ORG implores the Ministry of Education and the Attorney General’s Office to ensure that the necessary revised draft FOIA legislation is provided to the public in advance of a suitable number of scheduled public education and consultation town hall meetings, to be held around the country as the deadline for submissions is the end of this month.

Tonight, the final meeting for the capital will be held at the Church of God of Prophecy, East Street at 7.30pm and there are scheduled meetings at the Exuma Foundation, Georgetown, Exuma, tomorrow and on June 30 at Governors’ Harbour Primary School, Eleuthera.

A strong Freedom of Information Act will have long-reaching implications to the future of our nation, similar to those of the Gender Equality Referendum. Freedom of information is the first critical step to the correction of a massive number of serious government ailments that are undermining the stability of the Bahamian government and The Bahamas. Both the public perception and/or reality of government corruption, cronyism, nepotism or extortion are significant problems for the socio-economic wellbeing of the Bahamas, and these ills will only be combated by the enactment of a highly respected and effective freedom of information act.

The ORG has assembled a committee of local and international experts who will compare and contrast the Bahamas FOIA legislation, when released, with a number of other highly respected acts as recognised by the Centre for Law and Democracy’s Right to Information Rating as seen at http://www.rti-rating.org/.

We must ensure that the Bahamas Freedom of Information Act draws from international best practices and relevant benchmarks. An example would be India, which has legislation that is written in English; is no.3 on the Right To Information Rating; and as a Commonwealth nation, shares a similar legislative system. ORG’s committee remains ready and willing to work with the Government’s appointed FOIA committee to integrate these practices into their proposed legislation to ensure the strongest FOIA legislation possible for The Bahamas.

There are a number of issues in the 2015 Proposed Bill which should draw the concern of the Bahamian public. For example, the 2015 draft gives the Minister of Information overwhelming power to withhold information from the public as well as stipulates that the “Independent” Information Officer be selected by the Prime Minister. In ORG’s opinion, and that of our experts, this is most assuredly a case of the fox guarding the hen house and is unacceptable. This is why public input from citizens, local experts and civil society organizations, like ORG is essential.

However, it is impossible for there to be any meaningful civil society consultation without the issuance of the revised FOIA draft or some reference material. There must be sufficient time for any number of civil society organisations to digest the revisions and properly compare and contrast the draft against other highly respected FOIAs and then to formulate a meaningful response to the Government.

In his comments to Parliment, Mr Fitzgerald noted: “This bill is for the people and therefore the people must have a forum by which to voice their concerns and give their feedback and comments.” The irony is that there seems to be no transparency surrounding the very act that is to provide government transparency.

The Ministry of Education must be aware of its failure to achieve the required consultative objectives as only 15 people attended its public consultative meeting in Nassau in mid-April and only four attended the Grand Bahama meeting the following week.

FOIA has generated a tremendous amount of social media chatter over the last seven months indicating that the poor attendance being attained at the MOEST public meetings is due to poor scheduling and inadequate marketing of the meetings.

To facilitate greater public education and participation, ORG, Citizens for a Better Bahamas, The Bahamas Chamber of Commerce, The Nassau Institute, The Bahamas Bar Association, We the People, HeadKnowles and Save The Bays, partnered to arrange a Public Education Forum on May 10. There the public could learn about the importance of freedom of information, the government’s proposed legislation as well as express their opinion. Over 100 people attended.

Once Bahamians make their concerns known, the government must abide by the public’s stated wishes and demonstrate a commitment to transparency and the rule of law, both cornerstones of good governance.

FOIA’s success is highly dependent on an Independent Information Officer and Regulatory Body free of government influence (except on matters of National Security), and freedom of the press and free speech free of political victimisation or government reprisal. The media and press are heavily encouraged to take a proactive role in ensuring that these pillars of freedom and democracy are upheld no matter the cost. Knowledge is power.

Matthew Aubry is the executive director for the Organization for