‘No Chance’ For Butler-Turner And Sands Leadership Challenge 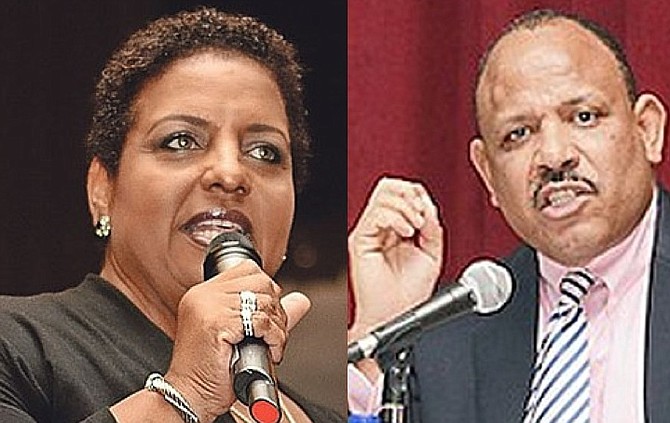 In an interview with The Tribune, Mr Wells was adamant that the “tactical, smooth and politically savvy” Dr Minnis and Mr Turnquest had the support of the majority of the FNM’s delegates now as they had back in 2014 when they won their respective races.

At the time, the delegates elected Dr Minnis as leader of the party for a second time. On Sunday, Dr Sands announced that he and Mrs Butler-Turner are running as a team for the posts of deputy leader and leader, respectively.

Mr Wells, who resigned from the FNM in 1999 and became an independent candidate, defended Dr Minnis as party leader saying despite criticism that he is not an eloquent speaker, he maintained a record of success in his personal life and professional career. He said Dr Minnis was a true success story and possessed what was needed to unify what appeared to be a fractured party.

“I don’t think they stand a chance,” Mr Wells said yesterday when contacted by The Tribune.

“When he (Dr Minnis) went to the convention the last time he probably had 50 or just over 60 per cent of the council support.

“And all the media and many of the former leaders of the FNM and a couple of the oligarchic group of the FNM who believe they should control the party forever, they supported Loretta and Sands. But you see what happened, they lost. The delegates said no.”

He added: “Many of the people who were supporting Loretta and Sands them back then, they don’t support them now. So for this reason I don’t think they stand a chance, not one.”

On Monday, Dr Minnis said he had no doubt that he will emerge as leader after the July convention.

He told reporters on Monday that he had no concerns about a leadership challenge from his party’s former deputy leader, Mrs Butler-Turner.

Earlier, while making his contribution to the 2016/2017 budget debate, Dr Minnis was resolute as he addressed issues within his party, saying: “We are now preparing for a convention and I will enter as leader and I will emerge as leader of the Free National Movement.

“As I look at their faces (government MPs) I can see their grimaces. I know, Mr Speaker, they are prepared to ‘roc with doc.’

“The 5,000 plus children that I have delivered into this world who are now able to vote will ‘roc with the doc,’” he said, referring to his time as an OB/GYN. “I say to them, Mr Speaker, I delivered (you) safely into this world and it is now time to deliver me and the FNM.”

He added: “Speaker, I thank the almighty God for giving me the fortitude to persist in my duty in the face of a firestorm of criticism from within and without.”

Later responding to a question from The Tribune about the leadership race, the embattled party leader said he believed in democracy. He said the party’s delegates would remember him as a leader with concrete plans and elect him as their leader once more.

Mrs Butler-Turner and Dr Sands vied for the posts of leader and deputy leader respectively at the FNM’s convention in 2014 and lost their bids. However, they were not running as a team at the time.

Man please stop getting this man's input. He is not FNM.

That's sad because the FNM “don’t stand a chance” against the PLP if Minnis is the Leader.

Time to seriously move away from the old tried but not true leadership we seems afflicted with, from Pindling to Ingraham to Christie, and these two wanna-be's. David cameron does the honorable thing when losing the British referendum, Christie has no honor or clue, Ingraham sulked away twice on losing two elections, These two represent the existing mindset, seem intent on spreading dissent for their own aims, and those of the existing special interests, in the face of serious long standing failures by all parties.

Comrade The-Oracle, a small group I meet with have over the past 12 months, talked much about moving away from the old political nests. It will require a generation of voters who are detached from the psychological need to belong a political party. The success of the British "BREXIT " NO Vote was not lead by the two main political parties.

Maybe Tenny knows what he is saying .......... he maybe bank-rolling the FNM delegates as well

He's right. Dr Sands should have stayed away from the link. But I suppose he doesn't have the popular support "yet", to make it on his own.

The PLP (and FNM turncoats like Tenny) do want Minnis to remain as FNM leader ........... but if Minnis wins the FNM convention vote, the 6 member faction against him must be prepared to step out, break with the FNM (like the Dissident 8) and appoint a leader and gain control of the Opposition in the House and PROVE to the country that Minnis is in collusion with the PLP for obvious power-sharing reasons .............. and then they must create a viable Third Party Force with the DNA and UDP to challenge the PLP and the FNM ......... the United National Movement ....... we are in dangerous times in this country with Perry and Minnis as possible 2017 PM candidates

Then a new fight will emerge. . .BM, AR, LBT, HC, Moss and ML all popping each other heads in public for the leadership. . .with the election less than a year away!! Too many "super sized" egos to ever get any sense out of that mix. . .GOOD LUCK WITH THAT!!

This man flips and flops from party to party depending upon which way the wind blows. How you can waste ink and space on his comments is beyond those of us who have a brain and the ability to recall and to think!!