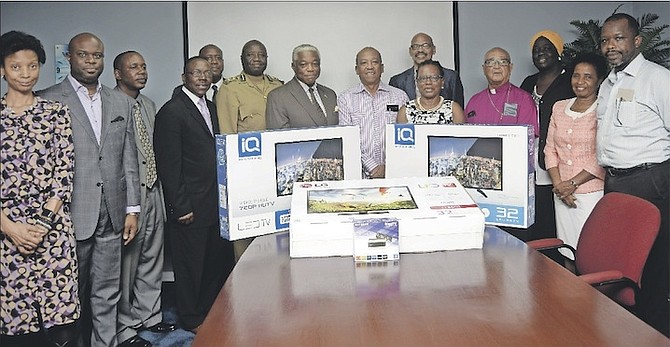 The presentation of three television sets to the Bahamas Department of Correctional Services yesterday.

The 32-inch HDTVs were donated by Bahamas Faith Ministries International (BFM), The Assemblies of God, and the Bahamas Chamber of Commerce and Employers Confederation (BCCEC) and its member Furniture Plus, according to PRSC deputy Chairman Rev Dr Patrick Paul.

Other participants in the initiative include the Bahamas Telecommunications Company (BTC) as well as The College of The Bahamas (COB), according to officials.

At a press conference at The Assemblies of God headquarters on Warrick Street, Rev Paul said the donation is in line with the PRSC’s mandate to establish a Bahamian parole framework for inmates.

“A major part of rehabilitation is the development of social skills, understanding and connectivity to the world in which we all have to live peacefully,” he said. “We believe that access to television is a tool that can be used to greatly enhance this form of social development.”

BFM Senior Pastor Dave Burrows said the donation is key to reducing recidivism, adding, “Everyone who is in prison, except for a few persons, will eventually come out of prison.”

“...As a part of the educational process, as a part of the commitment to technology, we are pleased to make this small contribution that we believe will enhance the experience of the inmates and would allow them to be better prepared to make a contribution once they return to society,” he added.

Edison Sumner, BCCEC chief executive, said of the donation: “We see that it’s necessary for persons who are at the Bahamas Corrections Department to also have access to entertainment. We believe that having some exposure to social life, even while they’re there, aids in the recovery efforts we believe, it reduces the level of stress because people now have an opportunity to be entertained, and one of the media for doing that is certainly through television.”

Patrick Wright, BDCS commissioner, expressed his gratitude for the donations, which he said will go a long way towards reducing offender recidivism in the country.

“Without community participation, (the BDCS) will only be a lock-down, punitive institution,” he said. “I don’t care what name you give it. If the community is not involved in incarceration, all you have is warehousing young men and young women who are going to look at the public in a different light and believe that you owe them something and they are going to collect that when they are discharged.”

The PRSC is a government appointed committee tasked with proposing a policy framework for a parole system and interventions for the seamless reintegration of past offenders into Bahamian society.