Pilot Killed In Bimini Crash Had No Licence 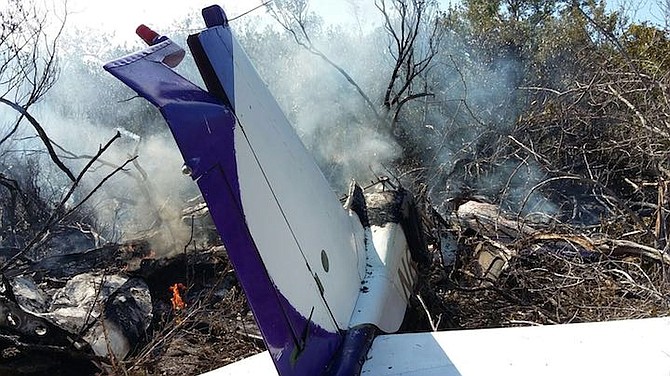 AN official at the Department of Civil Aviation has defended the agency’s practices after it was revealed that the pilot who died in a crash in Bimini last week was not licensed, telling The Tribune it was the pilot’s responsibility to ensure he had the needed documentation.

Airplane mechanic, Anthony Smith, nicknamed “Scrubby”, was also on the plane and died in the crash.

The Tribune understands Gibson was incarcerated and released from prison six months ago, which may be the reason his license was not renewed.

This comes a day after Civil Aviation Department lead investigator Delvin Major told The Nassau Guardian that Gibson’s license was revoked in 2001 and that the deceased was en route to Abaco to charter a flight before he died.

“We don’t understand why he would not have gotten a new licence,” Keith Major said yesterday. “Anyone flying an aircraft needs one, it’s like a driver’s licence. If it expires and you say nothing about it, we would not know that it has expired.”

“You have a responsibly to ensure it is current, no one ever knows your driver’s licence is expired unless you get into an accident or get pulled over and similarly we will not know if your pilot’s licence expired until you come to us.

“We do not go on planes and check every license, that is not required anywhere in the world. We ensure that persons flying are qualified, you need to be responsible, you need to renew it. Now if we have knowledge of it we will check.”

The acting director also said the accident report is not complete and investigators at this point are not sure if the plane was being tested or if it was en route to pick up passengers.

“We have no information that he was picking up passengers, the investigation is ongoing and being actively conducted,” Keith Major said.

“I don’t know the status of the plane, I don’t know of any charter flight, once we have all the information about the accident it will be released.”

On Monday, an official revealed to The Tribune that the crash that killed the two men was caused when the pilot lost control of the aircraft while attempting to avoid hitting another plane that was taxiing on the runway.

Delvin Major told The Tribune that based on the department’s investigations, the Piper Aztec 27 did not crash because of engine failure, as was originally reported, but rather was caused “after the pilot turned too deep and as was unable to come out of a nose dive.”

Last Monday, Transport and Aviation Minister Glenys Hanna Martin said the small plane crash at the South Bimini Airport was likely to have been caused by engine failure.

However, Keith Major said yesterday the minister was not given the “additional information” on the crash and reported to the media what she was told by investigators.

When contacted yesterday for comment, Mrs Hanna Martin said she will issue a statement along with recommendations after the accident report is completed, which should be in a week’s time.

A witness to the crash who wished to remain anonymous said he saw the plane take a nosedive and was not able to “pull out of it” after swerving to avoid hitting the plane on the runway.

“They took off and then came back around dropping low to the runway but another plane was on the runway and the pilot panicked,” the witness said on Monday.

“The plane took a 40 degree turn, which is too much for an Aztec and so the plane stalled and went into a nosedive. I saw the plane: it was a Cherokee 6 and I don’t think the guys on the plane had a headset and they were not able to communicate.”

At 4.15pm on June 19, aviation officials at South Bimini Airport received a report of smoke in bushes near the airport. Officials previously reported that the crashed plane had departed Bimini’s airport minutes before the tragedy.

Old news??? After 2001, this statement from civil aviation should knock everyone out of their chairs. I wonder if the US would be interested in knowing that we have unlicensed pilots flying unchecked 10 mins from any major airport in Florida. Does anyone believe that in the US an airport within miles of Washington could so casually be dismissed as "uncontrolled"? Five years??? Seriously? Drug trafficking, human smuggling, terrorism and we can casually dismiss airports within miles of the capital?

U.S. needs to be much more concerned about the many hundreds of pilots in Florida who are flying each day without a current or valid pilot's license.

It is true that there are next to no checks or safeguards in that respect...just like anybody can hop in a car and drive it off without a license or insurance, so can someone in a plane, only difference is you are likely to kill yourself and others faster in the plane if you are not qualified or trained properly. At least it appears that this guy did at one point hold a valid license so did have some training. Still, I can almost guarantee that if a sweep was done of every single aircraft flying in Bahamian skies, you would find a good number of 'pilots' without the proper qualifications to fly the aircraft they are in.