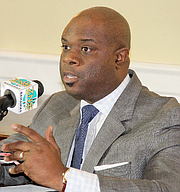 The Bahamas Chamber of Commerce (BCCEC) warned yesterday that any Government move to force businesses to reduce prices in line with import duty cuts would be akin to “economic dictatorship” and “Gestapo tactics”.

Edison Sumner, the BCCEC’s chief executive, told Tribune Business that the proposals being floated by the Price Control Commission would, if passed, place the Government in charge of running private sector businesses.

Reiterating that proper competition and market forces, rather than Government regulation, was the best defence against price gouging and unscrupulous merchants, Mr Sumner said numerous factors - other than taxes and import duties - helped determine consumer prices.

And, with the private sector now responsible for administering and collecting Value-Added Tax (VAT), the Chamber chief executive said a “quid pro quo” between itself and the Government was a fair, just arrangement.

He was speaking after the Chamber yesterday released its official response to suggestions by E. J. Bowe, the Price Control Commission’s chairman, that the Government would amend the Price Control Act to force merchants to fully pass on import duty reductions/eliminations to consumers in the form of lower prices.

The BCCEC pointed out, though, that import duties were not the sole determinant of merchant and business pricing.

Apart from having to add VAT to consumer prices from New Year’s Day 2015, the private sector was also having to intend with constant increases in the Bahamas’ cost of doing business, plus rising commodity prices worldwide.

As a result, Bahamian entrepreneurs and business owners were constantly having to adjust prices and margins to achieve what they were in business for - to make a profit.

Acknowledging that price controls were intended to ensure essential goods and services remained affordable for the poorest Bahamians, the Chamber suggested that such regulation was a blunt instrument, and not the best for achieving the Government’s objectives.

“Competition and a free market economy lead to efficiencies and keep prices down, while improving the level and value of service in the country,” the BCCEC statement said.

“Allowing healthy competition in the marketplace will prove more effective in controlling prices of goods and services, more so than a more onerous price control regime, which in itself is intrusive and bordering on economic dictatorship.”

These sentiments were echoed by Mr Sumner himself, who told Tribune Business of Mr Bowe’s thoughts: “It comes down to economic dictatorship, it comes down to Gestapo tactics.

Mr Bowe, in an interview with Tribune Business on Monday, indicated that the idea of forcing price reductions through legislation was borne out of the Price Control Commission’s frustration with Bahamian businesses.

Indicating that his patience was wearing thin, Mr Bowe said merchants had largely failed to respond to two years of pleading by himself to reduce prices in line with relevant import duty cuts, thereby passing on the savings to consumers.

Still, Mr Bowe said there was “nothing on the drawing board right now” in terms of amendments to the Price Control Act, implying that the idea is currently more of a concept as opposed to something that has gained traction and support within the Christie administration.

“While we understand the Government feels the need to keep price controls in certain areas,” he told Tribune Business, “we feel that with the proper introduction of competitive instincts in the way we do business, and allowing free markets to take their course, that will be much more detrimental to price gougers and companies that price themselves out of the market.”

Echoing the Chamber’s statement, Mr Sumner said increases in the costs of doing business, such as labour and utilities, plus rising global commodities prices, had to be factored in when assessing consumer prices.

“Many businesses are already operating on slim margins,” he told Tribune Business. “Where they see opportunities to increase their margins, but keep prices affordable, that is a situation we see as better for everyone.

“We prefer free competition and markets, rather than putting the kind of restrictive and regimental price control regime in place that may hamper business and growth more than anything else.”

With private sector activity responsible for generating VAT and the Government’s other taxes, Mr Sumner said it “plays a tremendously significant role in the buoyancy of the economy”.

“We think any reasonable quid pro quo is for the Government and its agencies to work with the private sector to get a more efficient system by collaborating, rather than both sides having an adversarial approach,” Mr Sumner told Tribune Business.

He reiterated that the Chamber was willing to discuss the issue with both the Price Control Commission and the Consumer Protection Agency, which is headed by Senator Jerome Gomez.

The Chamber’s statement yesterday warned that “further complexity and rules” relating to price control, and business enforcement and compliance, will only increase private sector costs and impediments to the ‘ease of doing business’.

“Accordingly, the BCCEC does not support any amendments to the Price Control Act meant to force businesses to lower the cost of goods due to a lowering or elimination in customs duty,” the Chamber said.

“Perhaps more emphasis should be placed on determining ways to improve the ease of doing business in the Bahamas, which can also lead to lower costs of goods and services.”

well the vat was simply added on to the original price, the price control commission could not possibly want the merchant to pay the vat for the consumer.

lets do an example with clothing.

the merchant now profits only $8.60, the govt which collected $7 previously now collects $8.24.

Then this man goes around saying the merchant did not pass on savings to the consumer.

the only one making more money is the government. And they love the couriers because they collect even more that way when the consumer pays the duty and vat on already higher prices.

You have an error in how you calculate the business costs in the After VAT example.

So the cost of good actually got lower and the revenues to both the business and government went down. If the price is still the same, then in this example, the store is actually using a higher markup.

thanks, I see that.

however, the 33% markup is usually what the merchants call 'net items'-- they do not go on sale when they have christmas and mothers day promotion, for example.

Regardlesss, experienced merchants know the limits of their markups-- the point at which the majority of customers start shipping their items.

I no longer 'go away to shop' because amazon gets me what is not in the shops and i consider the cost of transportation and hotels, so the savings slips away.

Price control is unnecessary and has never worked. Only exists to employ a few more government workers. Delete it completely