Mitchell Asks For Patience Ahead Of More Passport Office Delays 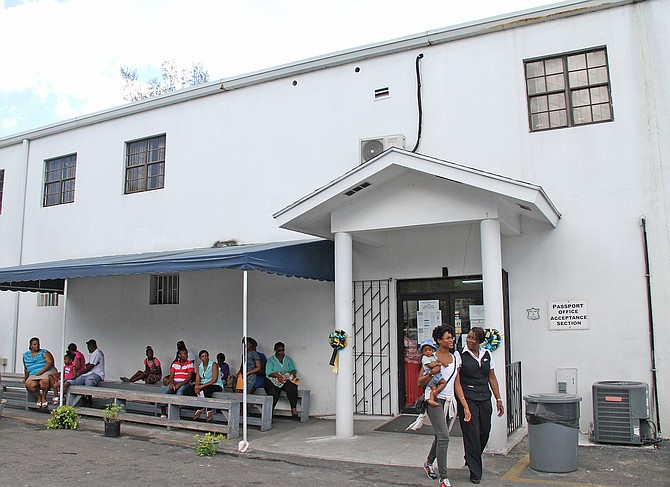 FOREIGN Affairs and Immigration Minister Fred Mitchell said yesterday that the Passport Office is experiencing the “summer from hell” as he announced delays of more than 12 weeks for e-passports.

Speaking to reporters at the Ministry of Foreign Affairs on West Bay Street, Mr Mitchell said the Passport Office has been plagued with a series of issues including power failure, air conditioning failure and equipment breakdowns.

Mr Mitchell said even if the public pays the $200 for expedited passports, there is no guarantee the documents will be ready on the specified date.

He pleaded for “patience” as the government attempts to fix the outstanding issues at the department.

“There is a significant backlog in passports,” he said. “The Passport Office is in the middle of a perfect storm, 12 weeks is about what is on average to be the expected wait time now. You can pay the express fee but even with the express service we have had a number of events last week, power failed, generator failed, wiring was deficient and now we have an air conditioning unit that broke down and so it is a cascading set of problems. The best I can do at the moment is to urge maximum patience,” Mr Mitchell said.

“This is yet again a summer of hell when it comes to passports. We are trying our best to manage the issue.”

Mr Mitchell said his office is in the process of locating another site for passport collection, in hopes that it will eliminate some of the wait at the current Thompson Boulevard location.

“This will allow people to collect somewhere else because the lines you see are mostly due to collection issues and not an application issue. I think it is necessary to say that we need the public to be sensitive to the issues. It is really not a good experience for anyone,” Mr Mitchell said.

“The staff is working under conditions which are not acceptable but we are trying to make sure the passports get out. This is an ongoing issue but we are trying our best to get out all the passports for emergency situations. Certainly if someone has had a long wait, where you put in your passport in say March and you show up for your due date and they tell you cannot collect, the staff will make an effort to get the passport to get it out to you that day or within 48 hours without paying the express fee.”

Following the disappearance of some $25,000 last year at the Freeport Passport Office and the firing of an employee, the minister talked about looking into having a cashless system implemented.

When asked about this in an earlier interview on Tuesday, Mr Mitchell indicated that it is something he still supports, but that the Ministry of Finance has to make that decision.

“Discussions are ongoing at the moment and it is up to, ultimately, the Ministry of Finance because the Treasury is the one that controls payments. And I am certainly hoping that within the next three to six months that system here is to avoid all cash payments and stop any corruption issues – that is very important,” he told The Tribune on Tuesday.

Last year, the Ministry of Foreign Affairs implemented a new $200 fee for people who require passports within 48 hours on an emergency basis.

The announcement came as the Passport Office continued to grapple with a backlog of 6,500 applications.

The regular fee for passport renewal is $50.

Last year, a $200 charge in addition to the cost of the passport for anyone who has lost two passports or more within a 12-month period was implemented. This fee is not payable where there is a medical emergency.

Fweddy, it's not the summer from hell that's causing these delays, it's the government from hell that is to blame... for failing to plan for a summer - a regular summer. Don't pretend a power failure is a surprise to anyone in this country.

When Fweddy is criticised, he goes batshit crazy, but when he's got to explain why his ministry is performing so poorly, he's got lots of excuses. This isn't an old issue, but it's being used as an excuse for far too long.

If it's the equipment, what can't we get new equipment? The government seems to have enough money to waste on Carnival and other stupidity.

For goodness sakes, Fweddy, get your act together and do something useful for a change.

Fweddy is never here to oversee his ministry! It is slackness pure and simple. If you or I tief 25k we go to jail but when a crony does the get fired and keep the 25k. Go figure.

so this the same as last summer and the summer before and before...

Fred don't know how to manage shit. When I lived in fox hill and He act like emperor but cant control or manage a bag of onions. All he could do is talk and cry like an old bitch when he gets called out.

Fox hill need to do the country a favor and grace and vote his nasty ass out!

Always something --- bunch a useless ---

This backlog was going on long before summer. People who put in for passports in November got them in March! How is that possible? And no one EVER answers the phone or if they do they transfer you to another ringing line! Public service in the Bahamas. Boy I tell ya!