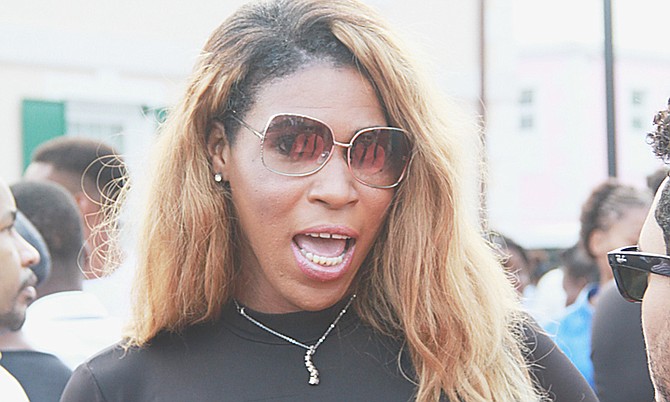 Torri Culmer, a transgender woman, said the bills, specifically bill four, will help the LGBT community. The government intends to eliminate discrimination based on sex from the Constitution by inserting the word “sex” into Article 26. According to bill four, “sex” will be defined as “male or female”.

Some have argued that this could lead to gay marriage; however government officials and the Constitutional Commission have said this concern is unwarranted.

“As a transgender in the community, I feel like I have to stand up for my rights and this is a perfect bill for representing the transgender and the LGBT community in the Bahamas,” she told reporters in Rawson Square as the House of Assembly was voting on the bills.

“As far as my status as a trans woman, we are stuck in kind of the middle because I believe that I am a woman but the community at large still sees us as male, so if we go on a job or something you get discriminated against.

“It’s hard to get the opportunity we need as trans women. This amendment four, giving rights to sex, is perfect for transgender community.”

When pressed on why she felt this way considering the government has said this bill is not linked to LGBT issues, she said: “It doesn’t recognise transgendered people but it recognises sex. When you’re on that bottom line between both, male and female, it is generalised to everybody, giving everybody the right to have the opportunity they deserve. This bill is giving equality to all.”

Father James Palacious, vice-president of the Bahamas Christian Council (BCC), disputed Ms Culmer’s characterisation of the impact of bill four on her community when he spoke to The Tribune in Rawson Square.

He said the Constitutional Commission told the BCC during one of several recent meetings that the amendments would make it harder for the LGBT community as it relates to same sex marriage.

“The Christian Council,” he said, “had two or three extensive meetings with the Prime Minister, one just this Monday. Many of the pastors are in full support of the bills. More of the people who might have had some reluctance to vote for it are for it now.

“No one has same sex marriage in mind. In fact, what the Constitutional Commission said very emphatically on Monday is that to leave things as they are would open the possibility of having the same sex marriage much more so than if you define sex right now as male or female.”

Don't the LBGT community realize that every time they show up, speak up or demonstrate it makes people more suspicious of Bill #4? While people have a right to voice their opinion, the LGBT community is killing it every time they speak. In my opinion they need to shut up especially Erin Green!

I WILL VOTE FOR ALL THE BILS. . .BUT THEY NEED TO STOP "BULLSCATING" THE PEOPLE AND SAYING #4 WILL NOT HAVE ANYTHING WITH SAME SEXED MARRIAGE. Every country where same sexed marriage is allowed. . .their Court ruled based on the word SEX!!