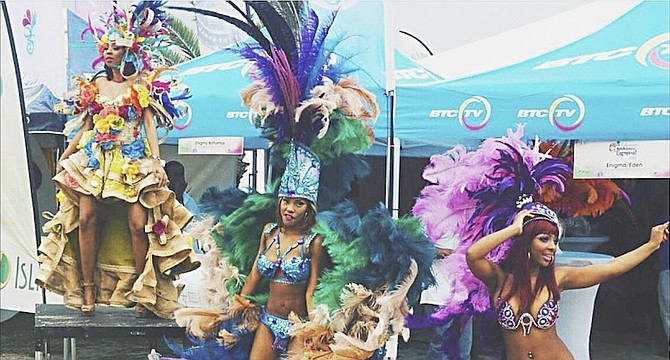 Carnival costumes on show at the launch of this year’s event countdown on Sunday. Photo: Allan Jones

THE budget for this year’s Bahamas Junkanoo Carnival has been cut by more than $8m and will likely be “around $3m,” Tourism Minister Obie Wilchcombe said yesterday.

However, Mr Wilchcombe told The Tribune that the “work on the final number is still being done”.

Mr Wilchcombe said the Bahamas National Festival Commission (BNFC) will be responsible for “raising” the additional money needed for the anticipated event and getting sponsorship.

When contacted, BNFC Chairman Paul Major said the group is “working on getting sponsors” but declined to say how much additional money will be needed to pull off the event.

The government had budgeted $9m for its inaugural Junkanoo Carnival, but because of cost overruns, the festival’s cost ballooned to $11.3m.

The government reaped $8.3m in combined direct and tax revenues, with the latter providing $6.7m of that sum.

It is still unclear which entertainer, if any, will headline the festival’s main concert. Last year, the government received heavy criticism for failing to secure a headliner well in advance of the festival before ultimately deciding on Trinidadian soca singer Machel Montano.

Last Wednesday, Mr Wilchcombe said his ministry has the support of the cruise lines to provide visitors for this year’s Junkanoo Carnival, adding that the event must go global.

“We want to create an atmosphere where carnival is seen as a season, not an event. We want to make sure that people get a taste of our culture. As I have said before, I want to see more Junkanoo, more Bahamians involved, ensure that the entertainers are properly utilised, and it has to be an event that goes global.”


Bahamas Junkanoo Carnival organisers said last week that a more “focused” approach has been taken to marketing this year’s event.

Junkanoo Carnival will take place on May 5-7 in New Providence, with a kick-off event from April 15-16 in Grand Bahama.

what a picture.... looks like some hookers in some God forgotten place down South.

They were the only people there. Nobody showed up. I'm wondering what kind of signal that is if nobody shows up to your launch event..is that disinterest or opposition?

Comrades please I need you know I did not just make the words up in my head. These are their words, not mine. While tempted to offer commentary to these two man's words that would best describe my reaction, I shall resist the temptation to use some juicy words of my own, cause I refuse to post nasty grammar expletives.
Paul Major said: "We hope to bring some economic relief to those who have labored long and hard in Junkanoo and other forms of culture and yet have little to show for it materially. In Trinidad, there are multiple millionaires from Carnival. I do not know millionaires from Junkanoo, but with Carnival 2015, there will be thousands of people buying thousands costumes and putting thousands Bahamians to work."
PM Christie wanted to remind Bahamalander's that "Most other tourist destinations are using culture to catapult them ahead in a very competitive environment, Sun, Sand and Sea has become old. We need something that sets us apart and I think we are well on our way to making that happen."

Comrades Did the nation's PM spend $13 million taxpayers money's to replaced we Sun, Sand & Sea with this vulgarity?