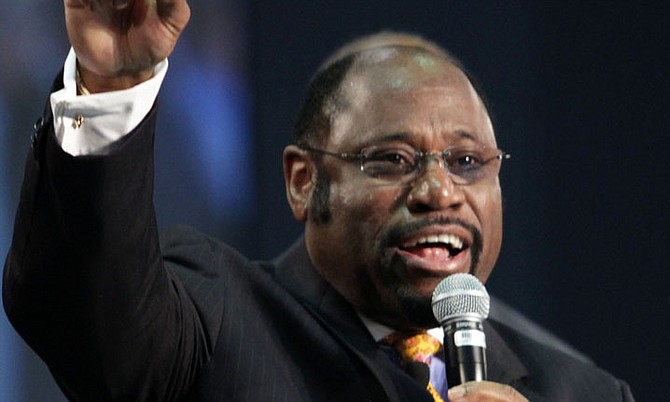 THE estate of Dr Myles Munroe, Bahamas Faith Ministries founder, yesterday released the contents of two detailed proposals made by the late pastor to the Constitutional Commission in early 2013 and the summer of 2014, in which he supported the need for constitutional reform and gender equality.

Dr Munroe’s estate lauded the position taken by the pastor on the matters, maintaining that up until his death Dr Munroe pushed for the wording of the four Constitutional Amendment Bills to be addressed and subsequently brought to a vote.

The estate noted that Dr Munroe was invigorated by the process and motivated to prepare a substantial presentation to the Constitutional Commission on a number of areas of national importance.

In regard to the recommendations put forward by the late pastor and his legal team, Dr Munroe called for all gender-based bias to be removed from the Constitution.

He indicated that the principle of equality among the sexes upheld the tenants of the spiritual values implied in the preamble to the Constitution.

When the proposed questions were first released, there was particular concern about bill four. This bill aims to remove discrimination from the Constitution based on sex by inserting the word “sex” into Article 26. However, some critics feel this would lead to gay marriage.

However, Dr Munroe petitioned the Constitutional Commission to alter the wording to address this concern.

In his August 13, 2014 letter to Constitutional Commission Chairman Sean McWeeney, Dr Munroe wrote: “We fully support the general principle that women should have constitutional protection from discrimination with all the other forms of discrimination identified in Article 26. We also accept that the term ‘sex’ is used in Article 15 of the Constitution and that the term has to date been accepted as a reference to either male or female.

“It is therefore not unreasonable to consider that the insertion of ‘sex’ in Article 26 would carry the same historical meaning as it carries in Article 15.

“We therefore recommend that the term ‘sex’ be defined positively as a person who is born either male or female. This definition would ensure that Article 15 would not be subject to any future challenges on the ground.”

Dr Munroe’s letter added: “We do not think it unreasonable in the rapidly evolving world in which we live for the Constitution to decide that the term sex should be defined.”

When contacted yesterday by The Tribune for clarity on the role Dr Munroe played in the reworking of wording for the compendium of equality bills, Mr McWeeney termed Dr Munroe’s contribution as “very big.”

“We have never hidden his contribution in this regard,” Mr McWeeney said. “It was his work, well, work produced by his team of lawyers and himself that really bridged the divide between what we had and where we are at now.

“In terms of question four, it was his insight that moved us to rework what we had and stand comfortable knowing that what we had achieved all the points we needed.”

Days after Dr Munroe wrote his letter Mr McWeeney announced that the referendum questions had been simplified and that the government was expected to revise the Constitutional Amendment Bills in view of recommendations and present them to Parliament soon.

The revised questions took into account concerns about bill number four and a definition of the word “sex” as male or female has been included.

The Constitutional Amendment Bills were passed in Parliament earlier this month, however a date has not been set for the referendum.

Dr Munroe also spearheaded a consultation document on the Constitution in January 2013.

In that document Dr Munroe’s suggestions on the role of the Privy Council, limiting the powers of the prime minister, ensuring the independence of the Office of the Attorney General, creating an independent director of public prosecutions, creating an office of an Ombudsmen and ensuring gender equality.

Both Dr Munroe and his wife Ruth tragically died on November 9, 2014 in a plane crash with seven other persons on their way to Freeport.

The Munroe estate is administrated by their son, Myles Munroe Jr.