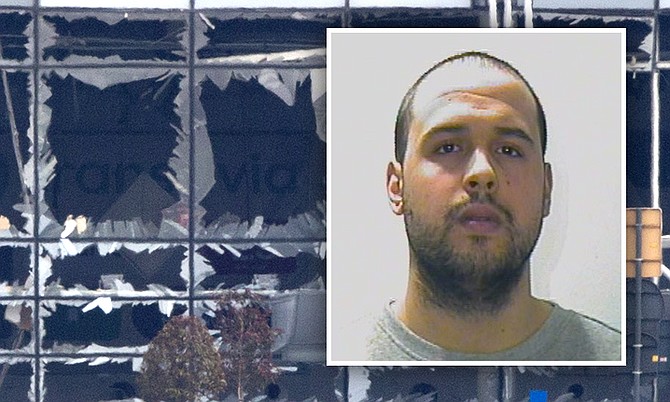 Khalid el-Bakraoui (inset) is suspected of being one of the men who carried out the deadly attacks on an airport (main picture) and subway station in Brussels.

UPDATE: It has been confirmed that Belgium bombing suspect Khalid el-Bakraoui was NOT Bahamian. Minister of Foreign Affairs and Immigration Fred Mitchell said Wednesday evening: “The Belgians have come back to us and said that the matter was done in error. And that it appears . . . both persons were Moroccan citizens at birth and assumed Belgian nationality. They have no explanation as to why is ended up being (reported as) the Bahamas.”

Earlier, Minister of National Security Dr Bernard Nottage had said there was no evidence that one of the men suspected of Tuesday’s bombing attacks in Belgium is a Bahamian.

After telling the House of Assembly on Wednesday morning that the Royal Bahamas Police Force (RBPF) was investigating if one of the men had Bahamian nationality, Dr Nottage later told Parliament that “there is no reason for concern here”.

“Prior to the suspension, I indicated certain information about one Khalid el-Bakraoui,” Dr Nottage said in Parliament on Wednesday afternoon.

“I wish now to inform Parliament that I have been informed that the Royal Bahamas Police Force has been in touch with the National Criminal Bureau of Belgium and the information that they have is that he is a Belgian and no evidence of him being a Bahamian and that he is deceased.  So even if there is concern there is no reason for concern here.”

Dr Eugene Newry, Bahamas Ambassador to the United States, signs the Book of Condolences on Wednesday at the Belgian Embassy in Washington as a tribute to the victims of the terrorist attacks in Brussels. The Belgian government has declared three days of national mourning.

Belgian officials identified two suicide bombers in the deadly attacks on an airport and subway station in Brussels as brothers with criminal records.

One of the brothers, 27-year-old Khalid el-Bakraoui, had been wanted by Interpol before the attacks, according to a red notice posted to the agency’s website.

Interpol listed that el-Bakraoui had dual Belgian and Bahamian nationality and had been wanted in Belgium on charges of terrorism. The Bahamian reference has now been removed.

In Parliament on Wednesday morning, Dr Bernard Nottage said there was no evidence to suggest the man was a Bahamian at this time.

“There has been a red notice published by Interpol which suggests that one of the persons who they are seeking, his name is Khalid el-Bakraoui, it (his nationality) is listed on the Interpol site as a Belgian confirmed and then it says Bahamian not confirmed. So there is a query as to the nationality of the individual.”

At the time, Minister of Foreign Affairs Fred Mitchell added: “We are checking. Our passport and naturalisation records do not show any such name. We are in touch with the Belgians to find out the basis for the claim.”

Khalid and his brother Ibrahim el-Bakraoui, 29, were named by officials to have detonated suicide bombs that led to 31 deaths and some 270 injured persons.

Belgian federal prosecutor Frédéric Van Leeuw told the press that Ibrahim and another man detonated the bombs at Brussels airport, and Khalid carried out the suicide attack at the Maelbeek subway station. Officials are still searching for a third man who was recorded with Ibrahim on a security camera.

On Tuesday, the Bahamas High Commission in London condemned the “savage” terror attacks as it extended condolences to the Belgium people.

The London office said that it was in contact with the Honorary Consul in Brussels and had sent out warnings to all Bahamian nationals in the city to take shelter in secured locations and avoid all public transportation.

“The Government of the Bahamas through its High Commission in London are closely monitoring the situation and extends its deep condolences and regret to the Belgian government and all those who have fallen victim today,” the statement read.

“Bahamian citizens are urged to be aware of local events, follow local authority instructions and to monitor local media for further developments. The Bahamas High Commission in London and the Honorary Consul in Brussels will continue to work to determine the status of all Bahamian citizens in Brussels.

“The Commonwealth of the Bahamas stands with the people of Belgium in this morning’s horrific attacks.”

Oh my f'in god! Don't tell me this terrorist got a real or fake Bahamian passport. If so, we are FINISHED!!!!

This is strangely disturbing, a lot of reputable international news agencies are reporting him as having dual nationality as well.

Still hoping that somehow somebody confused this one... like the many stories I remember reading about Mark Knowles, a tennis player from "Bahrain."

I hope Minnis didn't take fish from this guy too.

Comrade sweet Jesus, say it can't be so?

Nothing shocks me any more about this country. Our borders are so porous, we don't know who the hell is here! And to think they want to pass more bills to add more foreign spouses to the citizenship roll. Y'all vote for that nonsense and we are really doomed!

After the Nygard saga, I'm convinced guess anything can be bought - citizenship included!

Remember, citizenship can only be bought if we have corrupt officials willing to take a bribe.There's a long process and a lot of requirements before you should be granted citizenship. Get rid of corruption and get the FOIA up and running, then we all can hold our heads up and look in the mirror with pride.

Let's wait and get the facts before overreacting.

I thought Bahamians weren't allowed to have dual--citizenship.

Bahamians are allowed to have dual nationality. The subject is addressed on the penultimate page of the Bahamian passport.

Goodluck even trying to travel to cat island now ;)

FWEDDY them been selling Passports right along. You got no idea what a few dollars could buy in this country. Work Permit, Residency Permit, Passport. If they got the paper it could write. Why Nottage gotta say it ain't true. Why Fweddy can't say it. He got the files. Except this set probably kept outside the Ministry for safety and safekeeping. Well Muddoes, We need a Commission of Enquiry with power to sit from place to place. Bullfrog ain't gat no wing.

How many Bahamian passport holders have Swiss Bank Accounts ? An Arab with a few bucks would not be able to open an account in Switzerland but a light skinned Bahamian would not have a problem. Where you think Nygard transferred the five million to in the other story. Sure wasn't RBC on Bay Street.

Just look how the retards so quick to jump ship and turn against the Bahamas. At lest let the nationality of the bloody terrorist be confirmed before you jump to conclusions. My God!

Thanks God for BJ. He called and spoke to someone in his best Flemish accent and was assured. Whoever put that story out must have been dreaming of a Bahamas vacation.

PM Christie thinks its celebration time and wants to make it easy cheesy for everyone and anyone to get Bahamian citizenship.

One question for Mr. Christie and his herd of dumb goats.

Why would a foreign spouse to a Bahamian national need citizenship, when all they really require is belonger or other legalized status to reside and work in the Bahamas?

Children of a foreign spouse born to a Bahamian citizen in the Bahamas would be considered Bahamian. However, there is no sensible reason to confer citizenship on the foreign spouse.

With England being our closest counterpart, why weren't we told about this. Or the Bahamian government was informed and didn't tell its people. Interpol is very professional at what they do,so this just doesn't look good.

Hallelujah Jesus and AMEN for keeping Khalid el-Bakraoui off Immigration Minister Freddy’s deport list. The minister done got’s he hands full with Izmirlian, Bacon, Rufa, King's Counsel Freddy & his two Cuban sidekicks, Save The Bays.
Now, it looks likes the minister about add the ‘intelligence’ of the grieving mother of the plane pilot who died in Haitian prison to his list?
Now that one I am not sure about....how do you go looking for 'intelligence?'
Had Khalid el-Bakraoui been added – the Minster would’ve been too busy looking for whole network of Jihadists – leaving the King’s Counsel, fall through the cracks.

You can't label a whole religion because of the actions of a few. If that was the case, I think many of us would never follow religion at all. Christians, Muslims, Jews, Hindus and Buddhists have all had their share of people committing violence against others. Yet, I haven't heard the call to eradicate churches, temples, or synagogues.

Islam does not incite its followers to kill the followers of other religions. Terrorism is indiscriminate. Muslims are affected by terrorism and want peace just as much as people who are not Muslim. And all countries including ones where Muslims are the majority like Turkey and Syria are targeted by terrorist groups like ISIS. We need to think more about the reasons which push these people to do this, and teach each other how we can learn to be more tolerant of each other. Hate only begets hate. Peace!

Islam is one of the largest religions in the world. As matter of fact there are billions of us globally. I know that there is a lot of misconceptions about who we are and what we believe. But realistically, if Islam was a religion that "incite their followers to kill the followers of other religions" a lot more people would be dead. Maybe you can do a little research and educate yourself...... might be surprised at what you find

I hope they are right but I think Dr. Nottage is wrong because it clearly states Belgium, Bahamas

I swear this Comrade Khalid el-Bakraoui looks me likes he could very well be from one them settlements situated southeast of the Bahamaland's capital of Nassau, Town, which is smack in what Loretta claims be her domain?

He do looks like a Treco or a Knowles or a Burrows. Definitely somone from Deadman's Cay or Hamilton's area. Could be from Simms' too though or even Dean's. You gotta go down there and get some DNA samples ro test. Not Bran kinda DNA Though.

Pathetic, they'd rather make themselves look like a pack of fools by blaming 'Bahamian terrorists' that state the truth: it's always been men, ages twenty to forty, from the mid-east.

Could be wrong about this, but according to all the maps, the Bahamas is not located in the mid-east.

They'd rather indict their own mothers than call it what it is: jihadist terrorism.

Of course, these are the same Belgian whizzbang authorities who recently mocked anyone who warned that Belgium was ripe for a terror attack, and laughingly dismissed any possibility of same.

Comrades the Tribune's headline reads:
"Updated: Belgium Bombing Suspect Was Not Bahamian."
Point me in the direction where there has been an official confirmation that gives any credibility such an headline- cause I am unable to find it anywhere?
Believe me the Comrade most definitely come into contact with someones lick-da=brush colouring brush?

As weird as it is, this should have been a wake up call to those playing the fool that you don't a** around with the phrase "national security". While they wasting time showing their behinds with Nygard and digging through private citizens' emails, they should be focusing their efforts on preparing the country for real threats like dumb people, crime and illegal migration.