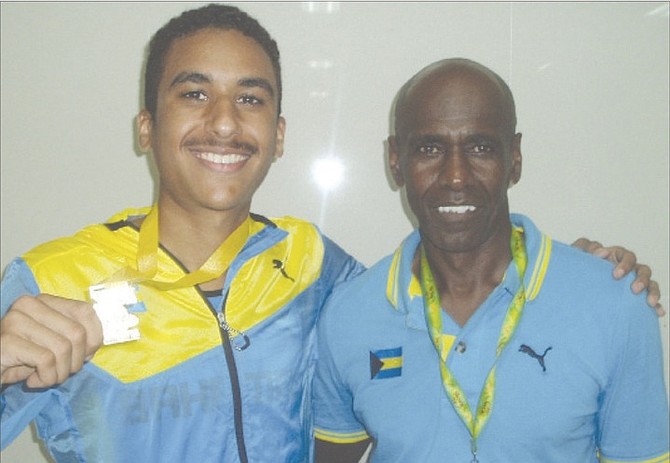 BENJAMIN NAJMAN shares a special moment with coach Michael Armbrister after winning gold in the 5,000 metres.

St George’s, Grenada — Despite a couple of bizarre turn of events, the BTC Bahamas Team actually ended up with a third place finish with 33 medals, including five gold, 15 silver and 13 bronze based on the gold medal tally as the 45th Carifta Games came to a resounding end last night at the Grenada National Athletics Stadium.

In the biggest blunder of all, Benjamin Najman ran away from the pack in the 5,000 metres and lapped just about everyone in the 10-man field and by the time he had completed the 12 1/2 laps, the officials claimed that he still had another one to go as the bell didn’t go off for the final lap. Najman walked off, claiming the victory, but it was not until team officials rushed onto the track and began the process to lodge a protest that the meet officials made it null and void, giving Najman the victory.

The time: 15:24.25 pushed Team Bahamas’ gold count to five, surpassing last year’s total of three as predicted by team officials prior to coming to Grenada. But although the Bahamas collected more medals, the international rules for major competition is based on gold and Barbados had one more, dropping the Bahamas from second place last year in St Kitts and Nevis to third.

“I just want to thank God because I worked really hard to get this,” Najman said. “I’m so glad that I got the gold. All of my hard work has paid off. I just want to thank my mom and everybody who was supporting me. I wanted to do something different that has never been done before in the Bahamas. I won a silver and bronze before, so it was good to win this gold. I run this so many times I know when I ran 12 1/2 laps.”

Team Bahamas distance coach Clinton Smikle was one of those who lobbied for the correction. He concurred with Najman.

“I was coaching him during the laps so I knew that he had finished,” Smikle said.

She just missed getting a medal in the long jump, clipped the top of the ninth bar and saw her chance in the 100m hurdles come crashing down near the final line, but it wasn’t over for Charisma Taylor. She bowed down and rose above the ashes to claim the gold in the girls under-18 triple jump to complete what was what expected to be a grand showing in Grenada for the multi-talented athlete.“The first six hurdles was rather easy for me, but I really don’t know what happened. I just felt my feet clipping the hurdle,” said Taylor as she tried to hold back her tears. “But after I didn’t get any medals so far, I just knew that I had to get one in the triple jump. I really couldn’t leave here without getting anything. I’m glad I got the gold.”

While Taylor didn’t complete the race, Sasha Wells powered through for the silver in 13.48 to finally get on the podium after she fell short in her previous two trips to the games.

“I could see what happened because she was in front of me,” Wells said. “She’s my team-mate, so I had to keep focusing on my race. I PRed and I finally medaled.”

In the boys under-18 110m hurdles, Bronson Rolle made up for his close fourth place finish by pushing through to a silver in 13.80,

“Before the race, my mother told me to keep focused on my race because God had a plan for me,” Rolle said. “It was disappointing, but I had to use it as a learning process. It was motivation for me.”

Kaylea Albury could only muster a fourth place finish in the girls under-20 100m hurdles in 14.11, but Team Bahamas struck silver and bronze in the boys under-20 110m hurdles as Tavonte Mott ran 13.81 for second and Shakeem Smith got third in 14.12, both qualifying times for the IAAF World Jr Championships. Mott had a chance to win the race, but clipped the final hurdle as Rohan Cole from Jamaica surged from behind to take the tape in 13.71.

“It feels good to know that I’m looking good for next year and knowing that I could get the victory,” Mott said.

Team Bahamas followed those performances with three more medals in the 200m.

Devine Parker, the silver medalist in the 100m on Saturday night, got the bronze in the girls under-18 race in 23.86.

“i feel very good. I think I got out good. It was a lot of hard work. Once you put in the hard work and if you stay dedicated and committed to the sport, it will pay off in the end,” Parker said.

Kaze Poitier was short of getting on the podium in the boys under-18 race as he got fourth in 21.82.

But in the girls under-20 race, Jenae Ambrose clinched a silver in 23.39 behind Barbados’ Sada Williams, who won in 22.72 to add to her triumph in the century. Brianne Bethel was fourth in 23.93.

And in the boys under-20 half lap race, Keanu Pennerman picked up a silver in 21.03 with Samson Colebrooke taking sixth in 21.19.

“I felt great. I think I did great. I did better than I did at the Carifta trials, so I feel good about myself,” said Pennerman, a freshman at Purdue University. “I just didn’t want to let no one younger than me beat me. I am in college and so I should be more experienced, so I wanted to use that to my advantage.”

Another outstanding performance came from Denvaughn Whymns, the 15-year-old boys under-18 long jump champion with a leap of 7.16m (23-6).

“I had a little problem with my leg, but I managed to pull through,” said Whymns, who had to compete in the second flight when hardly anybody was around but a handful of Bahamians to cheer him on. “I just blocked out everything and I just thank God for this gold medal.”

“I felt good about the shot. I’m grateful that I still got a medal, so I have to look at the brighter side,” Brown said. “I was just glad that I was able to add to the medal count for the Bahamas.”

As the games came down to a close, Team Bahamas picked up three medals, but was unable to stop the dominance of Jamaica, who swept all four 4 x 400m relays, just as they did the 4 x 100m relays on Sunday.

The girls under-18 team of D’Nae Freeman, Megan Moss, Gabrielle Gibson and Brittni Fountain clocked 3:43.08 for the silver behind Jamaica, who pulled away from start to finish to tape the tape in 3:39.31.

In the girls under-20 race, the Bahamas team of Shaquania Dorsett, Janae Ambrose, Brittany Bethel and Breanna Bethel ran 3:48.06, but they couldn’t match Jamaica as they surged to the finish line in 3:34.84.

And as the curtain came down in the grand finale, the Bahamas team of Kinard Rolle, Kendrick Thompson, Holland Martin and Bradley Dormeus had the lead from the start. But going on the final back stretch, Dormeus couldn’t hold of the Jamaican anchor led and the Bahamas had to settle for second in 3:12.99. Jamaica completed the sweep of all of the relays in 3:10.55.

• Team Bahamas will leave Grenada around 8 pm and should arrive in town after 11 pm.

The 46th games will be heading to Curacao next year, while the Bahamas has won the bid at the congress on Monday morning to host the 47th edition for the seventh time in 2018. The 48th edition will go to the Cayman Islands in 2019.

Here’s a look at the medal winners for Team Bahamas:

Here’s a look at the medal count for the 45th Carifta Games: