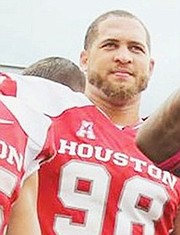 THE Cincinnati Bengals signed Alex Cooper as an undrafted free agent because of his versatility on the offensive line and that characteristic was on display immediately during his first appearance with the team.

The Bengals hosted rookie mini-camp last weekend at Paul Brown Stadium in Cincinnati, Ohio, and Cooper was introduced not only to a new team but to the centre position, a new spot for him on the offensive line.

The Bengals offensive line coach, Paul Alexander, alerted Cooper that if the team brought him in to camp, he would be required to get some repetitions at centre, news which prompted the Eleuthera native to practice with anyone who could snap the ball to ... including his girlfriend.

“I told her this is something we’ve got to do. Team effort,” Cooper told Geoff Hobson of Bengals.com. “I had heard from other coaches that I’d have to play guard and centre if you’re going to play at the next level.

“That sent shivers down my spine because I like to be out in space as a tackle. (The quarterback exchanges) weren’t as bad as you think for two guys who had never done it. I’ve got an open mind for anything.”

NLF mini-camps are geared toward getting the newly-drafted rookies acclimatised to the league playing schemes.

It also gives coaches and team administrators the chance to see their new players in action learning plays from their new team’s playbook.

Several veteran players of each team will also attend mini-camp to refresh their skills and become acquainted with the new players coming in.

Cooper was one of 15 players signed as an undrafted college free agent by the Bengals following the completion of the NFL Draft.

Undrafted players made up 29 per cent of NFL rosters last season and within the Bengals organisation, six players were undrafted free agents including All-Pro linebacker Vontaze Burfict.

Following his stellar senior season with the Houston Cougars, Cooper garnered the attention of several NFL teams, including the Houston Texans and the Oakland Raiders.

In his senior season he was one of the anchors on an offensive line which powered the high-scoring Cougars’ attack. Cooper was named All-AAC and Phil Steele’s AAC Second Team selections. Cooper started 25 straight games on the Cougars line at various positions, including both tackle spots and right guard.

Cooper and his line mates led a Houston team that is 14th nationally in rushing offence at 240.1 yards per game. Houston’s leader along the line with 892 snaps, Cooper did not allow a single sack last season and conceded just eight quarterback pressures.