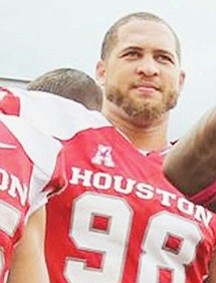 THE Cincinnati Bengals signed Alex Cooper as an undrafted free agent because of his versatility on the offensive line and that characteristic was on display immediately during his first appearance with the team.

Alex Cooper signed by Bengals as an undrafted free agent

ALEX Cooper didn’t hear his name called during the three days of the NFL Draft, but the Eleuthera native didn’t have to wait very long after to learn of his new opportunity to make an NFL roster.